With the autumnal equinox past, the clear days and nights no longer mean warmth. As the sun's rays weaken by the day and the window of light grows shorter, these high pressure systems that sit tight for weeks become synonymous with cold snaps.
Just this morning the mercury made it to 27 degrees and Anchorage saw flurries.
In the mountains fall has hung on for an exceptionally long time but a kicked up north wind is shaking loose the leaves, and higher up white is becoming a common sight.
This weekend I put in two mountain rides.
On Friday I met up with Adam R about mid-day and we headed up to the south end of Johnson Pass. (MAP LINK)
With another week without rain the trail was just a little bit better, though the carpet of yellow and orange was noticeably thicker. 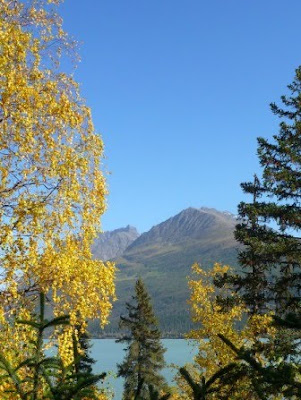 A peak at Lark Mountain through the trees. 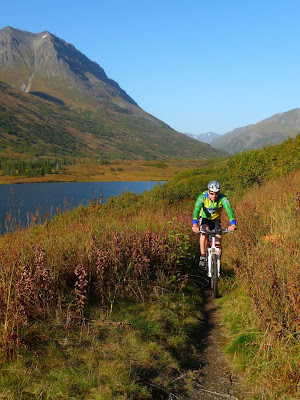 (click to enlarge) This ride Adam and I did go all the way to the pass. Here's a shot on the way back passing Jonson Lake.
The ride was a good mix of bantering and hammering, and Adam was great partner as he pushed me on the climbs while I pushed him on the descents.
Though we had comfortable temperatures in the pass, on the way back down as the sun set the cold air felt especially biting.
Interestingly enough, we also noticed about 6-7 miles from the trailhead on the way back there appeared to have been a skirmish between a moose and an unidentified attacker between the time of our passing.
The trail was covered in moose fur and big skidding hoof tracks, but with the soil so dry and neither of us having any intentions of hitting the brakes, I couldn't make out what other tracks, if any, there were.
While moose are in rut now, I wasn't under the impression that their battles involve much more than horns. Had it been a bear going after a moose, which seems very likely, I would have expected to have seen some large claw scratches in the ground, even traveling. Maybe wolves?
It's a little mystery that I guess I may never know the beginning or end of, but I can say I'm glad we didn't round the next corner and find a big griz sitting on a fresh moose kill.

On Saturday, still feeling a good buzz from the previous day's ride, I headed up Crescent Lake Trail on my own. 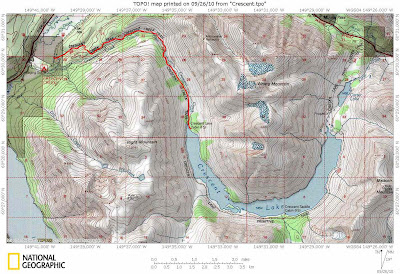 (CtE) The 12 mile round trip ride was just what the doctor ordered I think. 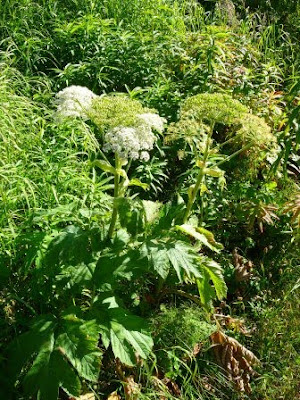 In a slide path where snow held through much of this cool wet summer (Photo flashback LINK) I found a vertical line of vegetation that, having only been out of it's icy lair for a few weeks, was growing like it was late June. Here a Pushki, or cow parsnip, most of which have been dead since late July, is still blooming. It was quite the contrast next to all the dieing growth. 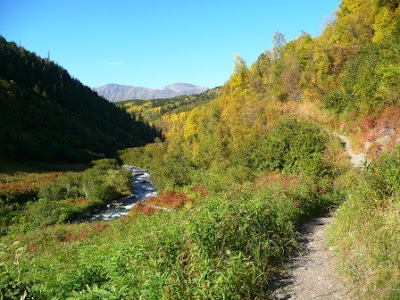 Looking back down the Crescent Creek Valley. 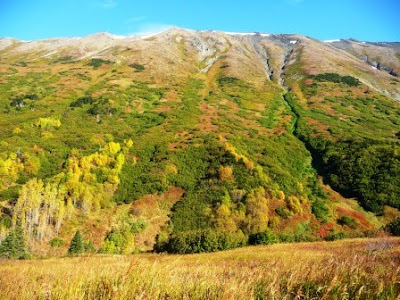 The long ridge of Wrong Mountain. 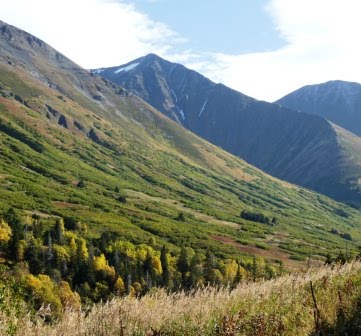 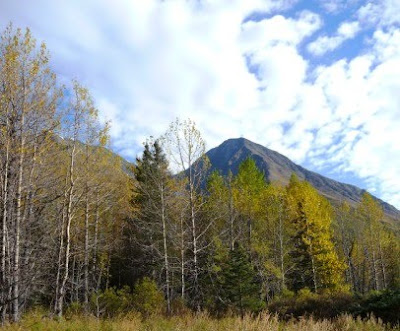 Peak 5320, the high point of the Wrong Mountain massif though not the official summit. Notice the dusting of snow. 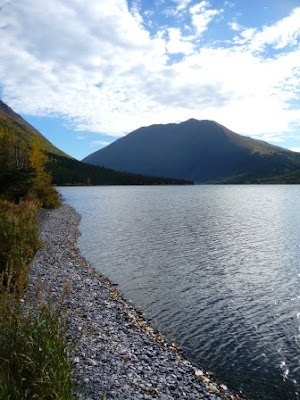 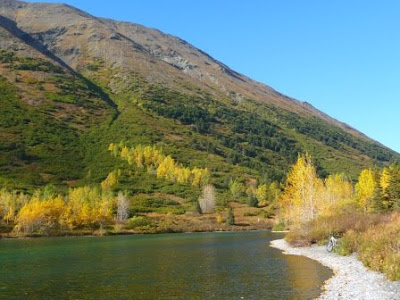 The forest service cut a new access path to the beach at the outlet of the lake so hikers and riders don't have to walk next to the cabin. With the water down, I ride along the shoreline, dipping into the shallow waters to get around a few patches of willows, to the campsite beach, to make a nice loop. 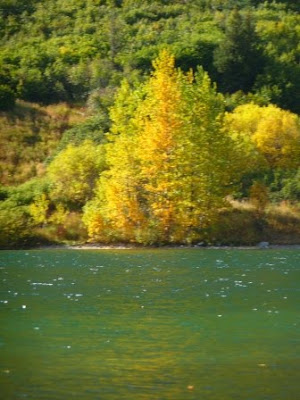 Somehow this picture sort of described my state of mind for the half hour or so I spent on the beach. Not focused, but not unhappy about that either 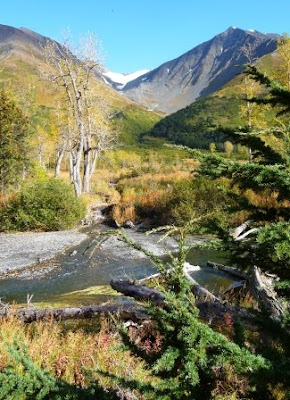