Not the least: The rest of the East

This post comes to you from the north again. I arrived back in Anchorage Sunday night after a very long couple of flights from New Jersey.

On the 29th Andrew and I did a skate ski in Goshen. It was Andrew's first time out on skinny skis this year, and we found overall pretty good conditions. 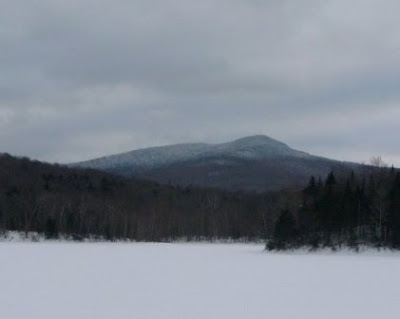 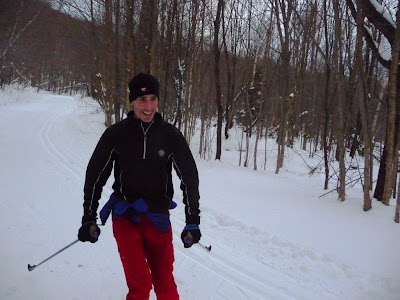 Andrew is all smiles.
The skate was my last outing on skinnys for the trip, and I have to say, perhaps one of the best presents I got this year was from mother nature. The snow was exceptional for my trip and I was able to put both my classics and skates to work. On top of this, I was pleasantly surprised to find that all the old trails were just as fun as I remembered them to be. We here in the north may be blessed with a long season, but many of the trails I ski here simply don't hold a candle to the "character" of VT trails. Here, ours are bulldozed smooth, crowned for easy skating, wide for long diagonal strides, and groomed meticulously. In VT, you're always on your toes (or heels) hopping over water bars, nimbly stepping over rocks, roots, and big sticks and hanging on in soft corners. The trail corridors are often narrow too, a single lane for the most part with high sides and a low bottom, and the trails, well, they run through those open stands of hardwoods like dark maple syrup dribbles and winds its way down a stack of pancakes in no particular hurry. I foresee an East coast trip in the future that will focus more exclusively on skinny skiing. 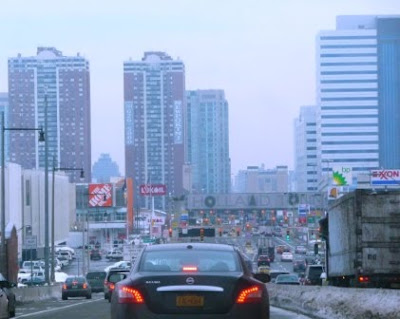 Red light district? On the 30th we headed back down to NJ, and on NYE day, Bernie picked me up on his way back into the NYC. 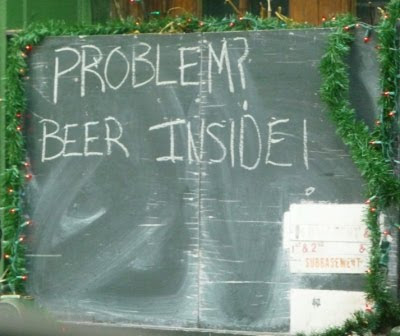 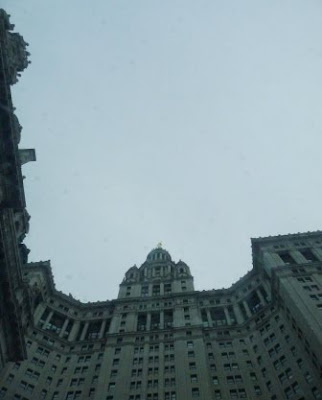 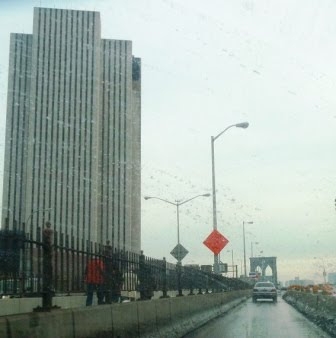 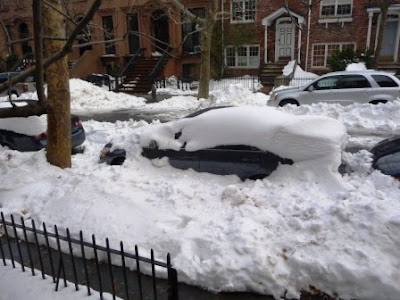 NYC had more snow than Anchorage, a fact that many found to be pretty funny. A big blizzard had dumped a pile of snow on the region and many cars still looked like this one even a week after the storm.
We spent NYE in Brooklyn, meeting up with Bryan and Abby. Rachel took the train in later and met up with us. 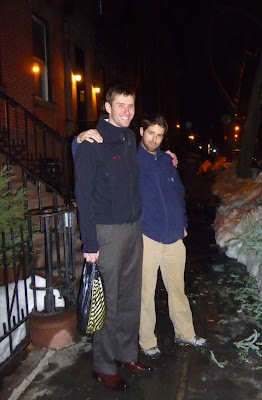 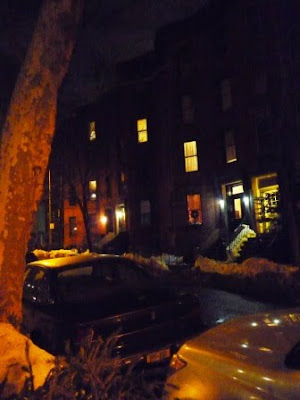 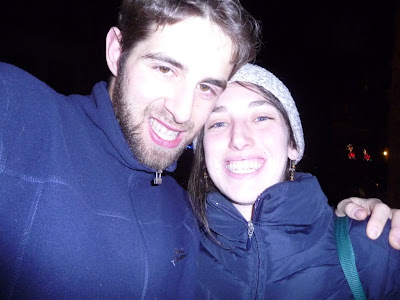 A failure at trying to document our purple wine-teeth proved successful on other fronts. 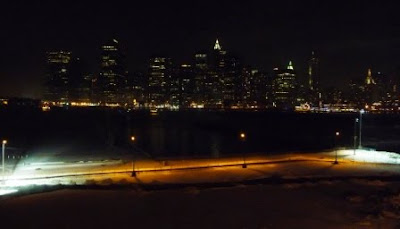 The skyline from the Brooklyn Promenade. 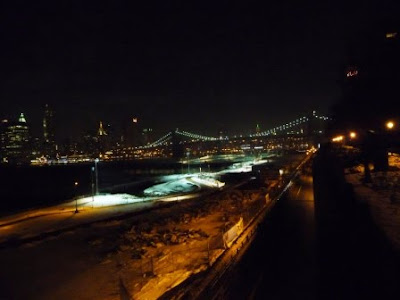 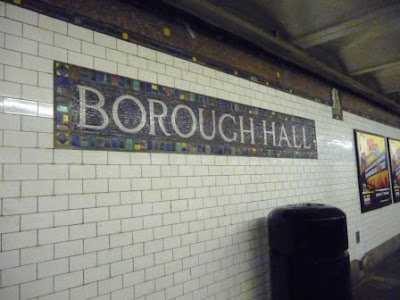 After a night of celebrating, we took the very long train back to NJ, starting with a subway ride from Brooklyn. 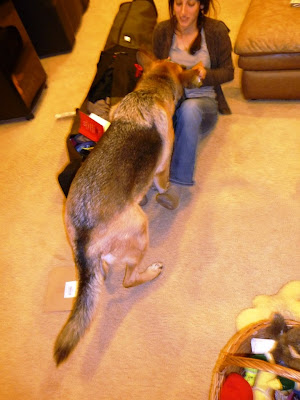 Sheba is always in a mood to play.
New Years Day was a quiet one spent in NJ. We hung around the house for most the day and ended the trip much like it started, with another excelent dinner with Rachel's folks. 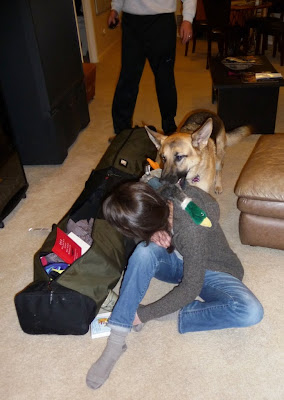 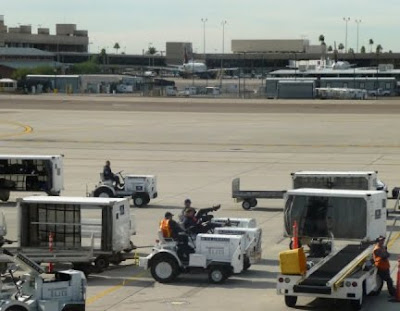 Phoenix.
It's hard to believe that 11 days could go by so fast or so well. I'm feeling pretty lucky right now to have spent the holidays with so many great friends and family, and while I was hoping the trip might cure some occasional but recurrent homesickness, I've found myself wondering how things are going back there a bit more as of late, while still appreciating the things that make living up here so good just a bit more too.
Thanks all again for a great trip, hope to see everyone up here or back there soon.
Posted by Dante at 9:43 PM

I was really confused when I started reading this post -- until I remember that my name is "Bernie," and not "Andrew." Then it all made sense.

It was really great to see you, and I'm looking forward to checking out your home later this year.

P.S. As much fun as drinking is, I'm definitely excited to get outside for the next visit.

The affinity for the Vermont trails comes from feelings of home rather than the crudeness of rusticity. Remember, this is the same guy who would groom Tsalteshi rather than go across the Sterling Highway and ski the refuge.

Anon. The feelings for home play a role, but with no disrespect meant to the KNWR HQ trails...the creases in my palm are more interesting. That being said, I really enjoyed them the few times I skied there, and this time of year, if there's some fluffy dry snow they're great. But they go no where, they see nothing, and when the weather goes south so do they. If I wanted to ski tight loops in hearing distance of a highway, then I'd go across the street. (Wait, that's what I do.) When KNWR shoves some regularly maintained singletrack classic tracks that actually go somewhere (and Bill heading out on a whim and blazing his own out-and-back is pretty debateable for qualifiying) then I'll reneg and head on down.