Last week Dan H, who I met a few weeks ago skiing on Pete's North, shot out a message looking for extras to fill seats on a cat skiing trip in the Girdwood area.
He didn't have to ask me twice.
Cat skiing, for my non-snowsport enthusiast readers, has nothing to do with felines, but instead involves catching a lift up the mountain, generally in the backcountry, on a converted snow cat fitted with a cab in the rear for hauling passengers instead of grooming equipment.
Girdwood-based Chugach Powder Guides (LINK) runs just such an operation less than an hour from Anchorage with two machines that depart from The Hotel Alyeska's backdoor and take skiers and riders into the snow-hammered slopes of the Winner Creek area.
The price of admission was better than right for this adventure, and while it was still more than twice the cost of a lift ticket at the ski resort, and well over 100% more than the cost of a self-powered day in one of the passes, it was still a neat and new experience not worth passing up. Unlike the former two options, this offered relative exclusivity (our crew was comprised of 12, and CPG's second cat was operating in the area with another group of roughly the same size), as well as the ability to cram in more vertical feet than would be feasible this time of year under human power. Our total vertical for the day was 11,200.' Such a day under self-power would be a truly epic feat, possible only in April or afterwards.
Dan deserves a great deal of credit here too, not just for handling the logistics, but also for putting together a group of 12 skiers, tele-nuts and single-planker-wankers, that were about as close in abilities as such a group of that size can be. While I don't remember half of everyone's names, everyone was incredibly courteous and friendly. Our guides actually made fun of us through the day for being so courteous to eachother and trying to make sure everyone got a chance at first tracks. 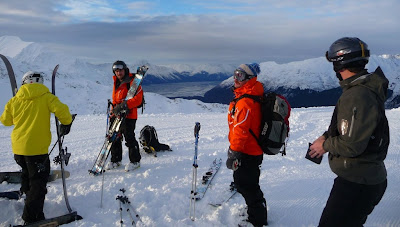 Our two guides for the day in the orange jackets (whose names' I regret to say I've also forgotten) prepare the group for the first run. As with the fishing industry, not all guides are created equal, and sometimes a truer test of quality is not whether they can catch fish, but can they find the fish when the fish are thin and still keep the clients happy. Our two CPG guides had far from the greatest conditions to work with, but they sniffed out what good snow there was for us, kept everyone together and safe, and kept the attitude light and positive all day. You can't ask for a lot more. The weather was perfect: temps in the high-teens to mid-twenties, blue sky most of the day and breathless wind. Unfortunately, calling the snow wind-licked would be an understatement. Wind-slobbered would be more fitting. Much of the snowpack looked either like this (a mostly supportable wind crust ontop of some cush powder) or was rain/wind/melt crusted in the trees. There was a narrow sweet spot inbetween where the blown powder was deposited, but not affected by the recent warm temps. 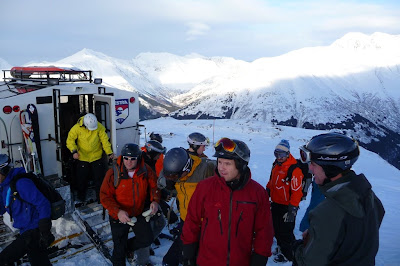 Unloading for another run. 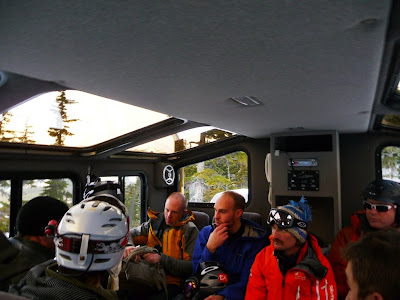 Inside the cab. Skylight windows, buckets seats, and tunes to go with. That's a lot more comfortable than skinning. Michael enjoys the view out over Turnagain Arm.. The cat could get to some pretty tight spots and plenty high-up. 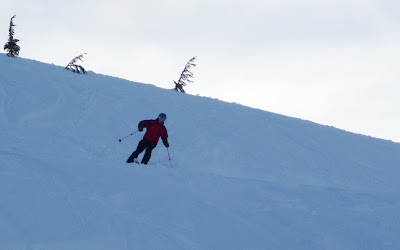 Dan tears down a slope. 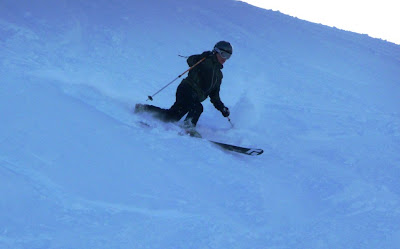 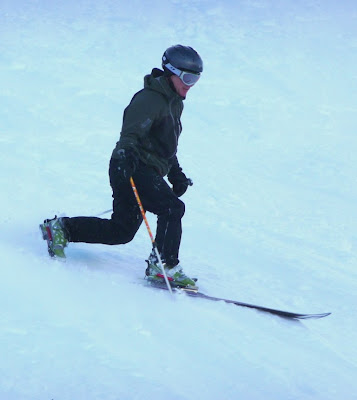 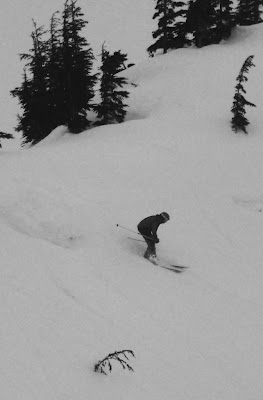 Dan lands a 2-3 foot drop off a wind cornice. Getting the low-down at the top of a run called Rock Star, which proved to have some of the best snow all day. 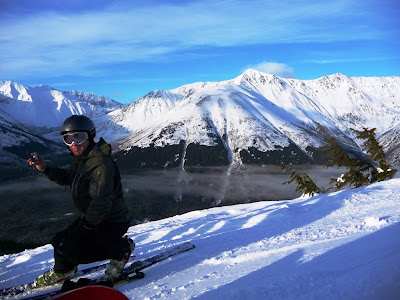 A maritime mist rolls off the Arm and into the valley below. The peak to the center-right has some excellent looking epic-day lines. 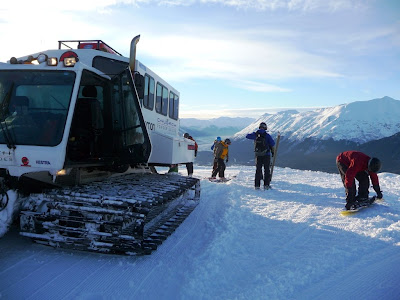 Last run.
Glad my computer cooperated to get this post out!
Posted by Dante at 9:57 PM

I take back my last post, suggesting that you spend money on a computer. This post confirms cat skiing is definitely a much better way to spend your money.

Glad you agree! Sadly, my computer may still require an expenditure of its own. At least, like I said, it's playing nice for the moment.

I love the "maritime mist" picture.