A taste of what's to come?

Before this post gets going, I just want to take a moment to mention that, while the news is old now, the very reason this blog is even here, or the place really, has been swept off its feet by a devastating earthquake.
I can only imagine. CHCH was by far the nicest place I've ever lived, and I'm concerned as to how it will rebuild itself. It's easy to say "donate," that's probably enough, and I plan to, and hope some readers who feel so obliged might follow suit. But filling out some online form and clicking a "submit" button just isn't all that satisfying when you have a lot of memories tied to where that money is going, and knowing that no matter how many times you click that button, it may not ever be the same.
I want to be there now, doing anything, doing something, not clicking keys on my keyboard though.
I should say also that the disaster in CHCH hits home not just because it once was home, but also because just a bit less than 50 years ago, the city that I now call home was basically leveled by a quake, and may very well suffer a similar fate again someday.
It seems, however, that disappointingly, a hot-headed and soon to be out-of-power third-world warlord's speech has managed to syphon off most of the global media's attention from NZ. Neato.
I'm still with ya m8's.

On a much less somber note, the Kenai Gods were smiling this weekend. Friday saw the arrival of a rather strange but cold little snow storm that brought percipitation in an odd pattern.
The storm tracked up Cook Inlet, but instead of depositing it's load in the Western Susitna Valley or the Anchorage Bowl as such storms usually seem to do, it spun down Turnagain Arm and dropped a foot or more in Indian - not exactly an area known for heavy snows.
Even more strangely, a band of percipitation became sandwiched over Summit Pass. Typically these Cook Inlet-track storms deposit little if any snow in the Kenai Mountains. In this round however, Summit picked up 12-16 inches by Saturday morning, yet neighboring Turnagain Pass, which ussually picks up three times or more what Summit gets, only got half of that.
Best of all, unlike the majority of storms that have come through the region this winter, this one was unaccompanied by wind or rain. Indeed, the temps were pretty bitter and the snow that fell had a dream-like quality, literally exploding into billowing clouds when torn through by board or skis.

With the avalanche forecasters raising the skull and cross-bones in Summit on Saturday morning, I hitched up with Jack, and headed to Pete's North at the south-end of Turnagain. There we rendevouzed with Josh O, who was accompanied by the "Seward Crew."

While Jack and I were generally out of sync with everyone else on the mountain, we traded intel with Josh and co. and stories as our laps crossed. 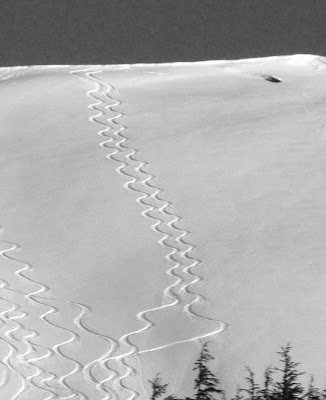 Over on Lipps, a little abstract ski art to add to my collection. 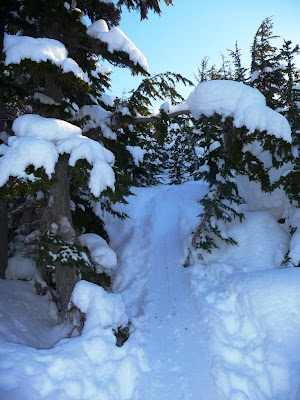 The trees are the keys. Down in the woods the snow was deposited at least a foot deep. In the alpine the snow as shallower, and as the day wore on and the wind picked up, the ridge lines were blown clean. 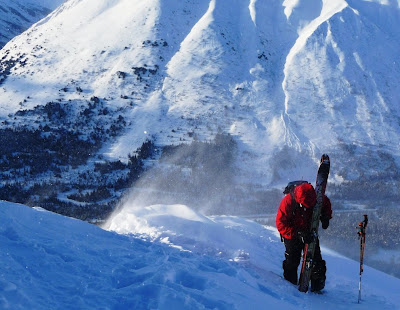 Nature's snow guns. Jack is blasted by a constant jet of snow, funneled up the slope and through a cut made into the cornice near the summit of Pete's
With unbelievably rare consistent snow conditions from summit to highway-level, Jack, and I took advantage of the well-established uptrack and pumped in five laps that tallied apx. 1,500, 1,200, 1,200, 1,000, and 2,500 feet, for an epic 7,500-foot day. Temps at launch at the highway were single-digit, and wind gusts at nearby ridgetop weather stations reported winds topping 40 mph.
Even as my legs throbbed on the drive home, I knew damn well these were the best conditions of the year and reports from Summit, compliments of Tele-Pete, told me I'd be a fool not to go Sunday. With not too much convincing, Josh signed on for more. 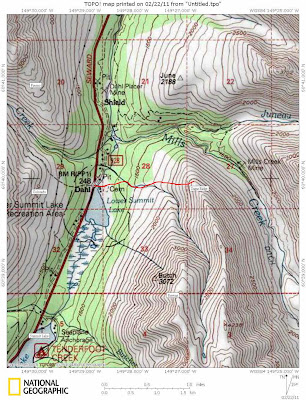 We headed for Sugar Ridge, which is actually the lower part of a thin ridge line that runs just east of Ravens Ridge and forms the long northeastern shoulder of Halebop (LINK). 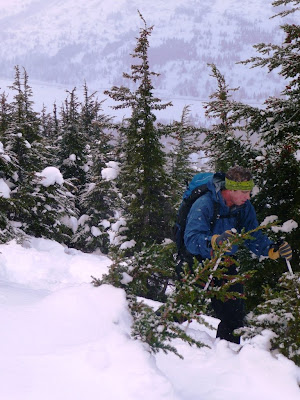 While winds had knocked down overnight, they were predicted to pick up again through the day, and Sugar sits in the lee of Halebop and Raven's, and is also well-treed and lower angle, meaning it offered protected skiing in lower visibility conditions with lower risk in regards to Summit's stability concerns. 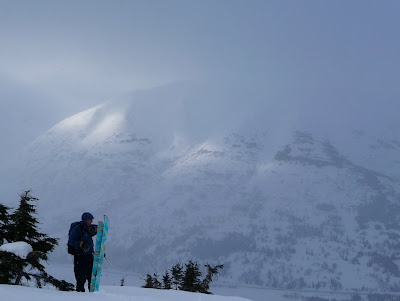 Temps were a bit more comfortable in the high teens, and heavy fat flakes fell through most of the day, yet, in classic Kenai style, the sun was almost always shining, even as the snow fell sideways. The shoulder of Colorado had the same sun lighting it all day, though no opera music emanated from the clouds as the picture would suggest. 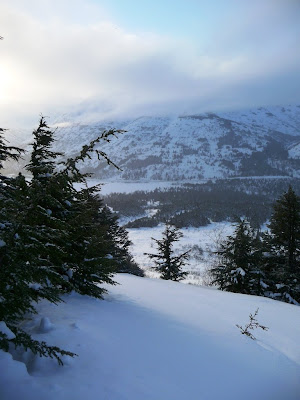 A "Dante line" through the trees. 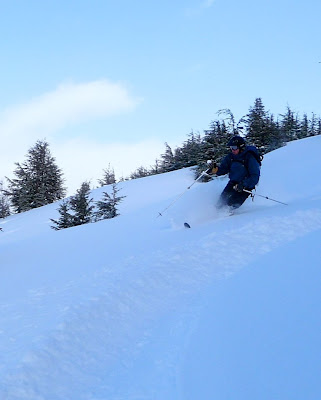 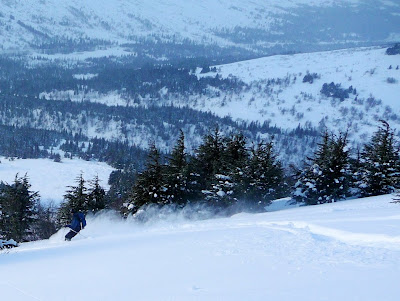 Since Josh still hasn't updated his blog, I stole two of his pics from the Facebook of yours truly. He gets credit for both. 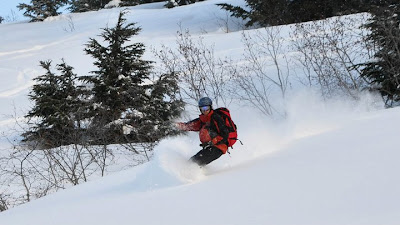 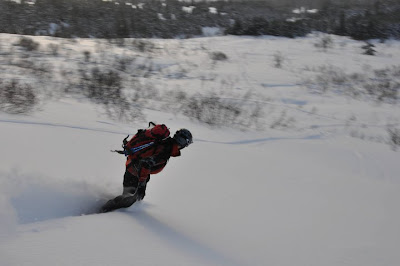 7,500 feet and back for more the next day. Who needs a cat when you're an animal?

And a heck of a lot cheaper to boot.