These last few weeks the stars, the moon, the sun and the snow have all been in line to make for some spectacular late season backcountry.
Let me rephrase that, it hasn't just been a few weeks, it's been a season.
Alas, all good things must come to pass, and for the Kenai Mountains, powder has indeed become just that, a thing of the past.
Jack and I trekked high in summit pass on Saturday in search of the fine white substance but found little to speak of.
Indeed, a good storm could still roll through and re coat the upper slopes, but one would have to climb high and climb fast to reach it before the sun's powerful rays had their way.
Meanwhile, the world below is warming and greening fast. It's time, time to switch seasons.

Perhaps my weekend was a little too foretelling.
I started my Friday with a heavy dose of spring cleaning, before driving to the east of Kenai Lake in Cooper Landing to do a long road ride.
I pushed up and over Summit Pass to the Hope Junction, crossing Canyon Creek before doubling back for a total of 54 miles. Along the way I crossed paths with Justin, who had started at Tern Lake and gone all the way to nearly Turnagain Arm before turning around.
The ride was an on again off again battle with winds that came from all directions and temperatures that swung from solar oven hot to arctic chill cold.
The sun shone though, and I enjoyed the bike pace versus the car on the Seward Highway's wide shoulder to gaze longingly at the many lines on the many peaks I passed; some I've skied, some perhaps for another year.

Famished from my ride, I loaded the bike and headed north for Anchorage to spend a warm and hospitable night at Jack and Cindy's home on the hillside above the city. 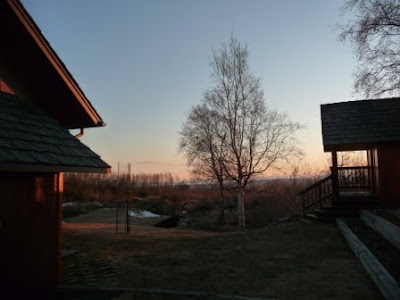 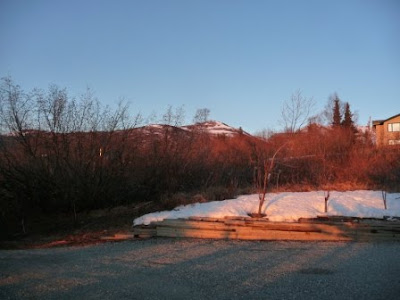 Jack and I discussed plans for the next day, concluding that while the towering Talkeetnas might hold treasured powder up high, their windstripped lower elevation snowpack would be so miserable as to make the trek not worthwhile.
Byron Peak and its glacier however, in Portage, piqued both of us, and the plan was set.

The next morning after a hearty breakfast, we made our way south. Observation revealed however. that the glacier and the slopes surrounding it were still quite active, and while we could probably sneak up the gorge unscathed, the ski out would be less than enjoyable over so much debris.

What to do?
I've had my eye on a north facing bowl on a summit tele-Pete has referred to as Hale-Bopp, a peak that rises to just under 5,000' off of Raven's Ridge (link) in Summit Pass.
I first caught sight if this bowl in late January when Jack and I skied off the top of Raven's.
Its height and orientation seemed to bode well for protecting powder, though the approach (red line) was a long hot grunt to say the least. 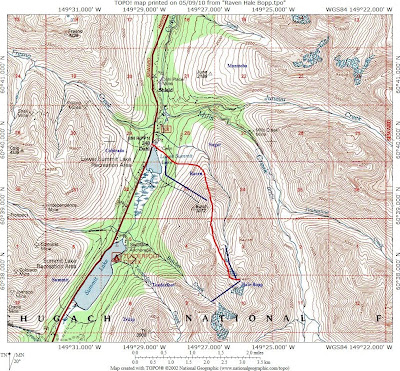 Map courtesy of Jack.
Jack and I left from Lower Summit Lake at 12:30. We skinned up on warm corn snow to about 2,500' before we hit icy sun crust.
Soon enough we were booting. For a ways my soft snowboard boots were OK, but as the grade steepened and the ice hardened, having left crampons in the car, I had to rely on Jack to kick steps in with his hard boots. Another strike against the board I suppose. Had it not been for Jack's plastics, I would have been staying low.
We eventually reached Raven's windblown and bare ridge where we walked across the tundra until we hit a reasonable sized patch of snow on witch to approach the base of the summit bowl. 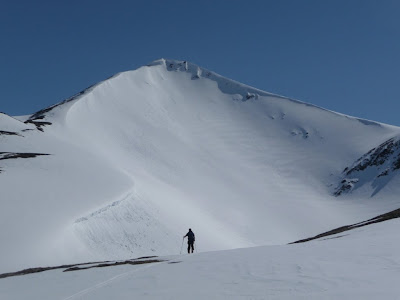 Alas, even high on the bowl we found only marginal snow and were soon enough booting again to make the looker's right skyline. 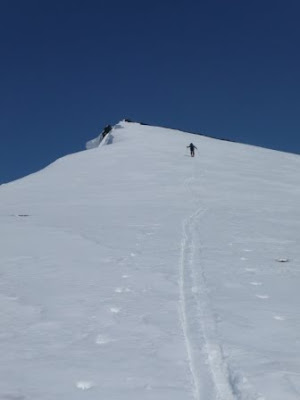 Four hours and nearly 4,000' above the highway, we finally reached the summit, pretty well exhausted. 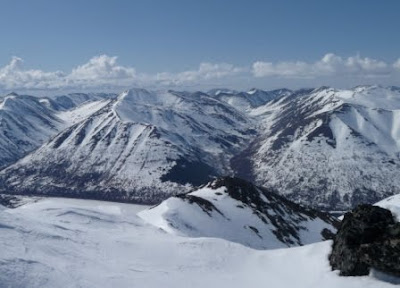 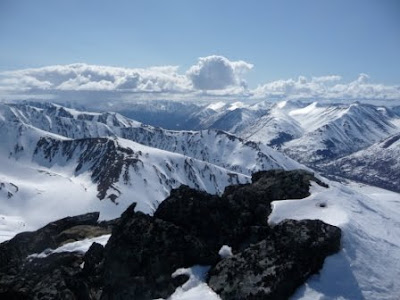 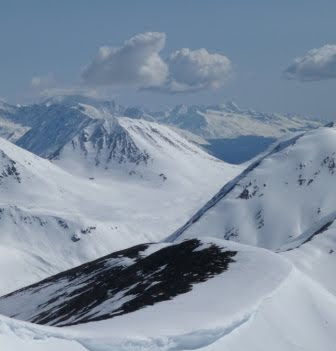 The top of Mills Creek, and Trail Lake area beyond that. 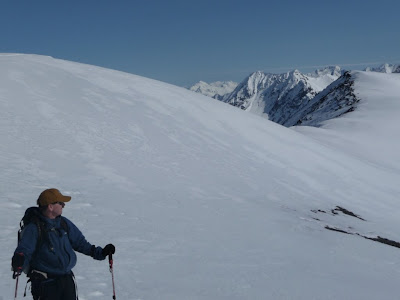 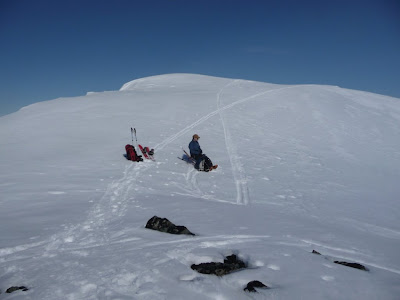 And taking lunch. (cte).
Neither of us was really feeling our x-factor, and after much debate, we decided to make a 1,500' mellow descent down the south side to Butcher Creek. 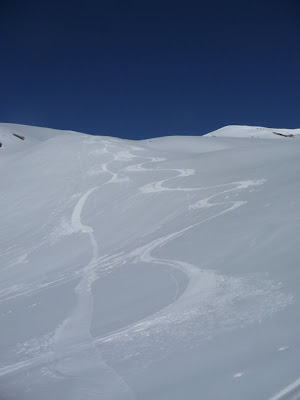 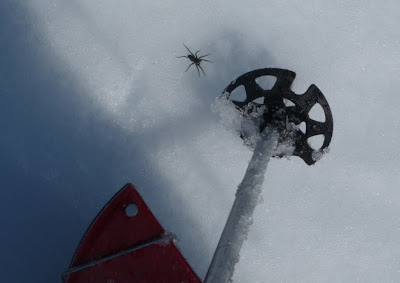 The wildlife is coming out in droves. Most exciting was the sighting of two bear dens on Sugar Ridge. Pete reported seeing them several days prior. The two bears appeared to have woken up and taken off immediately. The snow spiders meanwhile, were all over the place. This one was huge compared to the others we saw. Eat up those 'squiotoes pal. 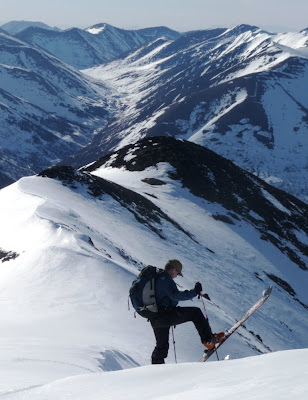 Back on top, we decided to make a northface descent, even if conditions weren't ideal. (cte). 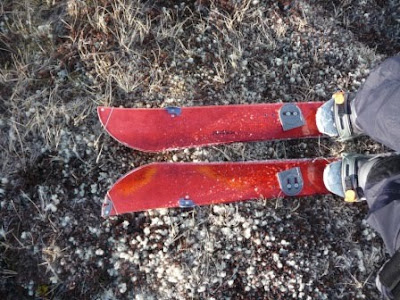 We followed a similar route to our climb back out. Here's a sight that actually hasn't been too uncommon this winter. I'm not sure this is what the makers of the split had in mind, but it works ok. 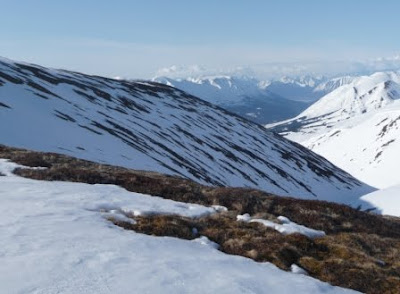 The backside of Raven's. 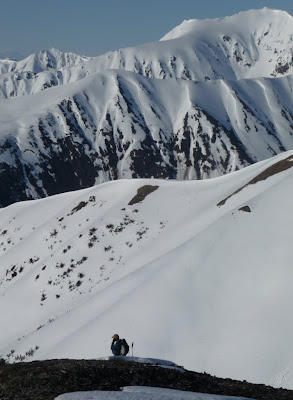 Checking in with home base before the exit run. (cte) 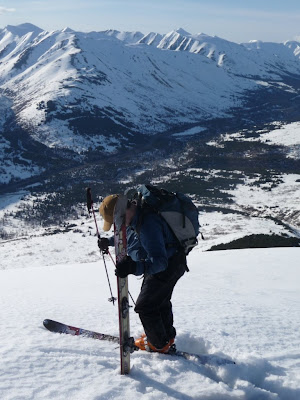 We dropped the westface express route from 3,500' for a 2,500' corn run that was butter soft up high but overripe and bottomless at the highway. 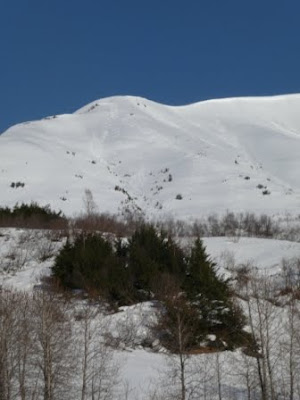 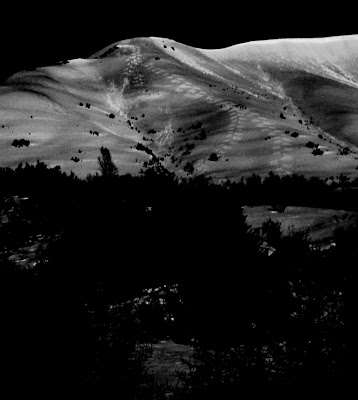 I would KILL to go snowboarding right now, reading your blog ruins my life. Today it is 97(F) in Tel Aviv with high humidity.

YOU HAVE NO IDEA HOW JEALOUS I AM OF YOU RIGHT NOW.

Well I can quanitify your jealousness to the degree that it is in all caps and bold, so I would say it's "quite jealous."
Just kidding. I'd melt if it made it to 67, let alone 97.