I worked in Valdez for the previous two weeks following the end of the Memorial Day Road Trip (see the previous post), and last Thursday, it was time to hit the road.﻿

Valdez is a cool town, I've been spending about two days a week there since late April. It's sort of like Kenai/Soldotna, except, without Kenai or Soldotna just down the road, and instead, huge mountains and tons of snow. Llike a lot of small towns, everyone knows everyone, and everyone is generally pretty friendly and easy to get along with. A lot like what I'm used to...
This particular two-week trip was nice since I had my bikes with so I could go ride after work. Let's just say, Valdez is no biker heaven. Not a big surprise there, a place that averages 20 feet of snow a winter gets a lot of liquid precipitation too. Roads are few (as in one) and trails are still deep under the snow. That being said, the sights are out of this world.

Durring my second week word came in that the big surge of Copper River reds headed to their natal streams had prompted Fish and Game to liberalize the dipnet fishery in Chitina and boost limits from 15 per head of household to 25, with the first opener scheduled for Thursday, the day I planned to leave Valdez.
Talk of "walking on water" was common, so I decided it would be worth my while to make the mere 60-mile round trip spur back to Chitina on my 300-mile trip home to try my luck.
A colleague in Valdez offered to let me borrow a net he had stashed at his cabin in Chitina and make use of an old back to haul my catch.
The generosity was much appreciated as net for the Copper won't work too well on the Kenai, and vice versa.

The dipnet fishery on the Copper (quick definition of dipnetting, it involves dipping a net of regulated size into a body of water to scoop out fish - courtesy of Capt. Obvious) is fairly undeveloped, especially when compared to the Russian River in Cooper Landing or developed sections of the Kenai.
Essentially, dipnetters drive to Chitina at the end of the Edgerton Highway, 30 miles from its spur off the Richardson Highway. The road splits left or right, a left heading onward to McCarthy, or right, which goes two miles to O'Brien Creek. There are some unmarked parking areas along this stretch, and then the road dumps down a steep hill to the beach where O'Brien flows into the silty Copper. A pedestrian/ATV bridge leads over O'Brien and heads high above the Copper as it churns through Woods Canyon. What is now basically a wooded ATV trail, was once the Copper River and Northwestern Railway, the means of transport for the lucrative Kennecott Mines (see the last post).
Along the trail are steep goat paths that lead down into the canyon to fishing spots. There are few markations to tell what's publicly accessible, and often it's impossible with the thick vegetation to know sometimes what one will find at the end of the goat trails.


I was given plentiful advice from friends in Valdez on where to go and how to stay safe. The Copper makes the Kenai look like a lazy stream, with its chocolate milk-colored waters and steep-walled sides in the canyon. Many of the fishing spots are actually just ledges, and the key tactic is to find an area where the canyon walls create a back eddy for the reds to hang out in. Smart dipnetters will rope up and wear a life vest. Not many people swim this river and live to tell about it...


I knew when I arrived in Chitina fishing was not walk on water. No one was too glum (after all, it was just the first day of the four-day opener) but most coolers looked clean.
I fished from shore for a while but most folks who were shore-based had called a quits by noon.
I was beginning to think I should do the same, but I saw folks in boats still able to catch a few fish here and there and that kept me motivated.
After a while, a guy came by the area who was in a boat alone. I had just watched a few dipnetters in a boat that looked like they knew what they were doing scoop three fish in a single pass a little out past the rock I was standing on. I told the lone dipnetter about this, and that he should try a little farther out.
"Wanna jump in?" He offered back.
Maybe I should have hesitated and given some thought to jumping into a stranger's boat several miles from anywhere, but that thought never occurred to me!

Jeff, from Fairbanks, said he'd been fishing the Copper for years and was shocked how slow it was. Apparently the big slug of fish was still somewhere downriver.
Regardless, we gave it our best for the next 3.5 hours and were able to get a total of three fish each. By dipnet standards, that's god damned slow.

On the flip side, the sun was out and the views were awesome.

Eventually we went back to shore and Jeff said he was going to take his fish back to his camp to ice them and take a nap. He offered to pick me back up in a bit if I was still around. We were both pretty beat.
I later deeply regretted not giving him some money for gas. I'm pretty sure that thought never occurred to him as he pulled out, and it sure didn't to me. I was a lot more concerned with destroying a sandwich, but when I realized it later I felt pretty bad. I have doubts Jeff will ever find this blog, but if he does, he should send me a line!

After a bit of recovery I started thinking about what to do next. The fishing was slow, no one was really catching anything from shore; if I headed back to the car and got on the road to Anchorage I could be home around midnight and still have the whole weekend to play. Leaving right then meant this would be a cool experience and an awesome start to a weekend. Sticking around was betting that the fish would show. It was guaranteed regardless, more people would show and the laid back atmosphere would probably get a little eroded.

On the ride back I talked with other dipnetters and learned I was one of the few who had any fish at all. The writing was on the wall for me.


Talk with folks back in Anchorage revealed that mountain biking was awesome in town and likely good down on the Peninsula. Had I not just been in the Chitina area two weeks ago I might have stuck around just because, but I'd been away from home for a while and my bike beckoned. I was Anchorage bound, and then Peninsula bound.


On Saturday, Mike C and I headed down the the Peninsula to ride Lower Russian Lakes Trail to the Upper Lake and back.
We ended up meeting up with an Anchorage crew, and though we mostly split up, we still grouped back up at some of the key stopping points along this section of trail. 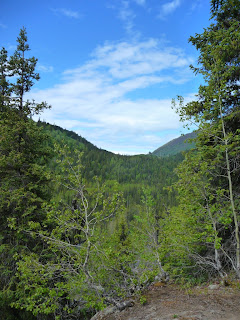 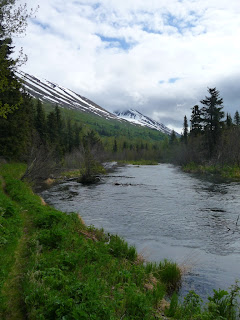 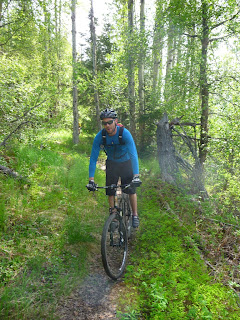 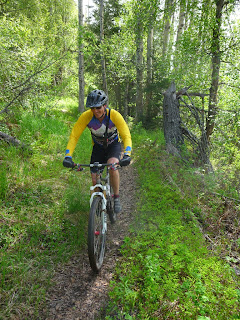 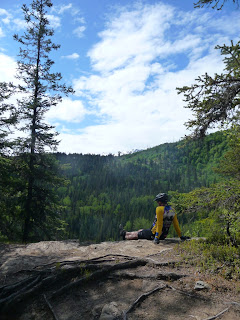