Sorry, this is a delayed post for a little adventure two weeks ago. Also fair warning, there's some dead animal in this post so if that's not your thing this post is not for you.

A few weeks ago I talked with Josh down in Kenai, and he invited me to come down and fly over to the west side of Cook Inlet for some bear hunting and king fishing. Friday couldn't come soon enough.
I headed down to Soldotna, making a stop off in camp to say hello and grill up some steaks. I met Josh at the Soldotna airport around 7:30 and we were airborne not long after.
Josh flys his Super Cub to the west side pretty much every chance he gets, and often hangs out at a cabin there. It doesn't take too long to understand why.
I havn't been to the west side since Spring 2010 when Justin and I went over very near to where Josh and Iwere this weekend and did some crust skiing on the Kustatan River and the big swamps that cover the area.
Although there is oil and gas infrastructure along the coast of the west side, the area is largely unihabitated and visited only by those with wings to get there.

The flight over the inlet is short, and with good weather it was smooth and scenic. Josh set us down on a narrow sand strip surrounded by trees near to the cabin he hangs out at. The second he killed the prop big horseflies began dive bombing the engine compartment and windshield of the plane. The grumble of the plane's engine was quickly replaced by the din of buzzing mosquitoes. Big swamps and lots of rain means lot of bugs. We unloaded our gear and Josh pulled out some big contructed wood boxes to fit over his plane's over-sized tundra tires. Bears have been known to chew on and flatten plane tires, as well as shred plane fabric and puncture fuel cans.
It doesn't take long to remember that very little stands in the way of stranding here, and between the bugs and the bears, one gets the impression quickly that there's not much on the west side that doesn't want to chew on you or your stuff.
We hung out at the cabin for a while, which site on a ridge in the middle of 1.000s of acres of swamp overlooking a shallow lake.
After a bit we hopped into the mud boat, a small jon boat with a mud motor for navagating the shallow reedy waters of the lake.

We headed a ways away from the cabin througha  series of narrow channels before reaching a beaver lodge a short distance from a ridge. The lodge was a perfect blind and rest to mount the rifle. 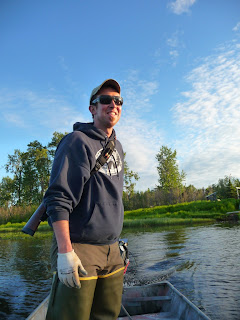 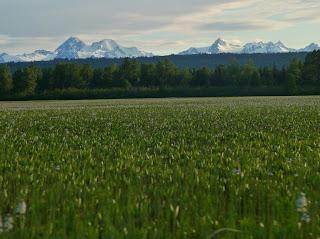 As the sun sarted to burn the top of the mountains behind us, we heard a rusting in the vegetation on the ridge, and shortly after a good sized black bear stuck his head into the opening. He stepped out into plain view opening a perfect broadside. I squeezed the trigger.
Stupidly, I had not been fully braced for the kick back of the 30.06, and was a bit disoriented.
The bear charged in a straightline in the direction he had been facing full-speed. Josh, who had a .357 for backup, as sometime the bears are known to instead run at the shooter, stood up and fired 2 rounds, though none made contact as the bear disapeared into some high grass 25 yards from where he had been when I pulled the trigger.
The bear had made no movement to indicate that it had been hit, and had apparently just run at full speed, frietened by the gunfire. Josh and I were convinced I'd missed, and as I thought about it, I determined that I did not have a good grip pon the stock, causing the gun to lift slightly when fired, likley causing the bullet to go over the bear's back.
We decided to give it 5 minutes just in case, and then go to the scene and look for any blood.
While we talked, the beavers living in the lodge were grunting up a storm and were not too pleased with our activities.

The bullet had passed straight through both lungs and heart. but missed his mass of shoulder muscle, so when hit, he showed no sign of impact. The bear had run as far as he could with no lungs and no heart. In some ways, its scary to think he could go that far at that pace, and is clear evidence that a direct shot won't neccesarily stop an attack.

The next morning we flew a short ways to the MacArthur River to fish for kings. A few others were taking advantage of the nice day and several planes were on the white sand strip along the popular fishing spot. We didn't see any kings rolling, lots of reds though, and could not entice any bites. 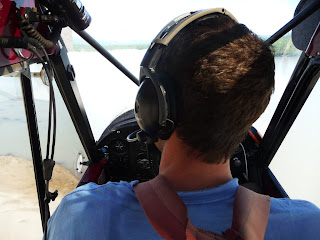