The launch of the Tour de France always seems to launch me into a cycling frenzy. Maybe it's the sight of lycra in mainstream media, or the frequent use of the word peloton, I don't know, but as if I wasn't fired up on riding it was, the Tour always gets me going even a bit more so, and for a few weeks I pretend like I care about professional cycling. By the race's end I'll be back out of the loop and on the down swing, but hey, I'll ride this wave, it's a good one.

It's not to say that riding has been anything less than great so far this year though. The trails in town have been in great shape. Down south, the Kenai has been slow to thaw and get logged out after a brutal winter. I hit the Russian hard starting in early June, first as an out and back (see http://atrailcalledlife.blogspot.com/2012/06/ambiguous-home.html), then the following week railing the Sharon S rendition of the Russian Loop (http://atrailcalledlife.blogspot.com/2011/06/russian-loop-sharon-s-rendition-june-25.html) solo in 4:15, anf finally again two weeks ago in 85-degree heat with Ethan, Brian, and Mike C.
By the last trip, vegetation was getting handle bar high in some places and in the bright sun, lots of people got burns from the poisonous cow parsnip that weekend. I missed out on that fun somehow.
I love Russian, and it makes me sad the Forest Service won't send a crew through there with a wheeler to crush down the obnoxious by weak-structured plant, or weed whack it, but so be it, the Forest Service has had their hands full this season trying to open trails that were covered in blow downs from the big winds of winter. Sections of trails were reported to have over 10 trees down per mile, which, when you do the math on trails that run in the 10's of miles, well, it's a lot of work.

Anyhow, this past weekend, finally tired of Russian, and with the other Kenai springtime classic Johnson Pass still blocked off with over 30 trees down in a 3 mile stretch in the middle, it was time to get creative.
Brian and Ethan wanted to do a short ride, but they really wanted to try and catch reds at the Russian River. Meanwhile, I wanted to do a big ride, and Adam was game. I could have just driven down alone and met with Adam, but it seemed silly for Brian, Ethan and I to all drive down in two cars when we were leaving from the same address.
We ultimately came up with a pretty cool ride. We started with the four of us at Crescent Lake TH. Neither Brian nor Ethan had done the 6.5-mile out-and-back since it's too short a ride to justify a day drive down too, but it was perfect since they had other plans. Crescent was in excellent shape, with one patch of snow in a usual slide zone and heaps of blooming wildflowers.
When we got back down to the TH, we split ways, with Ethan and Brian taking the car to Russian River to fish and Adam and I heading east on the Old Sterling Highway. This turned out to be the biggest surprise of the day, as though I was expecting flat, this old mostly one-lane trail was in fact very hilly. I wouldn't call it fun in a conventional sense, but it beat the heck out of riding the shoulder of the real Sterling Highway. At Tern Lake and the Seward-Sterling Highway Y, we decided to head north a bit and take Devils Pass to Resurrection Pass Trail back down to Cooper, where we could ride up to Russian River, find my car, and go drop Adam off.
I don't know why this ride option never clicked, but wow, it was great. There were lots of people out riding on Devils and Res even though it wasn't nearly as bright and sunny as the previous week. Devils Pass still had over a half dozen mostly large snow fields, but big snowfields are better then tiny one so they weren't as bothersome. Res Pass Trail from Devils Pass Cabin down to Juneau Lake was in excellent condition, and the wildflower show in the passes continued. Sadly, blueberry, alder, and cottonwood inch-worm defoliation is noticeable, especially higher up, and the fall may not be so brilliant yet again.
Every stream was at bankful, and Juneau Lake was up over the trail. The lower section was muddy and appeared to have been hit with more rain than farther up. That section is often a mess though.
We ended up with an elapsed time of nearly 8 hours. What a great day.

I've been forgetting my camera recently, or sometimes just choosing not to take it out, so the only pics are from 2 weeks ago with Ethan, Brian and Mike on Russian. 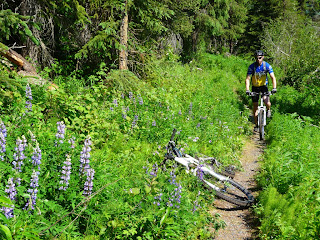