Earlier this winter Mi Ke sent me an email and asked if I would be interested in joining a ski trip to stay at the Don Sheldon Hut in the Ruth Amphitheater in the Alaska Range. For my non-AK readers, this tiny little private inholding in Denali National Park and Preserve is a hexagon shaped hut that sits on a steep rock outcrop in the middle of the glacier with sweeping views in all directions including of Denali.
I was weak on glacier travel, but Mike and the assembled group said that would be OK. This was a ski trip, not a climbing trip, and in truth, we all knew that the Alaska Range is a climber's mountain range, not a skier's so we would probably so as much touring around and sight-seeing as actual vertical skiing.
We were initially scheduled to fly in on Sunday April 7, but an approaching storm, and a cancellation from a group that had planned to stay in the hit only Saturday night, lead trip organizer Aaron to make the call to try and get in on Saturday.
It mean for some late-night packing an early morning on Saturday, but is was absolutely the right call. Had we not gone in Saturday, we would not have made it in until Monday, and we were scheduled to fly back out on Thursday. When we awoke Sunday morning it was puking in Anchorage, but as we drove north out of Wasilla it stopped, and Talkeetna was blue.
﻿
We flew in with Talkeetna Air Taxi, and we got to go in on one of their turbine Otters. The single-engine planes are the aviation equivalents of Suburbans, and can haul a lot of gear, people, and go to some rad places.

The hut sits may 100 feet above the glacier landing strip on a rocky outcrop that juts up through the glacier. It's about a 5 minute hike from the plane. The out-going group was waiting on the strip when we landed, and left a log in the wood stove and melted water.

The hut is insulated and heated with a wood stove. Most people bring in duraflame logs as they pack the most BTUs per pound compared to wood. It's easy to turn the little hut into a Swedish sweat sauna. 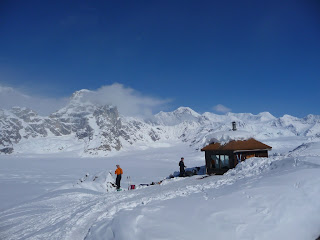 After a couple hours, having got settled in, we headed across the amphitheater to Tele Haven, what appeared to me as a small bump perhaps a half hour tour away.

Well, lesson 1: The AK Range is huge.
OK, I mean I knew this, and I tried to prepare myself, but when the boots and skins hit the ground, it finally became apparent.
The half-hour skin took about an hour and a half, and the "little" bump offered a pretty solid 900+ feet of vert, with more options up valley.
We roped up for the glacial traverse, but once we hit the base of Tele-Haven we dropped the ropes for the climb. 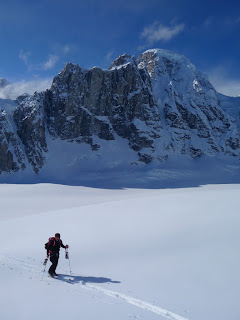 Grouped up on the sky line ridge, the ambient felt like it was in the low 20s and we started to get pumped.

The snow was about ankle-deep, dry, and fairly fast, on a carvable base. We went back for seconds before roping back up to head home.

On the trip back we learned lesson 2: this range can be cold. A week ago I was riding my road bike on the Anchorage hillside in afternoon temps that were tapping the mid-40s. As the sun dropped below the jagged horizon on our skin home, temps plummeted, and an inversion began to set in place. Temps were easily in the single digits and we realized we had stepped back to a climate more like what we see in January. 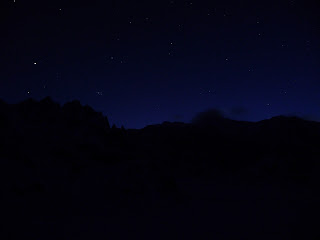 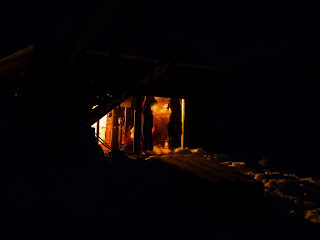 Day 2 we headed out for a tour to 747 Pass. This tour provided us with a great view of some amazing terrain. Clouds blew up the glacier in banks but the sun stayed out for the first half of the day. 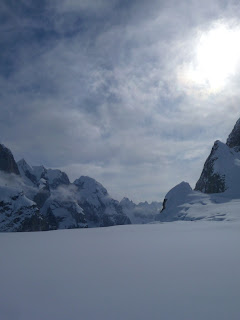 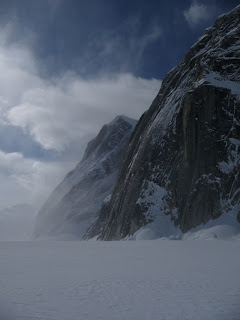 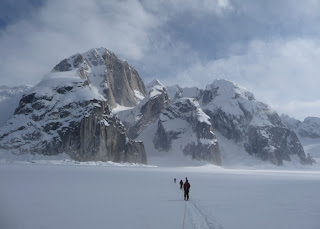 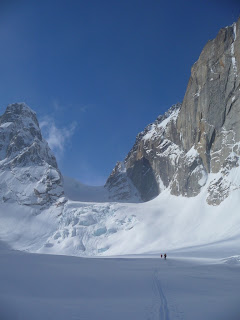 At the base of 747, Aaron and Tony climbed up the first ramp to make a run. It was getting late and we needed to turn around. As they went out of sight, another bank of clouds rolled in. This time though, it didn't blow out, it just started to blow.
They skied back down in the flat light.


We turned around and headed back out to the main glacier, with vis rapidly decreasing.
Mi Ke lead us four hours back home, carefully picking our hardly visible track out of the flat light. It was grueling, and the only 2 things we had going for us was that a. vis was still descent enough to catch glimpses of major land marks from time to time, and b. the blow was really just a delicate sneeze by AK Range standards. So, Lesson 3: this range is real, and even a little day tour can turn into a survival trek in the right conditions.
All lessons we already knew, but there's nothing like some ground truthing I suppose.
Mi Ke dropped one of the best quotes of the whole trip later that day.
Hours later, back at the hut, having lead us for hours despite half-hearted offers from others to take over or flip on the GPS, and visibly fatigued and a bit stressed, Mike walked into the hut, and in one fell swoop of his left arm and perhaps two long strides, grabbed a beer from under a bench, popped the top, plopped down on a bench and pounded half of it in a couple gulps, and then, looking at no one in particular but still making it clear he wanted it to be heard, said,
"I gotta take a sh!t."
We died, the tension was lifted.


Day 3 Aaron had his sights set on a couloir 20 minutes from the hut. We could see it had a shrund, and crevasses around the apron, but we decided to investigate.
The crevasses were big enough to pose serious consequence if things went wrong, but over all, the run looked good and the shrund was filled in. We brought wands and staked out the fan so if we had to make the drop in flat light (we were learning...) we could still charge through the apron and avoiding slough while funneling back through our probed exit.

Karson's feet were torn up so he opted to watch us from the hut and take a rest day while Tony, Mike, Aaron and I set off. Just above the shrund the snow went from nice to breakable, and Mike and Tony split off and dropped back down to watch us from below.
Aaron and I made it about 2/3 the way up, and wouldn't ya know it, high clouds rolled in. We made it to a point where the couloir was getting both wider and steeper, and the snow ever harder, so we called it good.

While we were climbing two planes came in. No planes had come in the day before, and we had seen no one else since Saturday. The planes dropped off Andrew McLean, Noah Howell, photographer Garrett and Andrew's long-time ski partner Mark.
They stopped up at the hut later to have a brew and trade intel.

The storm continued through the night and into the next morning, so we laid low until early afternoon.
﻿﻿﻿
Then around 1 it began to open up, so we headed behind the hut for a few low-angle laps﻿﻿﻿. The skies opened up even more, and soon, Tony, Aaron and I were headed toward what I think is called Michio Point and a cool looking bowl.


The bowl held excellent snow, and we did a warm lap. At the bottom, the McLean crew rolled in. It was a real treat to get to share a slope with these guys. 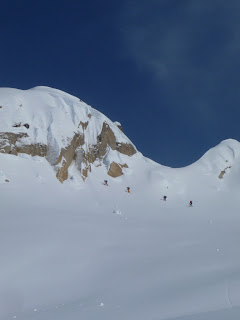 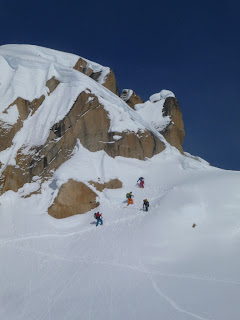 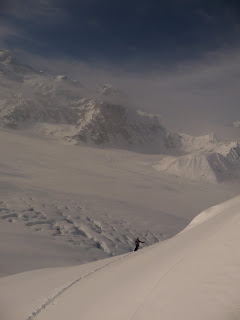 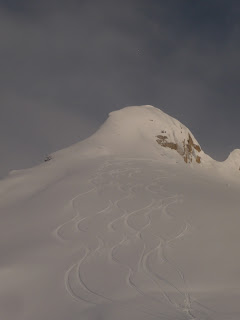 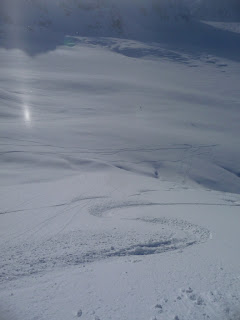 Andrew skis a line along the Barrille ice fall. 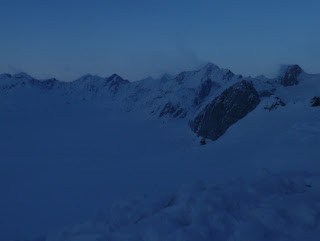 Amped up after such a great afternoon and with the skies clear, we were ready for a big last day over at Tele-Haven
Alas, it was not in the cards. The winds picked up over night, and we awoke socked in. All day it blew and snowed, until finally clearing mid-afternoon. Aaron joined with the McLean crew and headed across the way for a lap, but found marginal conditions there.

We were in for a treat though. 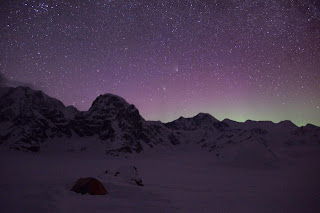 I joined Mi Ke and Tony, who chose to fore go the hut through the trip and slept in a tent and snow cave, respectively, each night. I set up my biv, and even though it was easily 20 below, passed out. Around 2, Aaron was awoken by light flooding the hut, and came out to take the above photos. His oohs and ahhs woke me, and when I peered from my cocoon I was blown away by the most beautiful aurora display I have seen since I moved here.

The next morning we awoke to crystal clear skies, it was the day we were hoping for, but we had to pack up and head out.
The plane came in on time, and we enjoyed a great ride out, with a bonus pit stop at the Root Canal to drop off some climbers. 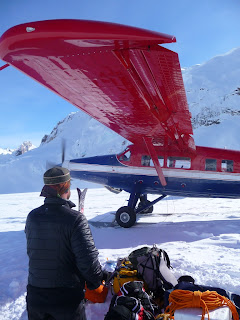 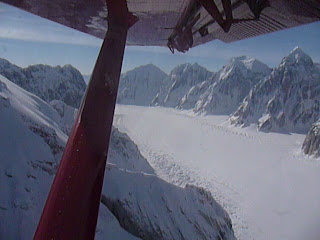 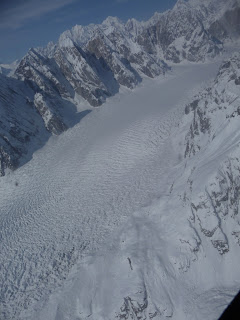 Taking off from Root Canal.
Getting a closer look.

Nice pix - the Ruth is a majestic place.
The rock formation W of the Mooses Tooth is called the Gargoyle. Broken Tooth lies about a mile E of Bear Tooth.

Thanks Billy. And thanks for the pointer on the name of the Gendarme. I like your name a heck of a lot better. Very fitting, especially when the sun hits it just right!