Sunny Days in a Fun Daze

The last 2 weekends have been a dream of blue skies, calm winds, and creamy snow. Conditions in Hatcher are primo. The snow pack is thick and stable. Better yet, much to the dismay of winter weary Alaskans, temps have been below average, preserving the powder goodness.

It seems my endeavors have been focused on a few shaded drainages in the Hatcher area, so if all the pictures here have a similar look, forgive me, but I tried to choose different angles from different days.


Looking across the street from Stair Step, the Government Peak area beckoned. On Tuesday, Aaron and I cut out of work early to go investigate.

I planned to climb Frostbite and wrap around to the summit of Government, but as we got our first view of the backside of Frostbite, well, plans changed.

Like flies drawn to the light, we passed by a bunch of ripe lines and went to a corner pocket with a 10-foot cornice that demanded a 15-foot mandatory entry. It was intense, so we pulled out some rope and tried to cut the cornice down a bit.
An hour and a half of wasted time later, we gave up. The good news was, that cornice wasn't going anywhere, depite several deep cuts.

The thought of the corner pocket line and all the good lines we passed by lurked in my mind while I tried to focus on work the rest of the week, and by the time Friday rolled around, I was ready to go back. Aaron had to work a half day, but this still allowed plenty of time to get done what I had in mind.
I was focused this time: right back up Frostbite, I had my eye on a techy little line right off the top that someone else had already layed a single set of tracks in.
Then head up valley and climb Government.
Drop it.
Climb back up the backside of Fostbite and ski down one of the north chutes.
Cruise back out.
All in enough time to get Aaron home for dinner. 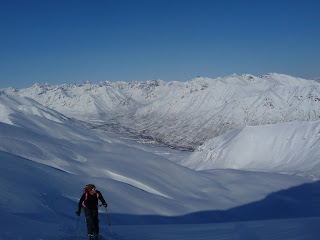 Saturday, a small crew headed to Stair Stepper with the plan to head into Delia Creek.
Sadly, while I was skinning up the ridge between Delia and Stair Stepper, my right binding broke. After an initial onslaught of f-bombs, Nathan pulled out a ski strap, we braced the broken piece, and I spent the rest of the afternoon working on my tan...and yelling at everyone else to ski harder!


Because of the way the bindings mount in ride mode, I was able to board out pretty easily. 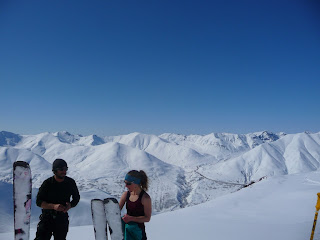 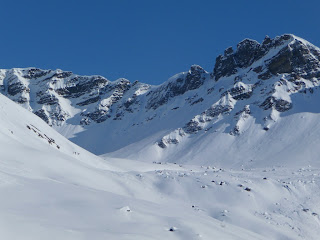 Sunday, with a spare set of Voiles mounted, I think we had some big aspirations, but ended up lapping what was left of the untracked terrain in Stair Stepper and chasing butterflies around with no clothes on, proving there is no such thing as too much of a good thing...I think the sun must have got to us.