Mr. Weend is a douche.
Mr Weend is the worst ski partner in the world.
Mr Weend will harrass you all week, slip onto your trip, bring his fat and lazy dog (Mr. Woompf) who makes a racket the whole way in while you break trail, and two seconds before you think you're going to get away from their relentlessness, will swoop in without a word and take firsties, leaving behind big haphazard gaper turns, transforming what's left of the run into an obstacle course reminiscent of "The Super Aggro Crag" from the hit 90s Nickelodeon game show "GUTS."


Nathan, Dan H and I had a secret plan to ditch Mr. Weend though...

The wind had been blowing relentlessly for the past week, but seemed to have been weaker in Hatcher than to the south. We had scoped out a few couloirs in the Delia Creek headwaters that were tucked away in a sheltered bowl. More, the runs themselves were pretty well sheltered by high granite walls.

The approach did not bode well. Where a week ago we were skiing creamy powder all the way down through this drainage to nearly the car; Saturday we were cruising effortlessly on a highly supportable sun/heat crust down low, and dense wind crust up high. The heat and the wind were gone, but their wreckage was evident everywhere.


As we wandered through the mushroom garden, we began to seriously consider enhancing one of the snow-covered erratics. It was beginning to look desperate.
After a quick snack in the sun at the base of the apron, we charged upward. A few hundred feet up it was time to start booting.
Nathan lead the way. 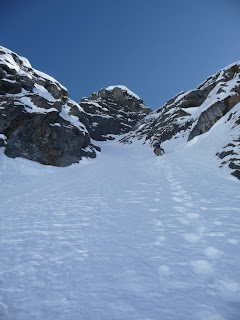 As hoped, conditions steadily improved as we entered the chasm. They weren't great, but they were OK for the most part. Rocks, lichen, and grass that had been blow free from the ridges above covered the surface of the snow. Free stone grind.
About mid-way up, as the couloir cut climber's right, the snow went back to dense. Nathan found a large rock buried under the snow and parked to let us catch up to this point of relative safety.
After deciding to press upward, I went to take over the lead. I stepped forward, and felt my foot plunge down into dead air. Pulling back I looked some 5 feet down: uphill was solid granite, downhill was solid snow...pack.
Shit. Panic. Not good.
I reached forward and found 6 inches or so of snow sitting on a smooth bedrock surface.
Rock?
No this was a buried cliff band.
F-bombs.
We debated pushing onward yet again and the risk of pushing onto an isolated slope.
Yep, keep going.
Moving a little ways to the left, I delicately got a foot hold on the lip and stepped over the unseen gap.
Nathan took back over; but as snow quality continued to vary, Dan decided to back off and kick steps back down to the cliff band and ski to a safe spot.
Good call.
A missed turn on the variable snow through the snaking couloir guaranteed an impact with a hard surtface.
﻿
Nathan and I reached a spine and climbed onto it, happy to get out of the gun barrel. Above us was the choke start.
About 8-10 feet wide and around 50 degrees, interjected with a line of exposed tundra, the choke was also the crux. Nathan attacked it from two different angles, but the protruding tundra, slabby conditions, and relatively minimal reward just did not add up. We called it good from the spine.
Nathan started a bit higher than me off the spine, dropping a turn into the gut and then pulling high back onto the spine's fin just below me.
Holding still, caught in suspended animation for a brief second, I watched him study the crumbly slough he had set off in his turn hiss and evaporate down the gully.
Whoosh.
He dropped the line, high siding the the opposite wall on the other edge of the couloir as he banked the first corner. Rocks flew off the tail of his deck and into the granite walls. I could hear them rolling after him as he shot out of site.
Inspiring riding in uninspiring snow.
Seconds later he emerged far below in the sun.
Fine, my turn.
The mojo wasn't there for me. I ussually feel a great sense of calm in these situations, but not today.
I dropped a similar entry, but when I pulled back up onto the spine fin, I just parked, and watched for a while as the the chunky debris tumbled down.
Nathan had torn the couloir a new one.
I didn't trust myself to do the same in these punchy conditions.
I cut another turn, a gaper delight. Around the corner and into relative shelter, I feel confident enough to make three hard carves in a row.
"OK, fast enough," I think, "Time to make another hard cut to the right, back across the couloir and stay away from that rock band coming up."
I look right, and see a cloud of slough about waist high. Chunks of crud the size of footballs are flying every which way out of it.
"Run," goes through my head, and I lean back on my tail and cut the wiggle butt crap.
That was the motivation I needed I guess.
By the time I'm burning down the apron I shoot a glance back, and see that my so-called slough has self destructed.
Right. Wimp.

A good adventure, but the run, nor its neighbors, were worthy of further investigation. We headed out, and even at 430 in the afternoon, the crust is still so cold it has hardly softened.

Sunday, solo, I decided a late afternoon trip to Sunburst in search of soft snow was the ticket. I swtiched routines, did the Sunday night stuff (make sure I have clean clothes to wear to the work place for the next 5 days, debate and then neglect furthur apartment cleaning), and headed south sometime after lunch, planning to ski late.

A bit warmer in Turnagain, the temps were still pretty chilly, and the first south-facing run at 330 was sported conditions worthy of ear plugs.


The next run started to shape up though.

My dinner time, temps seemed to have warmed enough to hold out hope for improved conditions on the hougher south-facing terrain, so why not go a bit higher was the ligic. Everyone had long since gone home, but the corn seemed to be at its best all day.
On the ridge, what's this?
Powder.
Somehow, a small elevation band had been spared on the north face from the heat and the wind.

The discovery was late, and being alone, I was tentative about playing in the rocks bands where obvious natural point releases had gone off, so I kept it to a rib run. Eventually the powder turned into a carvable slab, and away I went, back to the land of corn, which, by 630, was perfect.

Ha! Dan made it sound much more dismal.

The tracks on Pastoral were from Friday and Saturday. Watched guys ski the NW face on Friday and it looked great which was what suckered us into a horrid N aspect on Sunburst.

Maybe the new snow will soften things up again. Would hate to have to start ice climbing again.

Deutsch is the German language word for German (adjective). Are you sure you don't mean douche