When Memorial Day weekend rolls around and the weather forecast is for sun, Anch'o'Rage takes to the Seward Highway and storms the beaches.
That's all well and good. I like the Kenai, but I think the secret to the opening weekend of summer is to avoid one more weekend sitting behind the Winnebago caravan on the Seward, and head north.
Last year we were rewarded with thin crowds and non-existent traffic on a road trip to Wrangell-St. Elias National Park (LINK).
This year, Mike C and I headed to Denali National Park to do some gravel road grinding (not to be confused with a web site, grinder dot com; gravel road grinding involves long rides on lonely gravel roads).
Confession: Except for the Alaska Range trip this spring, I have never been to Denali NP.
Confession: I've driven the haul road, driven from the Lower 48 to Alaska, twice, driven to Valdez, but I have never been north of Talkeetna.
Honestly though, going to Denali is pretty unattractive given all the things to do here in the summer, and it's closed and only accessible by plane, ski, or dog team the other half of the year.
Most of the time when its open, it's packed with tourists and out of state workers, pushing and shoving to take a picture of a bear, or asking, "If that mountain is Denali, which one is McKinley?" (That assumes they can even see the park's namesake mountain, which sports at least two names).
But this time of year, the crowds aren't a problem, and as we learned, it was the perfect place to be.
We left town late Friday afternoon and drove about three and a half hours north to Healy, just north of the entrance to the Park, arriving late at a non-descript campground that featured hosts who spoke limited English, no functioning rest room facilities to speak up, and a melt water stream and lake flowing through the "tent" sites. However, said campground is an incredibly close stumble to 49th State Brewing Company; and all those other things are irrelevant anyway.
Denali National park has one, 92 mile road, that enters from the Parks Highway. The first 15 miles of the road are open to all traffic. Beyond that, only a few permitted private vehicles are allowed another 15 miles, and bus, bike, or hike is the only way to go further in.
We parked at the small parking area at Savage River and began our ride from there, with the plan to ride about 30 miles in, up and over Sable Pass. 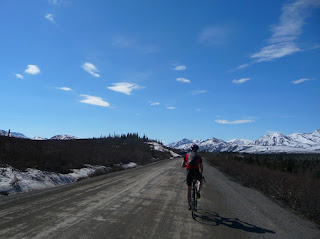 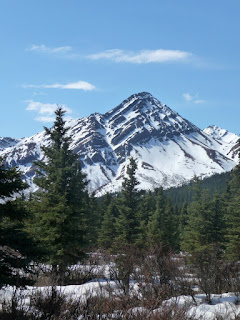 We noticed Friday evening on the drive up, the interior still had a lot of snow. It was hard not to wish for a the splitty and more time.

Road crews begin clearing the Park Road in March. An entire section the Park's web page is dedicated to photos of the effort, which includes breaking up solid ice from overflow that can be 6-feet or more thick at times. With the road open, crews appeared to be trying to manage the excessive flow of melt water as the warm sun kicked in.

The thick snow cover on the ground meant no bugs, and lots of reflected sun. Temps were in the high-50s to low-60s all day. Perfect riding weather. The road was in great shape too. No mud, and dust was rarely a problem. Bus drivers typically slow way down when approaching riders. 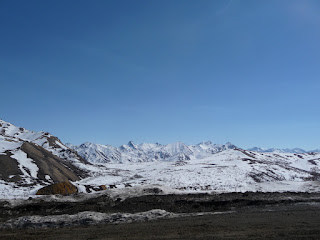 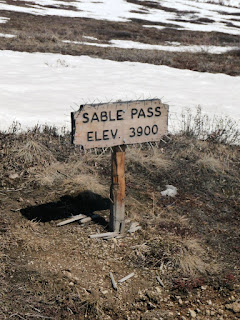 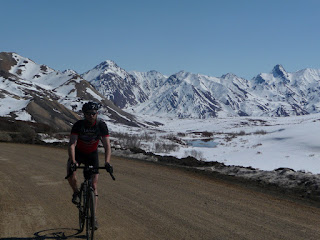 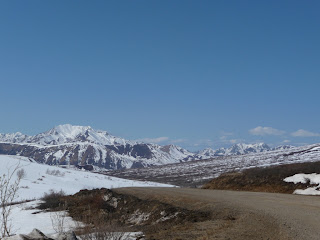 We debated pushing on, but knew that we were beginning to eat into our own abilities to do a good ride the next day.

While the snow-covered peaks offered some familiarity, overall, many of the vistas hardly felt like the Alaska I think I know. 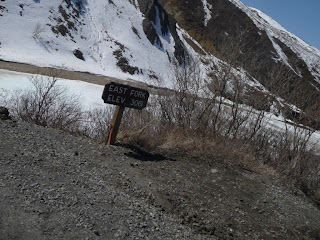 Short of any dry singletrack, this was my first real outing on my new Scott Scale 910. While a geared cross bike is perhaps the most ideal bike for this kind of riding, the Scale was sufficient and did not feel too inefficient, plus it added a lot more confidence on the washboard sections and pot holes.

We headed back to camp and refueled and re-hydrated at 49th State Brewing, which is an excellent hang out. The food is adequately portioned and priced, and the libations are, well, they're a topic for another forum.
Sunday dawned clear and sunny yet again. After a leisurely start, we packed up from the shores of what we referred to as lake sh!ticaca at the campground, and headed south to the western terminus of the Denali Highway.
Before the Parks Road connected Anchorage and Fairbanks directly, the only way to link the two up was to head east on the Glenn, and then north on the Richardson. This meant access to the park was significantly longer, via the Denali Highway. Nowadays, the D-Highway is a seasonally maintained, 135-mile gravel road linking Paxson, on the Richardson, and Cantwell on the Parks.
From Cantwell, we drove about 30 miles east on the D-Highway to the still snowed in Brushkana Camground. Though we can't say we knew any better, we saved ourselves a lot of pain and suffering, as those first 30 miles out of Cantwell are pretty hilly.
﻿

Temps were cooler on Sunday, struggling to make it out of the 50s. 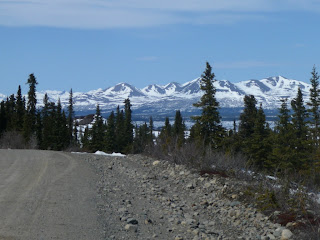 Views into a much lonelier portion of the Alaska Range. 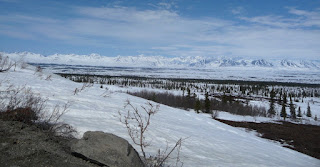 Traffic was still very light and we encountered little mud or dust. 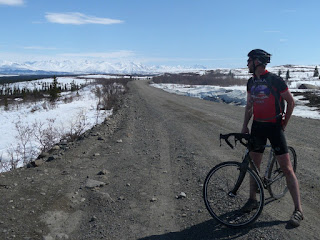 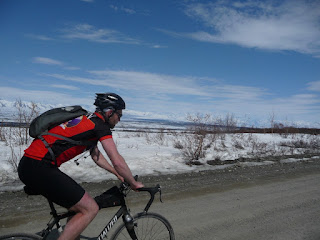 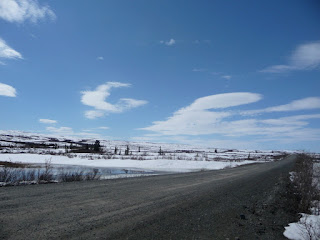 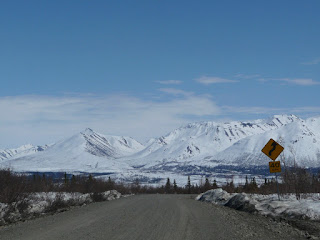 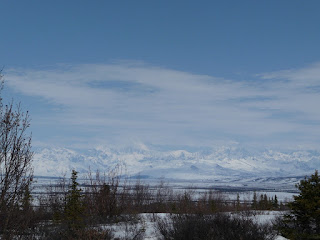 We rode about half as much as we did on the Parks, as the legs were a bit spent from the day before. It would still be pretty sweet to ride the D-Highway in its entirety though, and is fodder for another long weekend.

We saw a ton of birds and plenty of Arctic ground squirrels, one very distant bear, but other than that, no wildlife to write home about.
Then, on the drive back down the Parks, we of course came across a small group of caribou, and joined the throngs to gawk and Instagram. 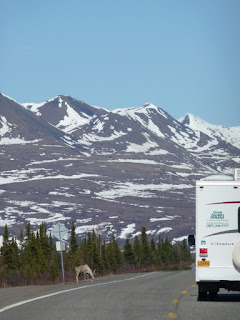 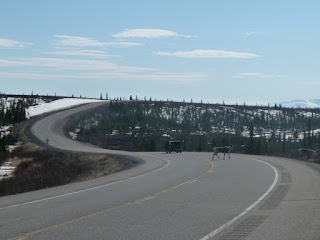 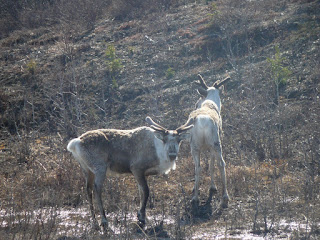 That riding looks to be a *little" better than Hatcher. We'll have to make a trip up the next time I visit!

That riding looks to be a *little* better than in Hatcher. We'll have to make a trip up next time I visit!