Spring has (and still sort of is) taking its sweet time, but I finally headed south last weekend for some activities that are generally more common for this time of year.

On the way down on Friday I stopped at the Johnson Pass northern trail head and hopped on the road bike for a 50-something mile ride to the town of Hope (Porcupine Campground at the end of the road actually) and back.
A paved bike path follows the Seward Highway from the Johnson Pass TH to the Hope Junction, and the twisty Hope Road has very light traffic and good pavement, making this an all around satisfying road ride.
The only down sides were the amounts of gravel covering the bike path in most sections and the fact that the first 45 minutes or so are spent riding down, meaning this ride ends with a climb, and on Friday, a stiff headwind too.

I crashed at fish camp both Friday and Saturday. Joe was working furiously to deal with an endless to-do list, which is a bit on the long side this year thanks to the fall floods and deep frost. He was looking forward to a return of both the crew and some fish.

On Saturday morning I met up with Adam and we headed to the Resurrection Pass south trail head to launch a ride on the lower portion of the Russian Lakes Trail. The cold spring has left sections of trails that usually aren't muddy still covered in freeze-thaw mud, especially north-facing hills. We had to hike a few sections, but overall, the riding was better than we expected. We made it as planned to the Upper Lake, taking a break at the cabin, before turning back around. There were a few trees down in the usual areas, but we were actually able to move several ourselves (I will be writing the IRS for my tax credit after I post this). 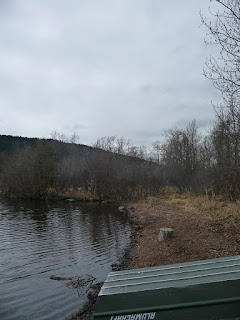 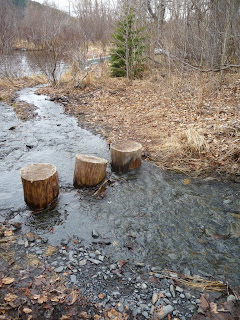 Sunday was a work day at camp, helping Joe out on some projects.
Posted by Dante at 9:49 PM