Russian Lakes Trail and Johnson Pass Trail, the Kenai Spring classics, are in peak form: dry, hardly encumbered by vegetation, and pretty as all get out.


Adam and I hit Johnson Pass as a 46-mile out-and-back, starting from Moose Pass on Saturday. Lots of other people were on the trail as well. Bikers easily outnumbered hikers by an incredible margin, and I probably saw more bikers than I have ever seen out in a day on any of the Kenai epics, including Res.


The enthusiasm is awesome to see.


I made it to the Johnson TH a bit on the early side, and sat tight to witness a conglomerate crew that consisted of portions of the Wasilla-Fishhook Gang, the Wednesday Night Bangers Ride, and the Trail Tramps, intermingled in one group, headed north, up the trail from Moose Pass.


The jabs flew like a pack of cats and dogs, penned up in an alley; the bar was set, Adam and I would have to catch the hodge-podge posse or we would be ridiculed (even more).


But Adam and I didn’t hit the trail until nearly a half hour later, and I knew the flack was growing every mile they progressed. I figured, as long as we caught them before they hit the high point, we would save (some) face.


We took off, and and pace kicked up to a level where conversation was sustainable on all but the steepest of climbs.


The south end of Johnson is a classic XC ride, with lots of up-and-down to keep the heart rate pumping for the climbs, and adrenaline flowing for the descents.


The uninterrupted climb to tree line was punctuated by one, sizable, downed pile of trees, but was otherwise good to go, though a sweat fest for sure.


Above tree line, a mild north wind whisked away the accumulated sweat from our brows, and we powered onward, before finally catching up with the crew a bit south of Johnson Lake. 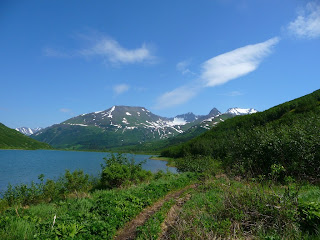 Herbaceous veg was stupendously low, ranging from pedal to maybe top tube high, and the trail was for the most part firm and dry, with only the occasional wet spot. Woody veg is getting a bit out of control and abrasive though. Rumor is, the Feds will be in here to take care of this this year though. The Pass itself is in desperate need of some hungry moose, or some pruning. The south end of the trail, which saw brush cutting only 3 years ago, has grown back surprisingly fast as well.


We picked up Braun from the crew, who was also planning to ride through and back, and carried on at a slightly more moderate pace, now that the heckling session was over mitigated.


One only needs to ride a few feet past the marker at the Pass before you realize that the north and south ends of Johnson Pass are two totally different animals. 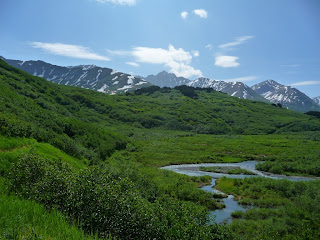 Though our general elevation track was downward trending, the average pace failed to tick up very much as we negotiated piles of boulders that promised to sheer off derailleurs or split sidewalls if the wrong line was chosen.


On a notoriously washed out, rocky hill that reminds me of some of the logging roads I grew up riding, Adam took a nasty header over a log water bar.


I missed seeing the impact, but at the base of the hill, he told me he hurt his wrist on the fall.


I could see he was a little shaken from the spill, in the usual sense one is, and had a bit of a wild-eyed look.


Taking stock of the condition of his hands, Adam realized that his other hand (not the sore wrist), while maybe not catching the brunt of the fall, had found a sharp rock, and had a nice split on the palm that was readily relieving itself of blood.


The wrist was OK to ride on, but sore.


Adam declined pain meds or a chance to let me play trail doctor with my $10 med kit; I can’t imagine why.


We carried on to the north trail head without further incident. 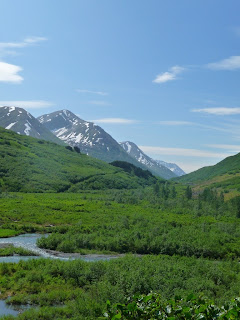 Two large snow fields covered the trail near Turngagin Pass. No surprise there, and I was surprised, as I always am, by how long it takes to descend that north section.


The upshot of that, is that while I always think the return climb will take forever, such is not the case.


We took a break at the trail head lot, though Braun, who had slipped behind on the descent, whipped it around in a hurry, eager to set a new PR.


Kellie, Phil, Natalie and a friend rolled in just as were about to hit the trail, and I offered to let them use my car at the opposite end so they could do a point to point as a group, so long as we met up later in Moose Pass.


Adam and I headed back south, sweating a bit more with the wind at our backs, but relieved that high clouds had moved in to keep temps cool.


I guess we weren’t sweating as much as some of the bike packers, who were wheeling their heavy loads up the trail. We were impressed however, when a denim-clad, pony-tailed backpacker/angler we had seen smoking a cig like Joe Cool of the Kenai Backcountry, was walking briskly down the trail a good 5 miles from where we had last seen him. The menthols certainly weren’t holding him back.


The descent down the south side was a tear as always. I noticed in at least one corner a”signature” that I knew was left by Cody, and left at least one of my own when the duff went soft.


As we entered the hilly section approaching Trail Lake, I felt our pace winding down.


I was not liking this, and my legs were feeling refreshed.


With maybe 2 miles to go, I hammered into the base of short, a steep climb.


I felt bad that I didn’t forewarn Adam, but I also wasn’t sure my legs were going to still want to go at the top of the climb.


“We’re good,” they reported as we crested into a short descent.


I really liked how we had ended the last 5 miles of Russian a week before with a blitz chase, even though on that ride, my legs didn’t have the juice to sustain the effort, so I went for it, knowing Adam was going to not only catch on, but probably try and catch up.


Somehow I fended him off, though I mostly credit my sly sleazy maneuver, the rocky climbs in the last half mile to the car that favor my bike, and probably mercy from Adam.


I rejoined the big crew at Sharon’s cabin, and we rolled to the Moose Pass Solstice Party. The food, beverages, music and peeps all received high marks, and I even got my car back.


I did not eat enough though, and Saturday’s effort pushed me more than I realized. I dreamt at one point that night, of eating pine chips. They were delicious.


Sunday’s ride broke some records on a different front. Fourteen (yes, 14) riders gathered in the Res Pass Cooper Landing lot for a shuttled, point-to-point ride “down” the Russian Lakes Trail.


This was easily the most people I have ever done a group mountain bike ride with that was actually cohesive.


In general, group mountain bike rides are a bad idea. I’ve seen mountain bike spins with only four dudes go straight down the tubes when all four managed some kind of mechanical in a mosquito-infested backwater of a trail.


This ride certainly had its share of mechanicals, but the fact that 13 of the 14 riders made it to the end, and all riders made it out, intact, with no one having to take a hike or having a meltdown, was maybe a miracle?


Or maybe it was just that the group consisted of competent backcountry travelers, who, though they may not have all possessed the same fitness on a bike, were all perfectly capable of taking care of themselves and each other.


We didn’t actually know we would have 14 riders from the outset, so the start of the ride consisted of some standing around in the Res Pass Lot doing some car to bike accounting. We made the choice to be incredibly un-American, and stuffed two pickups with 14 bikes and humans.


We all enjoyed a snug drive up Snug Harbor Rd, albeit, a bit dusty, unloaded, and after agreeing that the entire group would string out, but regroup at Upper Russian Lake – apx halfway – set off.


I did not want to be anywhere near the front of this group, out of fear that agro-Dante would come out and decide it was actually a race, not a group ride.


So I went for a little pedal by myself down Snug Harbor Road and let about a 5-minute gap build before I too headed down the trail.


Unfortuantely, it was not long before I found Mike K and Jessie tending to a leaking front tire on Jessie’s bike. We shot some air into the tubeless tire and carried on, but maybe a half-mile later it was squishy again. The tubeless tire appeared to have a leak at some unknown location, and required a total of five (5) hands and three (3) tire levers to pry the tire off and re-seat it, tube in place. The sixth (6th) hand was used to swat the hungry mosquitoes from our three (3) backs.


The time spent working on the tire left a big gap between us and the rest of the crew, but spared us from a few other flats and a broken chain repair session.


The one casualty of the day was a blown sidewall on a rider whose name I’m not recalling, but the incident occurred within 5 miles of the Upper TH, so, after patching the hole as best as possible, he took one for the team and rode back up and out, driving one of the trucks back down.


Mike, Jessie and I didn’t see anyone else from the group until we neared the Upper Lake, and took a long lunch on the windy shores. 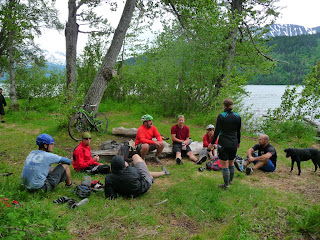 The ride out through the next 10 miles was perfect. The lupine was in bloom, and I slowly worked my way through the group, and Mike and I took off to finish up the last few miles well ahead of everyone so we could go retrieve his truck and still hang out after.
Posted by Dante at 11:54 AM