Winter and Spring are fighting...and we are the children caught between. Sometimes life is tough and confusing, sometimes we get double birthdays.

Anchorage awoke to the first Saturday of May with snow falling all the way down to sea level, and accumulating somewhere around the 500 FSL mark on up. I imagine more than a few people added more than cream or sugar to their coffee at the sight.
A rally north lead me to Lizzy's at the base of Hatcher, and not long after we were into the storm to investigate.
We found a white out, and even starting out low at the Government lot, we were accosted by furious flakes.
We realized quickly that we would not be going very high, but the alder land would at least let us approach the base of some of the surrounding peaks.

Snow that had fallen cold upon Hatcher mid-week was now being condensed under the 20 some-odd inches of heavy and wet that would eventually accumulate, making for a very talkative snow pack indeed.
While we stayed well away from the unseen slopes of Frostbite and 4068, we heard frequent rumblings from across the street. One notable slide ran for two minutes, and sounded like a cascade of wet, card borad refrigerator boxes tumbling down a hill.


We skied the whale snot down low for a couple runs, and hoped we would get a break the next day.

Sunday dawned clear, and we headed back to Frostbite and 4068 area to see how the new snow had settled.
Slides had gone on almost every aspect, though their nature varied. On southerly sun-impacted faces the fresh snow went wide and went far. On northerly faces the slides seemed to struggle to rally support. It didn't matter though, the snow was deep, and heavy. Even a narrow, 20' x 100' slide down a gully piled up enough rubble to bury a car, and with the accumulated water weight, probably crush it too. While the sun shown overhead, clear skies had failed to materialize overnight and suck the fresh snow dry of its water, so we found a rather wet and warm snow pack.
A whoompf not too far above treeline in the flats got our attention. A 5-minute pit suggested the new snow still wasn't getting along with the older drier snow, and just below the old snow was a firm melt/wind crust.
We kept our angle moderate on the shoulder of Frostbite. 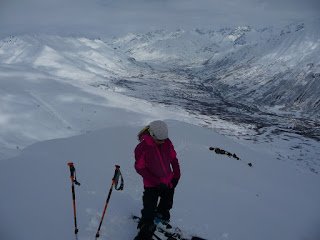 Lap 2 and the clouds returned. The light went flatish, the snow was so-so, so we called it a day.

But being the children in these seasonal feuds can be sweet too. By Wednesday, spring was sprunging, and temps climbed into the mid to high 50s across the LA bowl. Out of the office mee-lee and into the nearby wilds.

Lap 1 yielded great corn in a long west-facing gully. Lap 2, and the snow started to get a bit of an attachment complex.
Then, I ran into Rachel.
"I could do another or go home," she said, having just skied a more northerly aspect.
I was having the same debate, but her tracks on the shoulder looked sweet, and called for more.
"Always another," I replied.
"Damn you."
But the light was perfect, and the ambient had set the shoulder up for great turns in inch-deep corn.
The 9'o'clock something exit promised to be horrid, but I forget, the beauty of the FR is that the wind hammers the snow all year, so when the sun and warmth finally arrive, the snow just softens, and rarely collapses. Going home was a breeze.
﻿