Every spring I develop this perverted fantasy.

Good snow gets harder and harder to find. Climb high, stay north, watch the sun, and watch the ambient.
Every outing could be the last. Shut-outs and no-gos become as prevalent as bomber days.
Where are the glory days? Where did February and March go?
There was sun in those months too, but not too much. Skiing was care-free. All aspects were a go, right down to the car.
What is this shit?
I dream of a snow-covered trees, of shorts days, cold temps, and relentless storm cycles.
We go through swings all winter long. It warms up, its gets too cold.
Mini interjections of summer into winter.
Maybe, just maybe, somehow, winter could come back, and interject into summer?
No. It never really happens though. The stock market can plummet, pensions can fly out the window, but summer doesn’t crash.
…or maybe, it does.

The record storm was well heralded by the weather service. All week the forecast discussions chatted ceaselessly about the potential for a collision between an Arctic low and an Aleutian low.
If the two met, snow was going to fall. All the way down to the ocean.
It happened.
Anchorage broke records: Longest snow season, formerly 230 days, snow on Saturday morning made the Winter of 2012-13 232 days long (as measured from first to last measurable snow, or September 29, 2012-May 18, 2013; most snow in a snowfall at the near sea-level measuring site, .3 inches.
Better yet though, was what fell above sea level.

Jack and I headed to north Anchorage and drove up Arctic valley mid-morning Saturday. Gray clouds stuck to the peaks, but as I looked out the side-view mirror of Jack’s rig, I tried to ignore the fact that the snow was billowing out of the wheel wells like only a cold dry powder can do.
We hit the base and started making short laps in the swales of Arctic Valley.
Unbelievable, the snow would have been awesome on February 18. After two runs, a posse of AVrs showed up and kicked on a lift. We debated if they would allow us a ride, but decided to head back to Rendezvous where we shares longer gullies with only two others.
The skiing was silly. Face shots every turn. Vis was lousy. Snow falling off and on all day, sometimes heavily. Except for 2 turns of wind-blown off the ridge, the gullies skied so consistently top to bottom the lack of vis didn't matter. Ride top temps on departure were 13 degrees. The last few inches of snow that fell were incredibly light. I was thankful the last coat of wax on my rock board was Swix blue. How often can you say blue was the right choice for a day in May?


My head was a wreck. I knew it wasn’t mid-winter, but everything told me it was.
We skied till about 5 before other obligations brought us back to town.

Sunday, under clear skies and in cool temps, I headed north and met up with Lizzy at her ski chalet.
We wanted to head into Delia Creek and ski some of the couloirs.
As we drove up the road though, we noticed that almost everything north facing steeper than some unknown, but very precise angle, had slipped, leaving the run out of a lot of the runs a veritable stew of snow chunk.
The re-frozen bed surface was slick and hard, and while the snow had fallen hot and wet and finished cold and dry, it wasn’t enough to hold it.
The pass was nearly empty. Snow revelers had changed seasons, so we pointed our attention to Marmot’s NW ribs and did laps there, where the angle was slacked enough to hang onto most of its snow, but still more than steep enough to have a lot of fun.
﻿﻿ 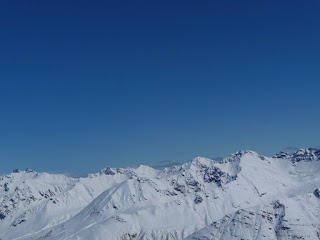 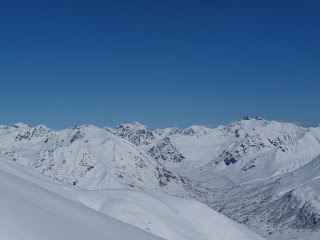 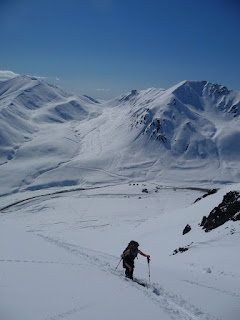 My fantasy realized, (OK, I went and slammed a ton of vert in the Front Range after work on Monday too) I can't think of a better way to end the season. I'm ready for summer adventures﻿.
Just a couple months before pow season.
Posted by Dante at 11:09 AM