I didn't fish much this summer compared to previous summers. King fishing was largely closed for most of the season, again, and a surge of fast-moving sockeyes made for a few days of good red fishing followed by not a lot of action. I tried get out of Homer with my friend Larry in July, but rough seas shut that trip down.
I wasn't too disappointed though, one of the nicest Junes and Julys made for excellent riding, and August had hardly arrived before it began to rain and dampen the trails. Time to fish.
Just in time, my dad and my sister came up to visit the first week of the month.


We did a combo trip out of Seward. The combo trip is fabled in AK. You can catch limits of multiple species of fish. In my slimmer days, when groups would hit it right, they would come back with about 200 pounds of fillets apiece of ling cod, silvers, halibut, and bass. That being said, it takes some cooperation from the fish, and more importantly, the weather, to make this happen. I opted to take the two on a combo out of Seward with low expectations, knowing that we would get to see some great scenery, whales, wildlife, and maybe some fish.
We did OK. 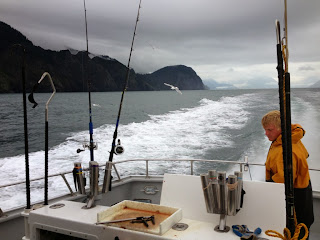 Otherwise we confined fishing to the river.


I also took my sister on a hike up Summit Creek. We had a nice window of blue sky and saw a big billy and a huge caribou. Pictures are here: Summit Creek Album

The week after my family left, one of the biggest slugs of silvers hit the river in recent memory. The fishing was unreal. I high tailed it back down to camp Friday after work, and Ryan and I hit the water early Saturday for what could be one of the most epic days of silvers I may ever know, though I hope not.

The day started with a triple, and we landed all three; followed by a double, where we landed both, thanks to numerous nets onboard and teamwork.
The day just got better.
A perfect storm erupted, where we had an awesome group of folks in camp, and bad weather out on the salt that blew off two groups that were planning to go halibut. We fished just about everyone in camp, limiting everyone. Ryan ran the boat, put us on the fish, and kept the bait fresh, while I tended net, managed tangles, and brained and slit gills. By the end of the day we killed 40 silvers, my hands were sliced to shreds, and I could barely stand. Pure awesome. 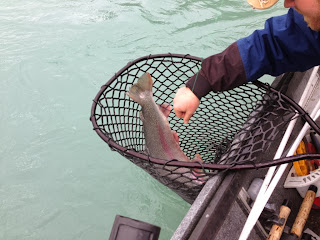 The next day we only had one group to fish, but Colin came down, and a fellow in camp signed on to go fun fish with us after. The fishing slowed a bit, but we still had a blast. 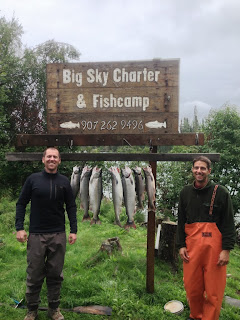 I was back down at camp yet again the following weekend to help out with the United Rental event. While this is always a lot of work, the United guys are a fun group, and I look forward to seeing them and helping out every year.


After three weeks in a row at camp fishing, I was happy to take a little time away and get some more riding in, but in late September Lizzy came back from her last hitch, and Steve and Rondi took us out on a cold and somewhat slow day to fish for big second run silvers. Bright foliage and scales ruled the day.
EDIT: Lizzy also taught Rondi and I a new way to bonk and bleed a fish in one, though the "Tarantino Style" is probably not approved by PETA or animal rights groups. 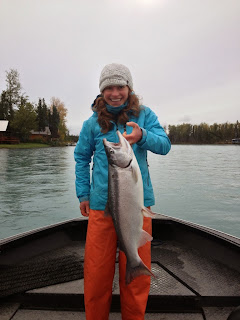 What a great Summer summation! We didn't do nearly as good, but we did three days on the Swanson River that had wave after wave of Silvers. Canoe and kayaks being dragged from bank to bank. Our freezer is full enough, but man oh man you killed it!