I’ve been lucky to have picked up some amazing new gear in the last couple of years, but the 2012 Jones Solution Carbon splitboard might be the single most revolutionary gear purchase I’ve ever made.
How do I even start?
When I got my first splitboard in 2009, after years of hiking with snow shoes and a board on my pack, I called the split revolutionary.
That happened, again. 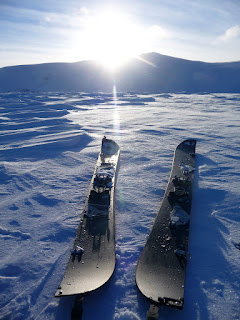 The Solution was designed by world class mountain athlete, Jeremy Jones, and his team, for riding that is pushing the boundaries of the sport.
It should come as no surprise that this board performs as such.
It should also come as no surprise that this board carries a somewhat hefty price tag.
To compare this board to another world I know, this board is the equivalent in my mind of a carbon fiber framed 6-inch travel trail bike that can crush climbs and downhills with equal finesse.
My first impression of the Solutions was how light it was.
I paired the Solution with Karakoram Split30 bindings, and Burton DriverX boots.
This is overall, one of the faster, lighter set ups available.
On the first skin, I felt like I could climb like a champ. The lack of weight underfoot was noticeable, particularly on longer approaches and never ending ridges.
Also helpful was the minimal side-cut.
Side hilling on hard snow was fairly easy, and I noticed a lot less side slip of my downhill leg.
Also helpful on this front, to give credit where credit is due, were Voile touring mount riser blocks, which help the climber put more tourque into their edges.
These blocks also pick the toe of the boots off the deck allowing more swing for steep kick turns. The lower ride of the tip and tail also makes this board less likely to “shovel tip” into the powder on the front end, but easier to anchor the tail. 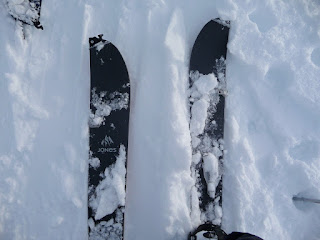 But snowboarders have been booting up skin tracks forever, so climbing is not nearly as big a deal as the downhill ride.
Let’s just say, that in three years of predominantly backcountry boarding on a split, I had basically forgotten what it was like to ride a real snowboard, but easily could have taken an ironing board down most mountains and not known the difference…that is to say, splitboards have not been known for their awesome rides.
The Solution breaks that type cast.

Even sawed in half as a split, this board begs for the steep and deep.
Riding this board on moderate terrain or thin powder is like using a sports car as a grocery-getter, you will not see the Solution’s full performance value until you’re staring back up at your own tracks in a 40+ couloir that was a foot deep and unsettled.
The ride quality and control comes from a few different factors.
First is the board’s reverse camber, which spread’s the rider’s weight out over the base, allowing the board to float higher atop the snow, even in deep and unsettled conditions.
Second is the forced wide stance mandated by the pre-drilled mounts.
Compared to other boards, the Solution demands the rider place their front foot much further toward the nose than other boards. This also helps with the above point in spreading the rider’s weight out, but also means the board is more reactive to subtle inputs from the rider. Lastly, the side-cut is marginal, and the board is nearly straight-edged compared to other boards, giving it a lot of steering power.

When all these features are combined you get a board that rides high and fast even in deep snow, and is fairly reactive.
When I say “fairly reactive” I mean, some people might call it twitchy, but keep this in context: the type of riding that the creator of this board is doing involves technical lines where one missed turn could be the last missed turn.
I can’t say I’m doing that kind of riding, and it took a few rides to harness all that power. There is a fine line between making nice arcing turns, and throwing up 15-foot powder sprays burning off too much speed because a bit too much pressure was applied to an edge.
I will admit, on the first few rides, I threw up some epic sprays when I hammered a corner too hard and cut my speed way more than I wanted to on aggressive carves. It took a few outing to get comfortable.
Once the balance is struck though, suddenly you can put the most old-school squiggle-butt skier to shame, or rip down a 1,000 foot face making fewer turns than there are fingers on a hand, with equal ease.
Maybe, just as one should be careful behind the wheel of a powerful sports car, one should not get over confident, but I know that much of the calm I felt at the top of some of last season’s prouder lines was, at least in part, thanks to what I had underfoot.


A few downs: The carbon construction, while light, is also not as durable. The base shows no signs of wear that would be inconsistent with normal backcountry riding. I kept this board in the garage through the prolonged early season and out of the rocky Anchorage Front Range. The top sheet however, lost a few chunks of material due to what I would consider normal wear; mostly the two skis slapping each other while skinning or incidental hits to remove built up ice and snow (obviously I tried to use the karakoram bases as contact points when hitting the boards at transitions, and the soft handles of ski poles on climbs, but occasionally they will get jarred together or hit something harder; that’s what happens on wind-blasted ridge lines while storm skiing sometimes).
The black top sheet also warms up easily, allowing snow to bond to it easily, at temperature ranges colder than what might occur if the board was a brighter color. That being said, I like the clean look of the board. I have never been a fan of ski/board art, and prefer the utilitarian look of a clean top sheet and base. I tried rub on wax and cooking spray in the spring to reduce snow build up. Neither worked particularly well, though thanks to having the Pam “baking” cooking spray, my board did smell like cookies for a weekend.
Posted by Dante at 10:22 PM

thanks for that, very useful

Was out in Zermatt Switzerland at the weekend for a little bit of pre-season practice. Fresh powder so left my Prior MFR and Kessler Ride at home and decided to try a Jones Carbon Flagship on rent of the weekend. After one day I went back and said to the very helpful guy, look this is amazing off-piste (40-50cm fresh), best I have ridden but I am not interested in buying it. Walked out 1 hour later with the Solution and Karakoram Split30 bindings!! fortunately for the bank manager I was already wearing the Burton DriverX boots.

This is just the information I am finding everywhere. Thanks you, I just subscribe your blog.