The wind spit another onslaught of spindrift into my face and stung across my skin; the sight across the Pass was inspiring only by early season standards; thoughts of lurking weak layers, incoming warm weather, and legs that were unseasonably tired swirled in my head: "I'm so done with this winter," is all I could think. I was just completely burned out feeling.
All in all, last weekend was pretty sweet, but, it came at a price, and one fact has become clear: this winter has beat the hell out of me.
Some people who live here develop cabin fever this time year as the long season of cold and snow, still often weeks from relenting, finally gets the best of them.
For me, it's the opposite. While the low-landers revel in what has been a milder winter then has been observed for most of the eastern seaboard, for me, I can finally relate to how the snow-bound lover of spring feels when another blizzard pummels their world - the caveat being that it is a lack of snow that has driven me to this.
---
Anchorage picked up a surprise shot of snow last week, blanketing Hillside in a much needed 10 inches, with two feet or more in the Front Range.
On a good tip, Dan and I headed to the end of Canyon Road on Friday. While conditions from the gate were un-inspiring, the snow depth grew quickly 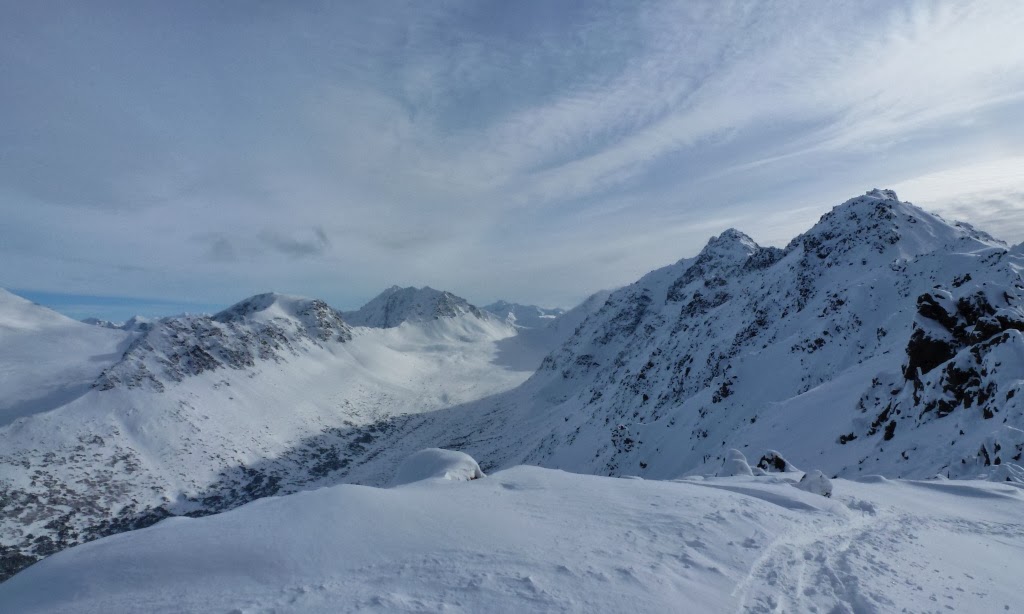 We enjoyed a relatively trackless Peak 3 with only 3 other people through the early afternoon before heading back to Peak 4. 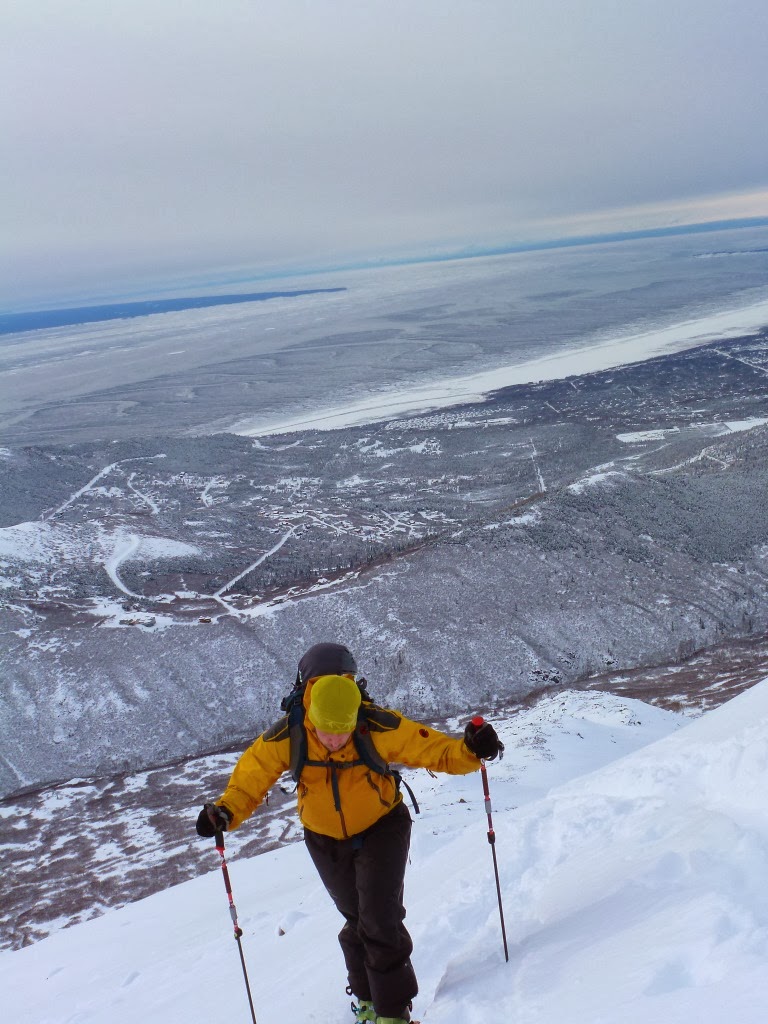 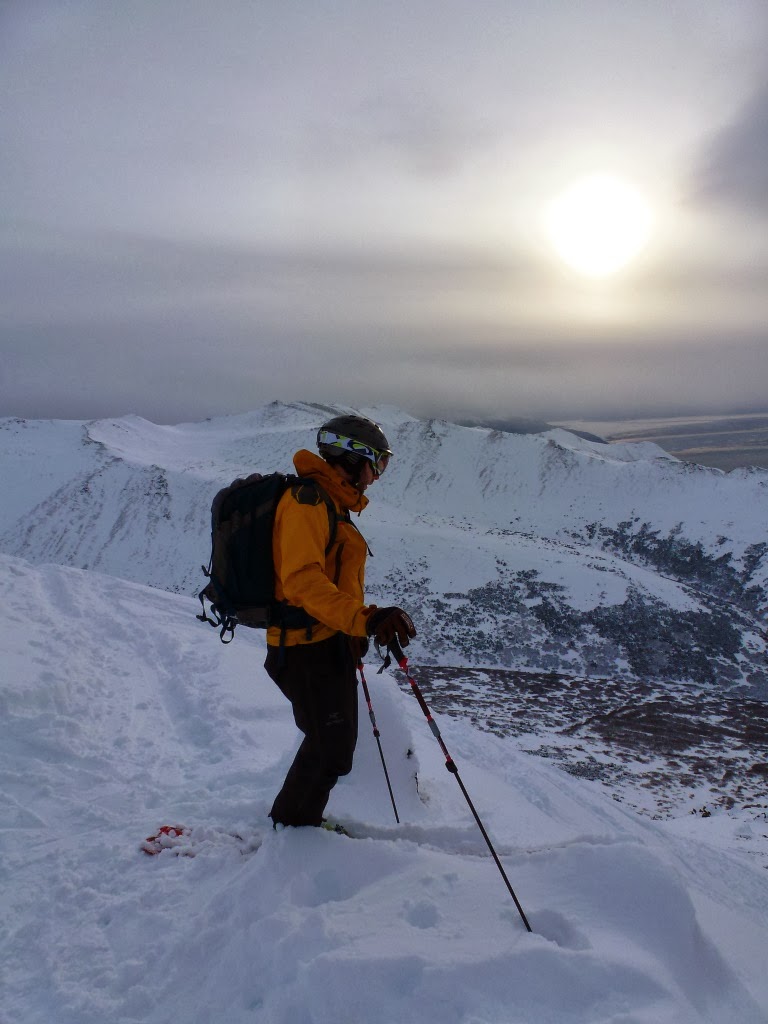 The FR snow skied incredibly well: consolidated and supportable powder. So long as you followed the FR rules and stuck to the filled-in gullied and lee-side ridges, a rock-free experience was just about guaranteed. 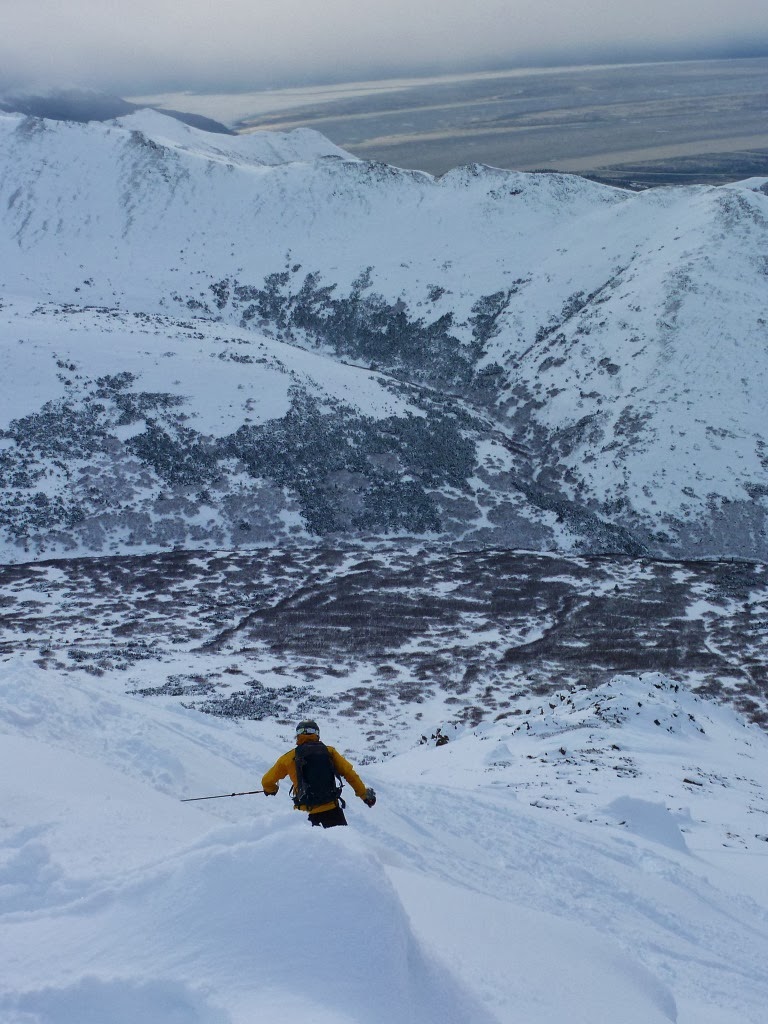 On Saturday, deterred by one objective due to visible tundra in the middle of the giant slope, and a guaranteed heinous exit, Nathan and I headed into the Girdwood Valley to explore. In keeping with how unusual this winter has been, the snow haven of Girdwood has been missed by most of the storms, and sports a thinner snow pack then even Turnagain at comparable elevations. We set our sights on a valley that looked to have some promising gullies and couloirs and made our way through the alders.
﻿
A reverse-C-shaped couloir caught our attention, and we headed for it. As we climbed higher into the alpine, the snow depth actually decreased, indicating that the winds had raged as the snow fell, leaving only a few inches of fresh powder over a hard and corrugated surface of recent and old avi debris that had spilled from our chosen line and its neighbors. We swung wide to the climbers left of the apron and then traversed back toward a rock abutment at the couloir's mouth where we planned to transition to booter-mode. Heading across the apron, I began to feel very small, isolated pockets of styrafoamy slab, and we spaced out. As I neared the rock band, I got a bad feeling.
Sure enough, a few steps later, I triggered a massive collapse. The snow under-foot settled about an inch and a half, with uphill and lateral propagation.
"Snap-crackle-pop" went the slab for about 3 seconds as friction and gravity battled beneath my feet to determine if the snow would find a new equilibrium in place, or farther down slope.
Fortunately, friction won, but it was way too close.
"We're done!" Nathan yelled from behind me.
Our spacing was good at the very least.
We lapped low-angle powder laps with much higher quality snow then we found in the alpine, burning the legs into oblivion. 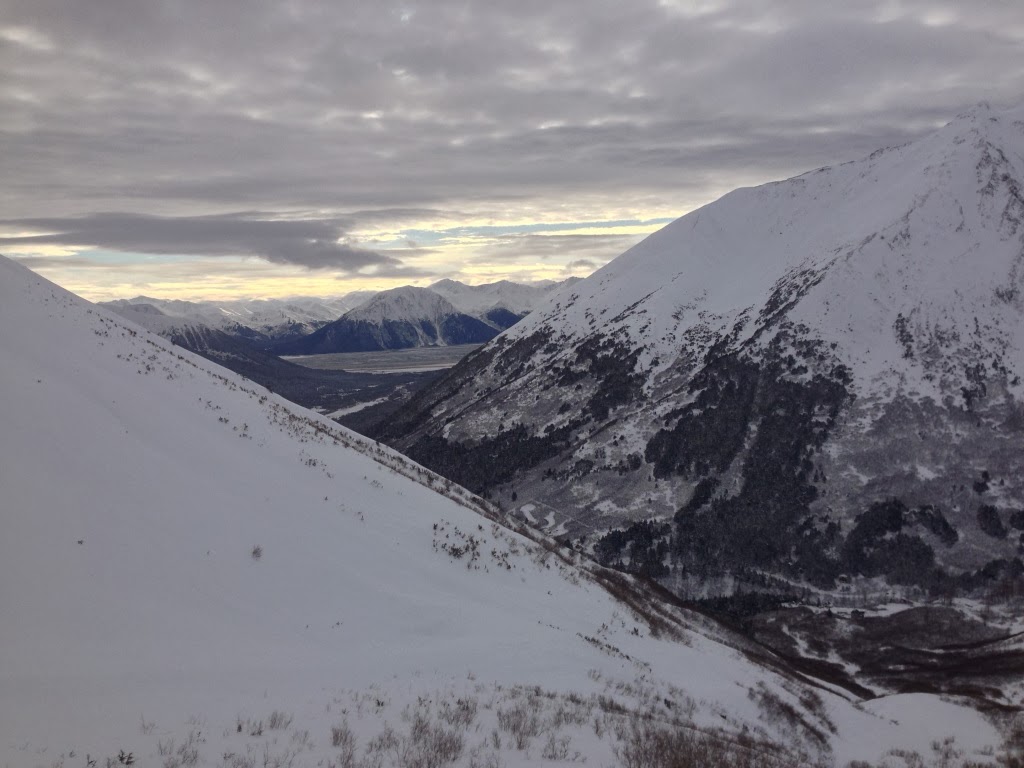 Cody, Nathan, and I headed to Turnagain on Sunday. The wind was whipping off almost all of the peaks. Initially, Corn Biscuit seemed to be staying out of the brunt force, and the north gullies held some promise of being sheltered. Maybe we were right, but by the time we reached the ridge, the wind had cranked it up with 50 mph gusts, per the Sunburst weather station, and loose snow was blowing every which way. We were pinned by a few particularly nasty gusts, and stopped at the entrance to the first of the gullies on the summit ridge, unable to see even halfway down it at times because of the blowing snow.
The entrance was wind-blown ice, and the remaining was variable, punchy to shallow powder. It actually didn't ski that terrible, and perhaps, were it not for the wind combined with the mental and physical fatigue, we may have sacked it up and gone back for a couple more, but it was just hard to justify.