This winter is not happening. Snowless, rainy, record warmth, and the forecasters are saying that the worst may be yet to come: cold, dry, and windy.
Some folks call it a calamity, but a scan through the weather records shows that while dismal, this winter is not so far off from those of 2003 and 1983.


Suffice to say, backcountry skiing has been anywhere from suicidal to marginally passable until recently.
In-town activities haven't fared much better. The groomers worked some incredible magic to transform the thin, hard packed Hillside trails into what feels like lake skiing with hills. Winter biking is marginally better, though patches of ice promise instant wipeouts or worse to the unwary. I’m grateful nonetheless, to have options.


This is not to harsh on the snowmachine crowd, I don’t have any problem with them going where they’re allowed to go, but they sure can make a racket.


Thanks to the warm up and cool down, the snowpack is pretty damn tough right now below 4,000 FSL in Hatchers.


I got it in my head that Sunday might be a good day to take the fat bike north, and ride the snowmachine trail from Independence Mine toward Willow and back.


Saturday was spent on skinny skis, skating laps at the Independence Mine ski trails with Lizzy.


The snowcat-groomed corduroy was as good as it gets in all of Southcentral, and the groomer had opened up the meandering east meadows loops as well.


We found packed powder conditions on the groomers, and at about the elevation of the Mine and upward (3,500 FSL), a sweet carvable base with 2 inches of dry snow on top. Two inches is a little thin for a split board, but practically blower for narrow skate skis. Carving turns off the sides of the trails was a sweet bonus. Crowds were very light, even on Saturday.


Sunday, I headed back up the road solo, and started my day in bright sun and total silence riding the groomed road over the pass.


Conditions on the snowmachine trail were as good as I could have hoped for. The machine’s tracks did soften up the surface a little, and it might have been nice to share “trail breaking” with another rider paceline style, but in other sections it was practically like riding pavement. I did have to push the last, steep, ~50-foot hill to the top, and likewise had to do the same on the way back, but otherwise kept my feet clipped in for the entirety of the 4-hour ride..


From the top of the pass, I had nice views into the Alaska Range.
I expected to get chilled on the decent, but quickly found myself back out in the sun, and stopped to de-layer.


About 5 miles from the car, I hit the Lucky Shot Mine, where I found the road had been plowed.


The grooming clearly ended here, and I didn’t see any obvious snowmachine corridor headed down valley. Perhaps the road had just been plowed?
Riding a plowed road didn’t really turn me on, but what did were a lot of tracks headed up Craigie Creek Valley.


I rode the bike off the cord and onto the open crusty snow…and kept riding.


The crust was strong enough to support my bike, though it was a little more efficient to stay on snowmachine-packed trail for the most part. Where the machines picked SFU lines up the steep moraines, I veered off and contoured around on imaginary singletrack. It was a bit surreal, and I felt almost like I was doing something wrong (stay on trail!). 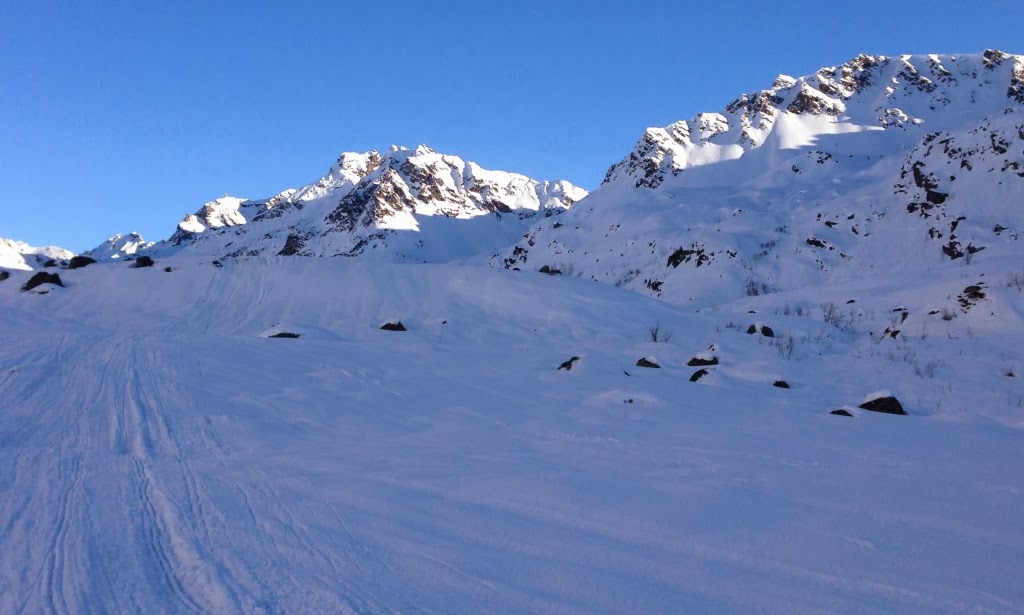 I made it 3 miles up the valley toward the base of Dogsled Pass, before steering left up to a broad, sunny slope. The crust started to get talkative underneath, and a few sleds that must have come through while the snow mushy the previous week, had left behind foot-deep trenches, perfectly square tapered on the sides and rock hard at the bottom. The thought of rolling into one conjured images of railing a deep, wood-lined water bars on a fast descent.

I called it, had a snack, and enjoyed a speedy roll back out that valley, playing on the features where they presented themselves.
The climb back up to the pass was uneventful. I saw only two other machiners on the way back, bringing traffic to a grand total of three for the day.
It was indeed, a Super Silent Sunday.
Was there something on TV that I missed?
Posted by Dante at 11:59 PM

There is a fantastic line from Friendship Pass down toward the shacks below Dogsled Pass. It's an up-and-over type of trip, or a loop. I've never trusted the north side later in the season, but early season has been reliable (and relatively safe.)

There is an excellent route to this place from Independence via Friendship Pass. Early season down the 'backside' (north) of Friendship Pass has been great and relatively safe. It's a fun part of out-and-back or loop trip.