Long weekends like this one are the reason you put up with so much bull from AK.
Sloppy weather at sea level in the final days of 2014 translated into some of the best snow of the season in Hatcher Pass. The Talkeetnas were largely spared the outflow winds that buffed the Kenais.
Nathan and I headed north on Thursday. The ground fog and warm misty rain was thick from Anchorage to about Turners corner; from which, blue bird dominated.
We found the Pass to be a quiet place despite the holiday, and after perusing some of the other lots and recent avi activity, settled on Marmot’s west ribs. We were the first to get the central rib, and then lapped our own tracks on the same rib on run 2. That’s a rarity. We went back up for one more with a little more late-day company. 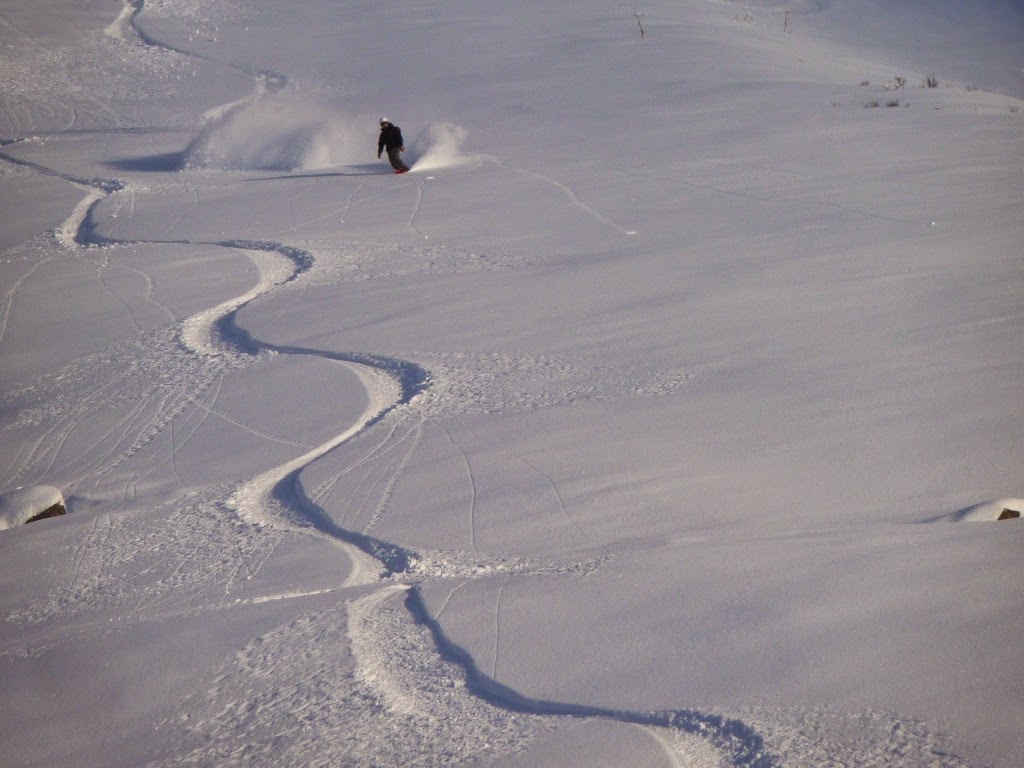 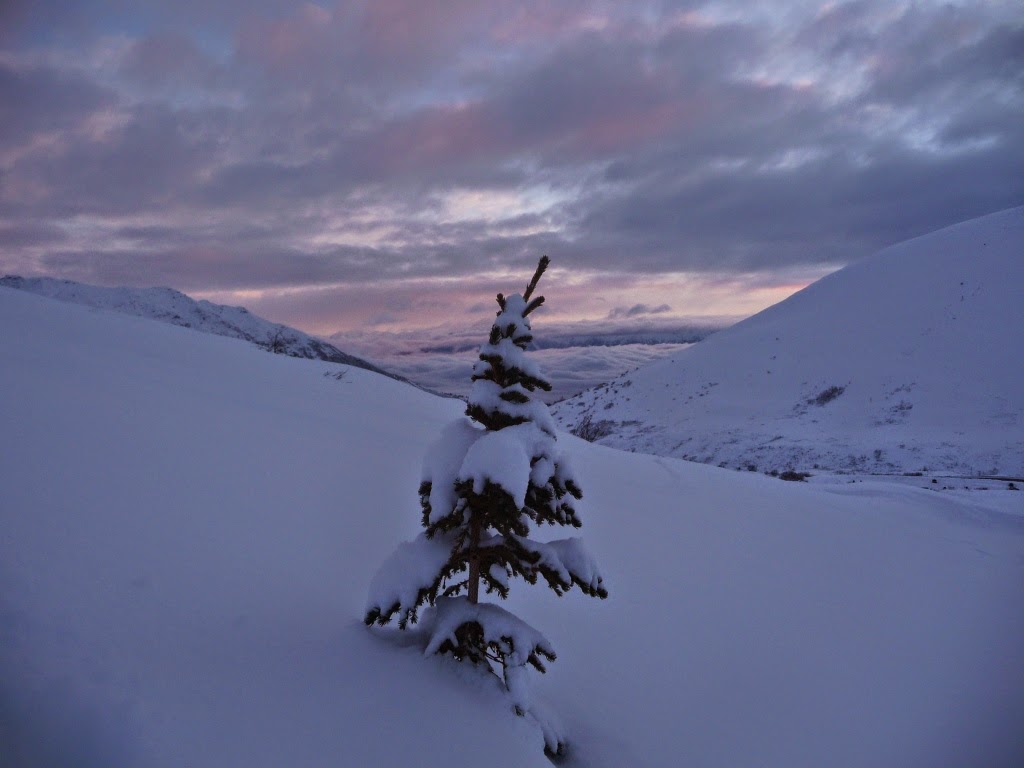 Friday, the word was officially, out: Hatcher was in. I headed up with Joe, and while looking around, we ran into Brian. We decided, that though the crowds had arrived, Marmot still had a lot of untracked snow, a fact that surely would be untrue by the end of the day.
We joined the throngs, but were hardly disappointed. We put the 3rd through 6th set of tracks on the upper fin, and found plenty of open space in the mountain’s mid-section for runs 2 and 3. We were lucky to be right behind Andy M. who single-handedly busted a new mid-mountain skinner in the soft snow, taking out the traverse.

"He turns like he's got a blog." A compliment or a stinging burn? We dunno, but does it matter? Video: J.E. 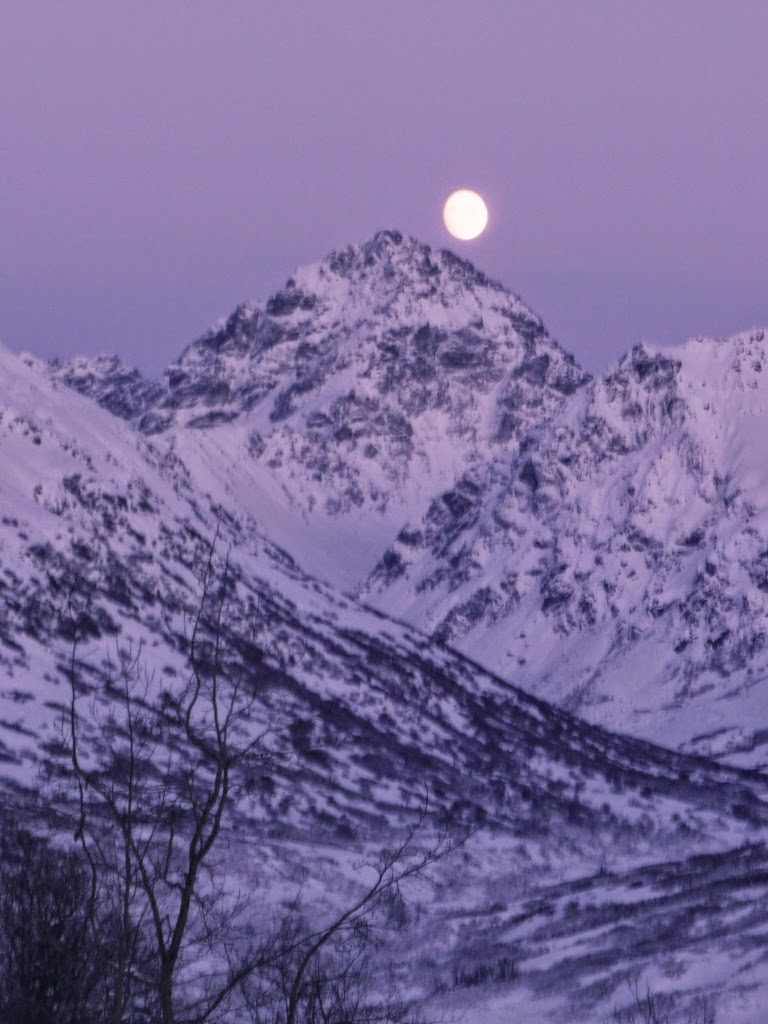 As we rolled out Friday night, Joe and I began to talk options for Saturday. Knowing the skier pressure was growing, and with temps forecasted to crash to single digits, it was time to get start thinking big.
The south face above Goldmint TH caught our eye. Near enough, very fat, lined with wide ribs to plant a skinner on, and in the sun to stay warm on a cold day.
Nathan and Cody were in, and we launched on the early side Saturday am.
Temps were chilly, but warmer than we expected, a blessing and a curse. Alders were pinned down near the trail head elevation making ideal ski snares, but about a mile and a half out, we found a way to link the meadows to our face. Two incredibly hardy snowshoers were busting their own track upward on the ridge. While I didn’t envy their mode of travel, I admired their fortitude to plow through. We veered off their track rather quickly, and the snowshoers turned around about 1/3 the way up.
The ascent sucked: deep snow and a steepish slope made for heinous breaking and innumerable kick turns. Higher up, we encountered a few suspect pockets of wind slab. As the sun began to make its presence known, these pockets became well worth avoiding.
After 2 hours we made it to a point of relief in the alpine. A half hour later we topped out on the ridge.
Up top, the snow was thin, but we had sun and no wind.
I originally had thoughts about following the ridge the rest of the way to the peak west of Idaho (West Idaho Peak?). Google earth showed that it might have some potential north-facing terrain. That being said, we had spotted slides in similar north-facing terrain in the Little Su’s tribs. Skiing blind down the peak had little appeal. Also on our mind: the continued cooking going on below us. We opted to get back down.
The run skied like a big face, but was expectedly variable. Up top, all of us found gremlins, and lower down, some of the ribs slashed down to tundra on a hard carve.
It was a proud line, but probably one I won’t repeat.


So...I got a GoPro as a gift this fall, but there really hasn't been a good reason to bring it out. 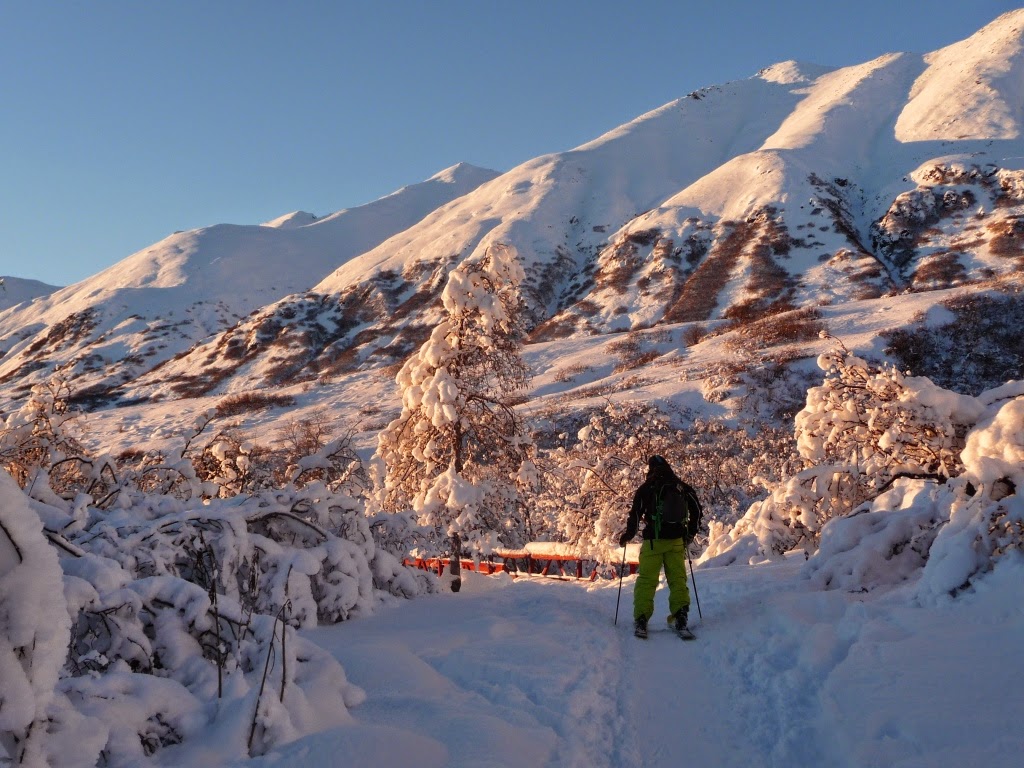 While in the lot, the discussion turned to Sunday. We put Nathan’s binocs on the north face of Government. We studied it, and were surprised to see both a lack of tracks or slide activity, aside from typical sloughing. We knew there would be a good skinner for access, and the plan was set.
Sunday am the temps were much colder, reading only 1 above at the trail head. Thing is, that’s what we wanted.
As expected, access was rather easy, thanks both to multiple skinners, but also, a snowmachine highway that went all the way up and over the saddle between Government Peak and Peak 46XX.

Rant: I’ve got nothing against sleds, I think that’s clear. I’d happily use one. This isn’t motorized vs not, this is open vs closed, and protecting an incredible ski resource. This area is definitively closed to snowmachines, no ambiguity about it. There is no loop-hole, no, “it’s actually open but basically illegal to access” (e.g., south side of the Lil Su). It’s just f-n closed. The only gray area, it’s managed by the Mat-Su Borough as opposed to the state. The latter agency is far better endowed and still struggles to enforce closures in Hatcher. Translation: it’s probably going to take community enforcement to keep this bowl from turning into high-mark city.
Rant over.


Along the skin, we studied the slope. There were two small pockets that had popped, one sympathetic to the other, though surprisingly, neither went to ground. Both were escapable.
From the saddle, we had a short skin on the ridge before it was time to go into booter-mode. The boot was variable, and ranged from waist deep to supportable. I thoroughly enjoyed the waist deep sections… We rotated through lead from safety point to safety point, and I ended up doing the last pitch over the rimey summit. As I stepped over the peak, I saw to my disbelief, a group of 10 skiers approaching from the Frostbite side of the ridge.
It was the most demoralizing sight I could imagine, and as Cody and Nathan joined, we grumbled at our bad luck. The line we had picked hardly seemed like it could support 13 tracks. We made our way down from the peak and met the group exactly where we planned to drop.
“I bet you guys think we’re here to ski that line,” one of them said.
Nope, turns out, they were out for a ridge line tour, and planning to ski the sunny south slopes back to Palmer.
Relieved, we pulled out probes and p-cord and began to hack at the small cornice that over hung the slope. There wasn’t a lot of over hang to break off, but we dropped a few microwave-sized blocks.
I was expecting deep, sugary, bottomless conditions as I’d encountered the previous three days. To my surprise, the blocks bounced off a firm base and glided down in boot-top soft…whoa.
The last time I skied this line it was April in a deep year. At that time, the entry did require a mandatory from an over hang, but relief came quickly on a shelf that at the moment was instead just exposed rock.
Entry to the line from the middle has an intimidating feel: wide and steep at the top, it funnels and gets a bit tight and then opens back up.
Cody dropped first, cutting the slope with 0 reaction. Here we go Pinnacle Couloir!
He took it right down the gut, making beautiful turns in cold blue snow that just vaporized with each turn. From the mid-point safety spot, he stopped and radioed up: bomber.
I went down next. Three deep-breaths, fist bump to Nathan, and took it straight to the gut.
The snow was cold; stuck to the mountain with no plans to go anywhere. We regrouped, and skied out the lower half of the line. A hasty transition in the freezing bowl, and we scurried back up the saddle and over to the top of 46XX. From the sun-lit ridge, we watched a group of three make a beautiful descent in a similar line to ours in the back of Toilet Bowl. The descent back down to the car was the usual 4068, exit-run shenanigans: quality vertical, messing around with alders and wind lips, getting messed with by said alders and wind lips, and coming up with children’s songs about STDs. 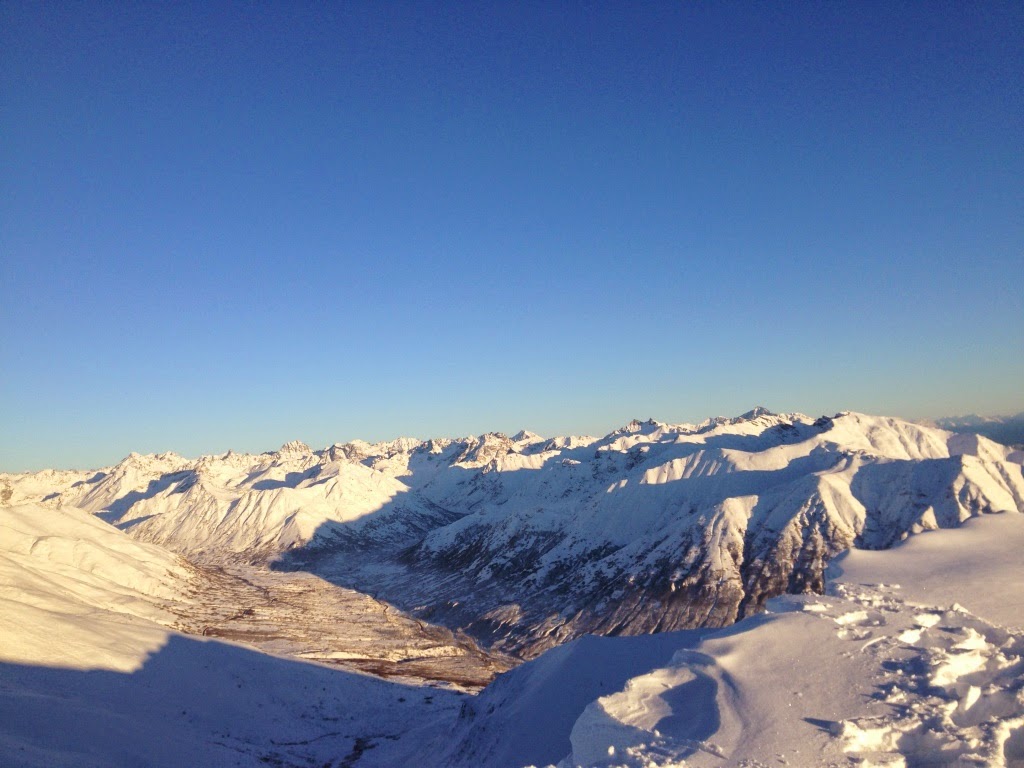 Nathan in the top of the run.

When we piled into the truck and coasted back down through the canyon at the base of the pass, it hit me…I leaned a bit into the pile of packs and boots, felt my head grow heavy, and realized, I was exhausted.
Posted by Dante at 10:17 PM