The sneaker winter of 13-14 keeps on sneak’n.
Honestly, I was pretty depressed by the end of last week, and the only thing that seemed to be keeping my sanity nailed down was the fact that I’d soon depart for a week of skiing with friends in a comparatively colder and wintry Jackson Hole.
Though skate skiing is do-able in Los Anchorage, it’s far from inspirational. Ice biking on my studded hard tail (what’s the point of fat tires right now?) through the trails north of Basher Road on Thursday night with Ethan and Brian, we splashed through standing water and slush over ice.
“This is about the best thing going,” someone remarked.
If that doesn’t drill into your conscience as defeating, pass me some of what you’ve been popping.
Kyle rallied me to head up to Hatcher for an after work skate ski on Friday. The reports of firm corduroy have been descent there, and despite my lack of motivation, I agreed.
We decided to ski Archangel, and as we started, I drifted over the edge of the fast and firm trail and stabbed my pole into the un-groomed snow a few times.
-
Pfft. Pfft.
Soft?
How can that be?
There’s a heat crust on top…but it’s wafer thin…this isn’t just skiable, this is actually pretty good.
-
I kept checking, waiting for it to go to crud, but as we climbed, it felt better and better, and the heat crust disappeared.
When we reached the end of the road, we pushed off the end of the groomed trail, and astonishingly, even on skinny skis, floated over the dense pow.
Kyle side stepped up above the road and began to cruise back down the valley. I followed, and we slid through the soft snow along a raised ridge until a little above Reed Lakes TH. It was worthy of a repeat and we climbed back up to the end of the road for another (well, Kyle is the true skier, so he skied the pow, I’m an imposter and prefer groomers on my skinnies).
Backcountry skiing was on, but with no snow in over two weeks, everything easily accessible had long since been hit in Hatcher. We planned to return early the next morning and cover some ground.

The day started with blue skies. We loaded our big skis and boots on the packs, clicked into our skate skis, and started gliding down the trail.
OK, gliding is awfully complimentary.
We weren’t sure skating with a full BC load would be better than just skinning or shuffling.
There was no contest between the two, and it was nice to knock out the in-bound and out-bound lateral with some comparative ease and speed.
With blue skies to start, we decided to investigate the SE Pinnacle Couloir, and turned off into the Webfoot Prospect.
Accessing the Webfoot was “interesting.”
The massive boulders presented a challenge, and we defied the laws of physics threading our way through, and over them. We ended up hugging the north wall of the valley, and soon found some old tracks. They were transformed and rock hard.
As it turns out, an assault squad had hit the Webfoot in recent weeks. They laid tracks in the SE Pinnacle and both the Webfoot-Fairangel crossover couloirs. Well done!
As we climbed higher into Webfoot, we began to see some real changes. Sloughing off the high rock faces from the warm up into many of the couloirs created chunky and more variable conditions. Meanwhile, weather began to blow in, and we soon lost sight of Arkose Ridge to our south. About the time the first flakes started to fall, we reached the base of the lower Webfoot-Fairangel CX Couloir. While short, it’s deepish and dark. Combined with the textured slough, we knew it would ski OK in the deteriorating viz.
We topped out as the squall opened up in earnest and viz cut down to nil. It felt good – to feel it snow, hard, even if it seemed obvious it was short-lived.
The line was challenging due to the transformed snow. At the one-turn-wide choke, it was bulletproof, and a slip up would have been dangerous.
Below that, the apron was smooth and creamy.
We skied back down valley a bit, and the weather abated. The early start meant there was plenty of daylight left, so we decided to head upward to the base of the SE Pinnacle Couloir and confirm it had in fact been skied.
Obviously, it had, but we decided to climb into the base of the chasm and at least ski its big, creamy apron.
As a side note, I was surprised to see how much pepper there was in that line. It’s easy to forget, the upper elevations of the Talkeetnas are sporting a mere 1/3 the coverage they had this time last season.
While we had golden light when we dropped the apron, the exit from Webfoot was far more challenging. Flat light conditions descending through the boulder fields presented a very real hazard. We slowly and safely picked our way down. We were able to stay on the wide boards (cross-country snowboard for me) along the upper section of Archangel, and snagged our skinny skis on the way to the bridge. From there, we transitioned back to our narrow gear and skated back to the car. 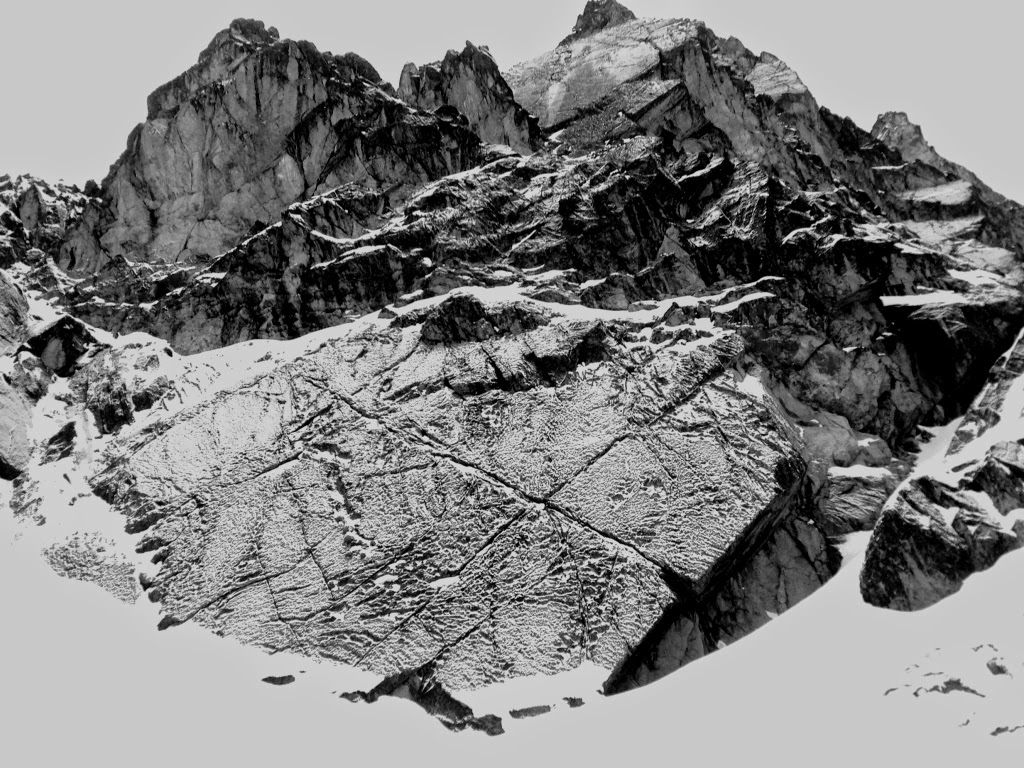 On Sunday, Cody and I did another dawn patrol up Archangel. We decided to keep it a little closer, and went into Sidney Creek. After sizing up the options, we aimed for the kinked south face couloir on Micro Dot. We knew it wasn’t going to go, but it seemed worth taking an up and close look. The added sun exposure meant the line had it’s fill of slough and chunky debris, but on the whole, it skied fairly consistently.
As expected, when we reached the crux, we found it beyond our abilities. Wall-to-wall it was hardly wide enough to side slip; passable snow was even less: 2.5 feet wide, and bullet proof. Oh, right, the slope below measured 50 degrees and the crux kicked up from that, so, 55 degrees? Absolutely do-able, but very high-consequence as it would require taking it straight-shot and then railing the punchy corner at full-throttle.
We dropped the lower half full of beta and inspiration.
Next up, we eyed one of the shady and cold lines. Sheltered, the snow was softer and lighter, but with coverage still lacking, it’s easy to forget that the innumerable buried boulders could be a playful stunt, or a knee shredding season-ender.
The line went down smoothly, and we were able to coast and double-pole most of the way back out the drainage to Archangel.