Catching a Break in Bertha Creek

Santa brought ScAk a pattern shift. For some little boys and girls, it was coal; for some little boys and girls, it was deeeeep.
The storm track shifted significantly, and a non-stop line up of powerful North Pacific storms started hammering the coastal mountains of the southern mainland.
Temps shot up across the region, Anchorage lost all its snow, and the freeze lines that had stayed near sea level for most of November through December climbed.
Between Christmas and January 3, the tree line zone in northern Turnagain Pass saw 9-feet of accumulation. Maybe another 3-5 feet has fallen since. As January wore on, the track shifted subtly to allow temps to cool off just a smidge and the storms to slightly de-intensify, but in general, the pattern has been about the same: ~5 days of storming (often with as many storms) and 1-2 days of brief breathing space; a classic AK wash cycle. The snowline throughout all of this has bounced around daily but remained fairly consistently between 800 and 1,800 FSL. Basically, alders – remember those? Ya, they can shove it. Heavy wet snow has sent them to the deepest depths they’ve been in in years!
Turnagain looks better than it has in 3 years, and thanks to an accompaniment by strong winds, some aspects are so filled in, they’re close to unrecognizable.
Other zones have not fared as well. Hatcher and the Front Range have just caught a lot of wind, and Summit, though it did see some accumulations, also saw very high winds (by Summit standards), which were a bit too much for the thinner snow pack there.
The relentless and intense storm cycle has made getting after it a challenge for the weekend warrior. Momma nature has been calling the shots on when she will let the N-Pac chill, and those days haven’t always lined up.

This has made for a whole lot of tree laps on Tin Can. Fortunately, with so much snow, fresh tracks are available daily, and there’s some ridiculously fun skiing to be had in nooks of that mountain that haven’t been ski-able in some time. Occasionally we’ve been lucky to catch a lull and a glimpse of sun for a run in the alpine, but it’s been nothing to write home (or blog) about.
Finally, on Friday, we caught a reasonable break.
Meredith and I headed up, taking a quick drive through the Summit zone to observe the conditions there, before settling on Corn Biscuit.
We followed a freshly broken skinner up the ridgeline and on to the second peak, where we ripped skins and charged down the south face.
Lighting was good, with the sun rising above the low clouds and putting its rays (they’re getting stronger…) on the aspect.
We found a soft carvable base that skied great. The only three other people on the mountain vamoosed after a lap, and one solo guy showed up. We broke a new skinner back up the face to the col between the 2 peaks, and tagged a second line from the same spot but veered down a slightly different aspect that held better snow.
For lap 3, with the evening lighting dimming, we dropped over the north side of the col into the middle north chute, guided by the rock fins, trusting the excellent snow we found there. The flat light exit from into the creek that drains Magnum-Corn Biscuit back to the road is quite the affair: a narrow traverse above a deepish canyon, it was a good laugh that the most exposed skiing of the day was found within sight of the cars. 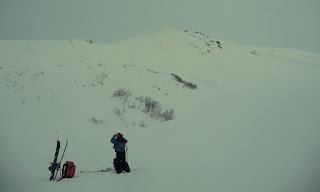 Saturday, a front was forecast to push in, but seemed to be taking its sweet time. Cody and I headed up Bertha Creek with the plan to ski Grand Daddy Couloir, or any chute on the south side of the creek, the thinking being that we would target something that provided good perspective in the anticipated flat light.
High stratus clouds moved in as forecasted, so we passed on the option to ski something south facing along the way, and headed to Bertha Creek Pass. We were about a ½ mile behind the Libbys and company. We never caught up to them, and did not know who they were until later on, but appreciated the skinner, and later the booter up the ridge. Conditions in the line itself would hardly evidence their passage.
Bertha Creek Pass is a great example of how snowpack+wind results in changes to the way mountains fill in from one year to the next. The BCP cornice is a shadow of itself, and the steep headwall of the pass is a gentle ramp this year. We were greeted by spectacular lighting reaching the Pass: the surrounding mountains gleaming in bright white, with the waters of Prince William Sound pumping a deep marine blue into the horizon. On Peak 45xx’s long, rimey, and flat summit, it felt lunar.
The drop into the GDC was a clencher. The wind had tunneled its way down the line and packed everything in tight. Conditions were chalky, and the heel side entrance sapped my confidence. I was pretty nervous about finding a patch of snow that would kick me out and send me sliding, but such was not the case. I hoped to find soft snow further down in the gut, but it was carvable chalk the whole way.
Both of us made a hell of a lot more turns than we thought we would. I tried to power edge once or twice and get some slough moving for added viz, but the snow was having none of it.
We could see the edge of the incoming front from the top, but decided to roll the dice and head up the east shoulder of Corn Biscuit. In a matter of minutes, the weather flipped, the winds kicked up, and lighting went out. Ironically, I skied this shoulder in the exact same conditions in February 2013 after skiing the south face of Pastoral with Nathan and Dan. Deja vous (LINK).
Just like last time too, we cut our losses and skied a sweet powder-filled gully back down into Bertha Creek and coasted back out.


Sunday was a work day. No, not one at the office, one for the legs. The forecast had called for a rise in temps accompanied by new precip, so the plan was to go to Tin Can and do a lap or two, then pack up and head to Alyeska for a half day of lift serve. I wanted to get the initial day of lift serve pain out of the way before Revelstoke.
Meredith, Cody and I sulked through the drizzle, but found fat wet flakes falling 300’ up from the road. We ripped skins at treeline where there was 6-10” of fresh, and the clouds were playing peek-a-boo.
The snow transformed about ¾ the way down the run, but we found Kellen and climbed back up for a second lap, and wouldn’t you know it, the sun broke through and so did the summit. The wind had basically smoothed the fresh snow in the alpine to a layer of super fast ankle-deep, and we went up and skied right back down the main bowl of Common, into the trees, and traversed out.
Alyeska was work. There was nice snow from maybe the top of Teds upward, but below that it was got slushy. Cody and I did one lap on the North Face, finding some nice pockets, but ultimately finding the cat track exit too icy and rocky to justify further runs there, and stuck to chair 6 and groomer laps thereafter. By the end of the day, the legs were burning, but I guess that was the plan.