Are you a skier/snowboarder?
Have you skied in British Columbia?
If Yes: cool, good for you.
If no: stop reading this post and go arrange travel, now.
Yep, I definitely wasted the first 30 years of my life not ever skiing there. Lesson learned.


The AK crew (and the Lower 48 contingent) descended upon Canada for a week of skiing trees, bumps, and soft snow.
It seems this trip is cursed to find the January thaw wherever it goes. Last year we arrived in Jackson to find conditions fitting of late March rather than late January. This year was similar in Revelstoke: a warm up pushed into the region and shoved the freeze lines up, but it also brought with it precip.


Our itinerary had us fly into Calgary rather than Kelowna – the closest airport – as it was so much cheaper. We rented a truck and drove to Revvy the next day, stopping at Kicking Horse Mountain to ski a half day there as it dumped.
Kicking Horse was awesome, but it could also be called kicking rocks. The ridges you have to traverse to get into the goods are shale, and guaranteed to nick the bases. Just deal with it.
We couldn’t ski any of KH’s alpine lines with such limited viz and heavy snow, but were happy to spend our day there doing top-to-bottom tree runs that stacked up 3,000 vertical feet per lap. All but the last 500+/- feet were great, where the snow transformed and got too heavy. I’ve been told the slack country off KH is really awesome too. Maybe I’ll get to confirm on a future trip.
We spent the rest of the trip based out of Revelstoke.


Cody gets all the credit for logistics, and got us a suite at The Sutton Place, the on-mountain hotel in Revvy’s little resort village.


So here’s what I can say on Revelstoke the mountain.
It’s really fun. Top to bottom, it sports 5,500 feet of vertical, or something like that, and it’s pretty well continuous, not some gimmicky “if you traverse from here to there BS.”
Unfortunately, due to the warm up, the best snow was found in the upper half of the mountain.
Anyway, if you look at a map of Revelstoke Resort, there aren’t that many trails…that’s because basically the whole mountain is the playground. A short hike above the Stoke Chair gets skiers into some more fun, alpine terrain, and the slack country opportunities are even better. Cliffs abound, and skiers have ample opportunity to throw themselves into the abys, but signage was plentiful enough for those who prefer to stay (mostly) on the ground.
Revelstoke the region sits a long way from anywhere. It’s just not super easy to get to. I think that’s good for a fairly obvious reason: it hasn’t totally blown up.
With Rogers Pass just a ways down to road, and a number of heli-operators nearby, it’s not that this area isn’t a well-known ski zone, it’s just that it isn’t super well known for its lift serve, yet.
In some ways, it’s kind of ideal. You have this ski area that can put you into fun skiing, even if weather or avalanche conditions aren’t great, but more importantly, you have some great backcountry skiing options right there as well, with a full suite of access options.
For my purposes, this trip is all about taking a mid-winter break from AK to do all the other kinds of skiing we just don’t get here (specifically, trees and lifts), and still have the option to go out and do a couple tours, it’s perfect.
Oh right, then there’s the economy. Canada was 30% off on this trip thanks to a strong American dollar. I bought a 3-day vertical pass in advance of the trip and paid about $55 US a day!
My biggest complaints about the area: dang it’s a small town. By the end of the trip, it was almost getting creepy when wait staff we didn’t recognize knew who we were, or we’d see people we had just met in town. I think if we stayed another week, we could have been considered locals. Because the area is pretty far removed though, alternative lift serve options are not great. Rogers Pass is a rugged drive if there’s weather and it’s regularly shut down for avalanche control, so busting over to Golden to ski KH isn’t a sure bet.
It’s also clear enough that eventually the owners of RMR want to see it blow up, turn into Whistler or some such crud. The 2008 financial crisis put the brakes on those plans, but I suspect that eventually they will resume development. 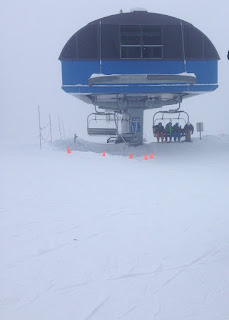 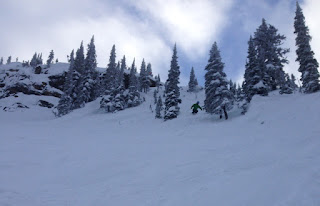 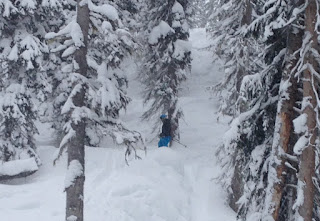 Along with 5 days of lift serve, we also did an awesome tour in Rogers Pass, took a heli ride into another zone to go tour, and did a day of low-angle heli skiing in the trees.


By far, the absolute highlight of the trip for me was the heli-assisted tour. Colin graciously footed the bill for the entire crew. We flew with Selkirk Tangiers, and our guides, Simon and Larry, were awesome!
Heli skiing has the aura of being hardcore and BA. Most the time, for the day-tripper, it’s not. It’s nice to get a lift to the top of a run, but expecting to ski agro terrain is bound to yield disappointment. Cat skiing, likewise, and indeed any guided skiing, can be frustrating to the competent and experienced backcountry skier: you’re lucky to ski more than a couple 100 feet at a time, and are basically out of control in terms of run and terrain selection the entire time.
My wiser friends have said that if you want to have more synergetic heli-ski experience, you really need to commit to the trip, and that means buying a package and paying for several days. Repeat business build relationships. In the scheme of things, it’s logical. Just as with touring partners, you probably want to get to know them, their ability’s, and their snow sense, before you charge off and ski the meanest line in the zone. If nothing else, it’s another good parallel between the guided fishing industry and the guided ski industry.
The heli-tour combo though, there’s something to it. Obviously, it’s cheaper than a full day of heli-skiing, there’s only one ride in and one ride back out. You get a free run at the beginning of the day, which is a bonus, but from there on out, it’s back to self-propelled. Simon and Larry delayed our start to let all the other groups (we were the only group touring) get out and find a zone, and then took us into their West Twin zone, where we never saw another bird until pick up time.
The big advantage to the heli-tour for the experienced BC skier is that while we were obviously operating in a new mountain range on an unfamiliar snowpack, we were otherwise very much in our comfort zone, and had ample opportunity to demonstrate this.
It took no time at all for our guides to see that we knew what we were doing, from the pre-requisite avalanche scenario, to putting in an uptrack, and skiing strong. Very quickly, the experience felt collaborative.
We could ask Simon for his thoughts on various runs, and he gave us feed back on what the stability issues for the region were and what his comfort level was. In turn, he did his best to get us on some fun lines, including talking us off a sizable cliff band…just saying, most guiding outfits will steer you way clear of such features, or try and keep you from hucking them to say the least.
Basically, my final take away, if you’re traveling somewhere new and want to go explore a little beyond, but want some professional help with snowpack and terrain assessment, this is seemed like a huge win. 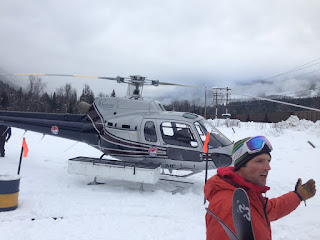 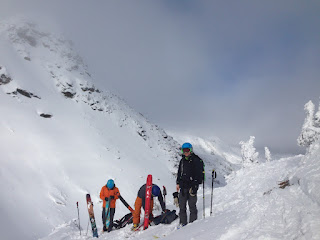 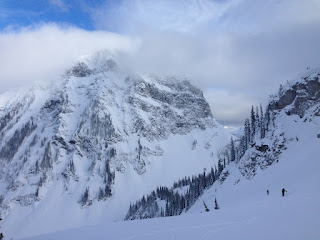 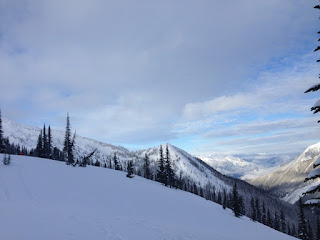 Larry and Simon were happy to give us a beta dump on Rogers Pass and where we should head for tour later in the week. As it worked out, Simon had an off day on Wednesday when we planned to tour, and he ended up joining us, which, was really flattering, I think, as I’m sure he has plenty of other folks he could spend time with. We ended up doing a longer tour up the Asulkan Valley that included a loop along the toe of the Illecillewaet Glacier, and skiing a couple fun runs in a zone called The Ravens. It was great to get to see a little bit more country, and we really benefited having Simon along, not just for his good company, but also to keep us on route. I think on our own we might have squirreled around a bit too much and ended up missing out on a run due to daylight. Larry wasn’t along for the tour, but he caught up with all of us later on in town for a brew. 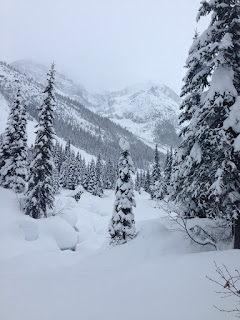 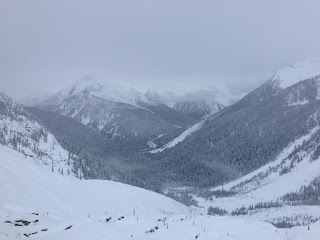 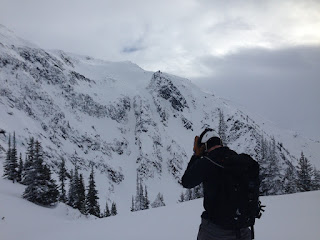 My friend and Mountain Guide, Jorg, tells me "ski-doo" assisted touring around Revy is terrific, too. Use the sled to get up the numerous logging roads and ski tour in the alpine, high glades and cut blocks back to the machine. At the Eagle Pass / CMH Revelstoke tenure borderlands (probably mutually poached), we came across an uptrack and a couple of downtracks. Followed the downtracks to a sled turnaround near the upper end of a logging road.