Entangled, I’m fighting through twisted sheets and covers.
Less than 5 minutes ago my eyes opened blearily to another spring-like day in the middle of winter. It’s Sunday. Am I going to ski today? How hard is it raining up there?
The screen on my phone opens immediately to the state’s DOT web cam page. I look at the images from Turnagain Pass. It’s cooler than it’s been the last few days, but the pavement is dark and glossy. Something like .01 inches of liquid precip every 10 minutes. Wow.
Next I flip to the Summit Lake cams. Huh, the road is white. My vision is still blurred, I flip to another camera. Ya. There’s snow on the road and in the trees. It was 40 degrees and pouring rain there 24 hours ago. Must be wet stuff.
Hmmm.
Next to the avalanche center’s page.
Oh good: extreme danger rating for Turnagain; limited on-snow observations thanks to a week of nasty weather and only brief respites between storm fronts; perceptible water values that seem fake. Tons of snow...somewhere up there.
Do I go? The hazard rating says no, but I’m not planning to jump into big terrain either. It would be good to get the decks on the snow, see what the story is, put some vert in the legs. This is going to break, some day.
What’s the alternative? Oh god. It’s so bad: it’s embarrassing; skinny skis on flat, groomed, trails; maybe skinny tires on flat, dry asphalt?
No. Not on a weekend in the middle of winter.
It’s enough to start a frantic battle.
There is no preparation for this. I can’t bring myself to pack a bag the night before for a ski I don’t even think will happen, the disappointment is too much.
Some years, are so unpredictable. This one is beyond predictable: storms, nonstop.
Some years, I read every weather forecast package like a child’s Christmas list: please, send us a storm track! Where is that parade of lows marching across the mountains burying their slopes?
This year, it’d be nice if that parade would just chill.
That’s it too. One to two degrees of Fahrenheit determine where on a slope measured in 1,000s of feet the rain will turn to snow; one degree goes a long way between starting the day sopping wet, or waltzing off from the car in a winter wonder land.


Gear starts flying, eggs and bacon sizzle; in the haste, eggs and bacon will fly too. Clean up can happen later.
Now it’s the car that’s flying down the highway, hydroplaning across lake-sized puddles. Pouring down rain hammers on the windshield. If I put an outboard kicker on the back, I might actually get better gas mileage. Absurd.
Turnagain is deserted. Three cars in the lot at Liability Mountain. It’s raining at the road, but I can see snow in the trees no more than 200 feet above, and they’re heavily coated. It snowed hard last night.
They really weren’t joking about those perceptible water values, huh.


The snow is there on the road in Summit, just like the web cameras promised. Three to six inches of soaking wet slush, and still falling. Pullouts go by, some still buried in a foot or more of nearly set-up wet concrete…or maybe it’s snow. One of the lots is cleared enough though, and the car squirrels its way to a stop. There’s another car here too, a guy named Matt, visiting from out of state. Expecting the potential for some deep trail breaking, it takes very little convincing to get him to come along and check things out. I think we make it all of 100 feet above the road before we figure out we have mutual friends.
The snow is heavy, but with every 100 feet climbed, it gets deeper and deeper, and still falls heavily from above.
By the time we reach the upper limits of tree line, it’s gone from 3-6 inches of mush to 18 inches of fresh.
Speaking of tree line, where is it? I was on this slope a couple weeks ago, and there is way more snow up here. These mountain hemlocks aren’t known for their exceptional height, but wow, I almost feel bad for some of these guys. It’s going to be a long spring.
Despite the non-existent visibility, the snow feels great, and the gentle rib beckons us to upward to ski from the cloud-covered summit. These mountains fall away from the sky at such a consistent angle, you can practically ski them with eyes closed, just keep making the same turn, over and over again.
Rinse and repeat. 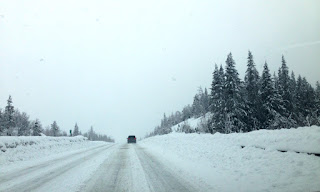 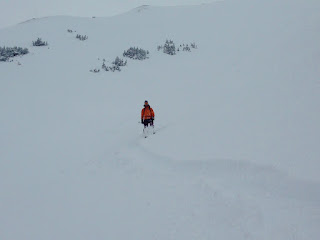 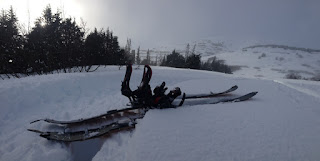 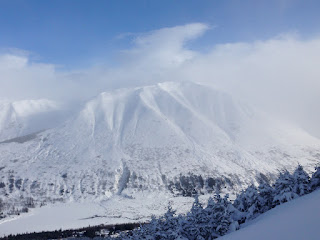 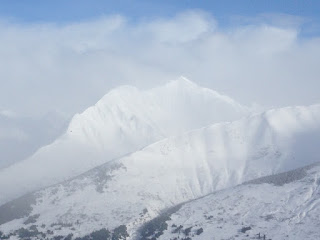