Block Creek and a Return to Spirit Walker

Trent and Tony have skiing in the Block Creek drainage dialed, and having skied through the zone a few years ago doing the Silvertip to Summit traverse (LINK), I’ve always wanted to go back and check it out.
A rare (for this winter) two-day window of clear, calm weather finally presented itself mid-week, and Trent was down to rally, getting a hero of the season award for heading out despite fighting off the remnants of a nasty bug that was sapping him all day.
We initially thought we’d go for the west face of the head wall, but as we hiked back along the ridge behind Manitoba, it became apparent that the sun was really starting to impact anything that was catching direct rays. Unfortunately, while west facing, the headwall’s pronounced features aren’t well protected. We decided instead to ski one of the NW-facing corner pockets. The chosen line had a really fun, tight entry that opened up into a wider but playful steep face below. I guess there was some back swirl or something from winds at the end of the last storm. On a board, the snow was fine, but Trent noted while it skied fine, it had a grabby feel on skis.
Taking note of how well filled in the north facing terrain was as we headed back to the broken-in uptrack, we decided to check it out. Huge cornices guarded most the entries, but we found a couple breaks that created “engaging” entries, and the snow below was deep, cold, and soft. 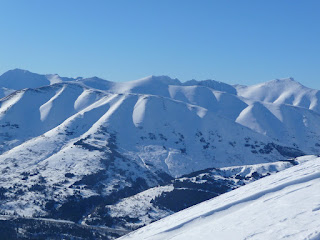 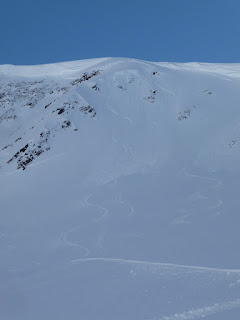 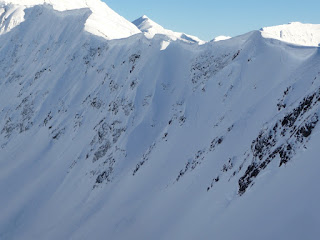 When Trent and I left Thursday evening, the setting sun was lighting up the face of Spirit Walker with a beautiful orange alpenglow. While Spirit is, in its own rite, a magnificent peak, it was hard not to take note of how incredibly well filled in it looked compared to my last visit in 2013 (LINK).
Despite this, the forecast was calling for overcast and snow showers for the rest of the weekend.
Saturday was spent lapping a favored storm locale as fat flakes fell off and on all day adding to the deep velvet conditions. The forecast for Sunday was calling for more of the same.
We made plans to investigate a line we expected to ski well, even in marginal lighting.
As we skinned up the Manitoba mining road early Sunday morning, the clouds, despite the forecast, were peeling away, revealing that deep, Alaskan spring blue. As we hit our juncture and decision point, it was time to re-evaluate.
In March of 2013, both Cody and Nathan were on the injured list.
It was an emotional descent three years ago, first with Jack and Tony, and then going back a few days later with a big, fun crew; skiing a line I’d stared at and dreamed about for so long.
Conditions have not lined up since then to really make this peak worthy of a return. I actually had the summit on my list as a possible late summer or early fall scramble, just so I could have an excuse to go back.
But here it was, stable, deep, and blue bird.
The energy was high, the decision was made, let’s go.
I kind of love everything about the approach and climb of this mountain. It takes a while to get there, it’s lonely and quiet, abandoned remains of the area’s rich mining history haunt the route. We followed the tracks of a lone wolf in search of prey for much of the way, and a wolverine had put more tracks on the Soul Fire face then most skiers can dream of.
After 5 miles of approach, so begins the 3,000 foot ascent.
At one point, I had a laugh to myself, as I found I was experiencing deja vous, putting in kick turns exactly where I had three years prior. The big difference though, conditions this year were way deeper.
From the base upward, we were moving through over a foot of settled, heavy powder, sometimes more. Honestly, if surface conditions had been much deeper, the ski might have been a no go. The slope is too big, and sloughs have the potential to run big and disastrously on this face; worse yet, you can avoid them on the climb, only to fall prey on the descent.
The crux of the climb came in the upper third of the mountain where the secondary south ridge meets the true south ridge. The last time I made this ascent there was a bench that connected the two, and it was then possible to skin the entire length of the upper ridge, albeit with some exposure.
This year, the bench, and the ridge above, sported several massive wind bulges.
With a low-exposure boot alternative, we made the obvious choice over the first of these,  to attain the ridge proper.
We were presented with three more similar epic wind bulges. The first of these by far, sucked the most: booting wasn’t a good option, so we made a tenuous skin out onto the open slope and kicked in a turn to get back to the safety of the ridge.
There’s nothing like feeling 6 to 8 feet worth of resonance beneath your feet and 2,500 feet of mountain stretching below.
After that, we were able to work the ridge with a few cruxy style skinning moves and one more short steep boot.
From there, we hit the cruiser ridge that skins right to the last 30 feet of the summit cone; a short boot attains the final nub.
It’s amazing to think that such a tall and exposed place can hold so much soft snow.
From the tiny summit landing, the view was spectacular, with the Alaska Rage to the north in full view. High, hazy clouds to the south provided some extra nice lighting.
And then it was time to drop.
I’m just going to let the video and pictures do the rest of the talking. 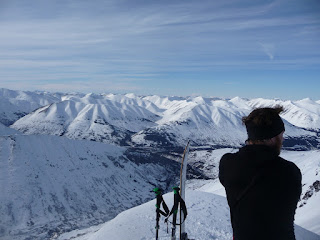 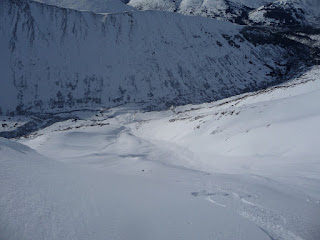 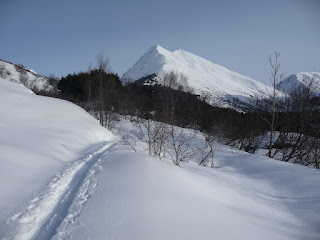