After last weekend’s visit to the summit of Spirit Walker, old interests in the high summits of Mills Creek were re-kindled.

Trent and I chatted mid-week, and as the weather began to shape up, the plan was made: overnight in Mills and ski one of the drainage’s big peaks.
There were two possible targets: Peak 54XX – Beluga/El Tercero, or Peak 52XX  – Stormy, see the end of this post for more information on naming and history in this area.
Our plan was to set up a lightweight camp, recon the north face of Stormy, and based on what we saw, pick a peak. Ideally, we would have stuck around for three days and tagged both, but that wasn’t an option this weekend. On board for the adventure was Nathan, Trent, and Tony.
The crew assembled and skied in, stomping in a cozy camp. Mills Creek Valley is kind of the bottom of a bucket, and only catches mid-day sun, even now at equinox, so we enjoyed a leisurely lunch and soaked up the sun’s rays, knowing it was going to be shady and cold when we returned later in the evening.

Part of the appeal to our campsite was direct access and an outstanding view of Stormy’s steep and tormented north face.

Adorned with massive overhanging cornices blocking access along nearly the entire summit ridge, cliffs and rock are more abundant then spines of snow on this face, and in the end, the run is cut a bit short by the dying Stormy glacier below.
I’ve got a pile of photos of Stormy taken over the years, and one thing was clear, it rarely sets up.
I had compared photos taken the prior weekend from Spirit Walker with photos I’d taken of Stormy in the good snow years of 2013 and 2010, and I knew even from the recent pictures, for once, there were some real leads.
In March of 2013, there was no conceivable way to ski off the summit of Stormy without doing some bogus stunt. There was way more rock showing that year too. The photo from 2010 was taken in mid-May, so some of the cornices had broken away revealing more potential entries, but even still, it was clear skiing onto the face was going to require a great deal of commitment.
From camp on Saturday though, the entry line was right there for all to see, standing out clear as could be, exactly what we hoped to see: a perfect but narrow snow ramp that dropped right off the summit ridge into the middle face.
Nathan was wise and brought binocs, so we were all able to get a good look at it.
The winds had backfilled a perhaps 20-foot wide section of the corniced ridgeline. On either side of the ramp, the cornices quickly grew back to unfathomable size.
We could see that we were going to face a very steep entry, but once off the ramp and into the meat of the line, there were a couple different chutes of varying size and character to choose from that all flowed steeply down another 700 feet or so to the glacier in a manageable manner.
With everything we needed to know about Stormy’s north perspective already answered, we decided to take a tour into Beluga’s unnamed drainage to have a look at the king peak of the Mills Creek drainage, and stomp in our route to the headwall that divides the connecting ridge of the two peaks.
We ended up touring right to the base of the valley’s headwall, getting a great look at Stormy’s crazily snow-ribbon-adorned southwest pinnacles, and Beluga’s giant north couloir.
The latter was very inspiring, and certainly tugged at the strings of wants versus cans.
The tour from camp to the base of the headwall was 4 miles and acquired about 2,000 feet of vert along the way.
It was too flat to justify boarding back out the valley, so Nathan and I joined our two-plank partners and we all partied back down to camp, seeing who could make the most Mike Wiegele FGP wiggles. It was good to see Beluga’s crown line up close having never been there before, but in retrospect, I’d probably forgo the full valley track stomp, and tag one of the dozens of enticing runs along the way. It was a riot nonetheless, and Nathan and I agreed we both hit our top speeds on split skis straight lining some of the steep moraines. At one point, all of us were cruising along right next to each other, not saying a word, just making little swish turns in the soft pow, and I turned to my right and watched Tony repeatedly dropping knee and throwing flumes of snow that caught the golden sunlight just right…it was pretty spectacular in the moment.
As the sun set back at camp, the north face of Stormy saw its first light of the day, the last glowing rays painting soft orange hues across the upper ridge, capturing our dreams before we all turned in. 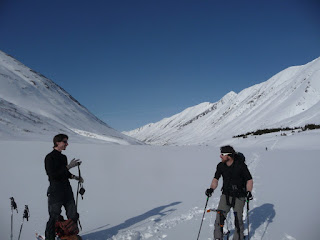 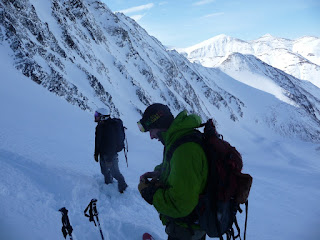 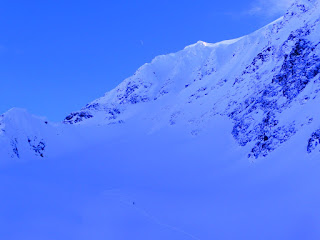 History and Naming
Tony, who has skied off Peak 54XX (Beluga/el Tercero), has referred to it as Beluga Peak. The steep, glaciated, bulging summit field that hangs suspended over the mountain’s big cliff face does indeed resemble a breaching beluga, and the name fits well.
A search through the Mountaineering Club’s Scree archives showed that fellow Vermonter and all-around badass Tim Kelly and a small crew had traversed the entire ridge east of Johnson Pass Trail starting in Moose Pass and ending at Silvertip Creek in a two-day run back in the summer of 2000. Along the way, they found cairns on Beluga’s summit, as well as cairns on the prominent summits south of Beluga. They also found a register on the summit of Peak 5010 (Caboose) just south of Beluga, that was signed by the Bludworth brothers, and dated to late July of 1969, a week or two after the two brothers had notched the first recorded climb on Bench Peak. The brothers were getting after it hard in the greater Johnson and Bench creek drainages that month.
According to the note in the register, the brothers had traversed from Moose Pass at least as far north as Beluga, which they called El Tercero. They named the three peaks to the south of Beluga/El Tercero: Caboose, Tender, and Engine/Locomotive, respectively, for the resemblance of the latter two peaks to a train and tender. The four peaks together were referred to as The Four Brothers.
When Tim and his crew continued on north of Beluga/El Tercero in 2000, they didn’t find a cairn on Peak 52XX (Stormy), nor any of the other high points along their route for that matter.
Peak 52XX is otherwise unnamed, but stands above Stormy Creek, and, amongst a small group of skiers, has taken the traditional name of otherwise unnamed peaks and ski aspects: Stormy Peak, after its drainage.
There’s a lot of history in the Mills Creek area going back to the turn of the last century and the mining boom that briefly bloated the population of the northern Kenai in the late 1890s, but so far, I have yet to dig up any specific references or tales from Stormy Creek or its history. It’s something of a chuckle to me though that timberline in Mills Creek is found not at Timberline Creek, but at Stormy Creek. It is quite likely that at the turn of the century, what are essentially just rock glaciers now in the eastern drainages of Mills, might have actually consisted of small but solid ice sheets. Perhaps timberline was lower then, and that would certainly have made a place like Stormy Creek fairly unattractive to miners, who were finding plentiful color farther downstream anyway. As it was, access to Summit Lake from the Hope/Sunrise area was quite the fiasco as late as the 1930s.
To an extent, for the middle Mills, it still is: Tim said there were no other entries in the register on Caboose when they passed by in 2000.
Posted by Dante at 11:37 PM