The irony of the name of this post didn't dawn on me until after I'd thought of it, but after an 11 and 1/4 hour day in the office, I closed out my day by loading a dead horse into a small pick-up.
Yes, that's right, after a long day wearing the loafers and collared shirt, interviewing local officials and jamming on a computer, what else says, "I live in Alaska," like going to help a co-worker and a few strangers push a big dead animal into a fairly small truck, so it can be butchered up and fed to a working dog team later this winter?
This has been a jam packed week, and I could post on a number of things, but obviously it's late now, and I'm going to have to be brief.
The main action this week stemmed from a murder, a high speed pursuit that lead police officers from three different departments from Sterling to just past my office in Kenai, the launch of the Tight Lines Fishing Section and my first ever online news broadcast, the discovery of a body in the Kenai Bluffs and the fact I have only a week before I take off for LA.
Wow.
For more information on any of the news stories visit the Clarion's Website. Click on the "View All Headlines" link below the list of Today's stories for the entire list.
To see yours truly delivering this week's fishing report online and in person visit the Tight Line's Website. That's a site you should put in your book marks and check back every Thursday through the summer. That's my job for the paper for the next several weeks, though obviously I won't be doing any reports while I'm in the Lower though, so after next week's, a colleague will fill in.
I better get to this dead horse thing too.
My coworker, Joseph, and his wife Colleen, keep a blog of their dog mushing endeavors and pursuits. Last winter Colleen competed in the Yukon Quest 1000-mile International Sled Dog Race. This year she's hoping to compete in the Iditarod.
To do either race, and run a kennel with over three dozen dogs, it takes a lot of protein, so they're signed up to be notified when moose are struck my cars or horses pass away and the owners wish to donate the meat.
In this case a pretty old looking beast had keeled over last night at a small farmstead in Sterling not far from camp.
The owners weren't home, and house sitting couple combined with Joseph and Colleen managed to pretty much get it into the back of Joseph's little Mazda, but needed one more set of hands to seal the deal.
The couple was really relieved when I showed up as it was looking like the horse might have to be quartered otherwise, something neither wanted to be around for.
I won't post more than a distant shot of driving down the road, and I'll leave it at the bottom so viewers not wishing to see it can skip it.
For those wanting more, check Colleen and Joesph's blog later this weekend or next week for some more pictures.
Despite it sounding like a gruesome task, everyone laughed the whole time, and I can't imagine an activity where perfect strangers could bond so quickly.
The last thing I wanted to hit on, before this gets long, and perhaps it already has, is that this is the last "winter" post, if you will.
Though winter is definitely over here on the Kenai, and has been happily for several weeks now, next week I'll be going to a single post a week format.
For obvious reason I'm not sure how much I'll be able to post after Thursday, I'll certainly try for at least one while I'm in Middlebury, but nothing promised.
When I return on June 15 I'll step back into camp life. Because my schedule is so hectic from Thursday through Saturday, the Thursday post will go away.
Since Sunday through Monday are my personal recovery days, I'll try and post on either one.
Consistency will no longer be a forte, however, I'd say in truth, it will be best to check the blog mid-day Tuesday for west coasters, later in the evening for east coasters.
When camp life is lax I may throw up a bonus or two here and there, but you'll catch it and I'll note it in my "regular" post.
I wanted to talk more about my experience blogging this winter, but perhaps I'll see what the weather does this weekend and consider that for Sunday.
See ya then. 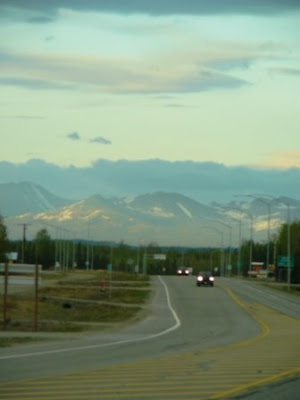 Here's a shot taken around 9:45 p.m on the Highway in Sterling this evening.


Ok, the next two shots are the horse, it's really not that bad, but I don't need to be responsible for upsetting anyone... 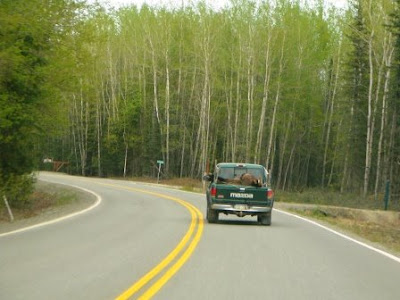 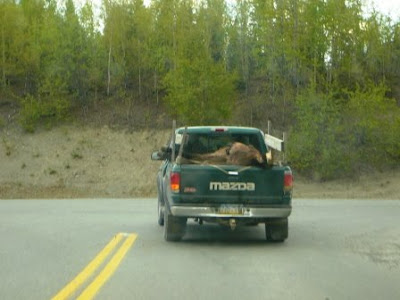