Welcome to the Sunday post.
Once the weather warmed enough to let me ride outside after work, I found I wasn't getting home until 8:30, and thus not able to get to the blog for at least another hour on Mondays. Since even a photo post with a few cut lines takes an hour, I was finding I had to make the tough decision of cutting my posts short or trim valuable hours of sleep out of my night every Monday.
Sleep always wins, and there's no point in posting to this thing only semi-conscious, so I decided to move the Monday post to Sundays.
The lord's day is usually a low key one. I escape the office a bit earlier, and opt for a light run instead of 2-3 hours in the saddle to mix things up a bit for the old workhorses.
Tonight I was supposed to do one of those short runs.
So much for that:
I was enjoying the sunny 70 degree evening jogging along a particularly nice stretch of road that drops down next to the river just around the bend from camp, but a little farther on foot, when I came across a pick-up truck, sunk to its axles, half in the ditch and half on the road.
The road cuts across a wetland and the culvert must be too small or plugged as water is backed up to the shoulder on one side making it real soft.
I've known about this for several weeks now, but the worst it does to me is sink my sneakers a bit.
I also noted a fissure that extended from the shoulder onto the travel lane maybe six inches and wondered if it would ever fail.
The lady driving the Silverado 1500 found out.
The road, being out of the way and having only a few inhabitants, meant she was pretty well hosed for getting help from a passerby.
Now I use the word hosed here for a reason.
When I approached the trucks window I was greeted with a sweet aroma I couldn't quite put my finger on; hang onto that thought.
The lady was phone less, very nervous and wanted to know if I had something to pull her out with.
There's no way the ole suby was yanking this gal out, and I don't jog with a cell, so I turned around and ran back up the road to a cluster of homes a few blocks away, going straight to to door of the home with gnarliest looking truck parked out front.
I found a guy named Gary, and like any Alaskan with a big ass truck, he dropped whatever it was he was doing on the spot when I told him a lady needed his rig to pull hers out.
If Alaska had to pick 3 universal favorite activities, I would wager a sizable portion of my pay on "rescuing each other from their own roads," making it on that list, right behind "shooting shit" and or course, "catching fish."
I digress.
When we returned to the scene of the accident, Gary and I hooked up the two trucks while the woman remained in the car, talking pretty frantically.
Now don't get me wrong, the view out the passenger window was a scary one, the rig was off at a pretty bad angle and I bet for a few terrifying fractions of a second she thought she was going to dunk it into the swamp.
However she also revealed that this wasn't her rig, and kept looking behind her back down the road saying, I'm glad I'm all the way around the corner.
The road was a dead end.
She also felt it important to inform me that, "the truck wasn't hot," then said something to the effect of it's a long story.
Sketch right.
Finally Gary and I got the rope squared off, and the lady asked me to drive the rig out, she didn't want to be in the cab for the next step.
I had to open the door, the thing was at such a steep angle she couldn't push it on her own.
As soon as I climbed in the whole puzzle came together.
That sweet aroma I couldn't quite put my finger on...sitting in the cup holder were two empty beer cozies.
Where there occupants had gone wasn't obvious, but the aroma of cheap beer hung in the cab like smoke in bar.
I had a little mini-debate in my head on whether we should actually get her truck out for her, but hardly had I dropped the gear box out of 4-lo and into neutral, was Gary tugging me out.
My focus was immediately concentrated on keeping the truck from finishing it's clockwise rotation and getting the submerged wheels back onto solid footing.
The lady did a dance that might have won her points on certain game shows but otherwise looked hilarious on the swampy road as the truck's front passenger wheel caught purchase and pulled the rest of the vehicle back up.
Saying thank you an uncountable number of times fast enough to nullify the meaning of the word, she hopped back in ready to get the hell out of where ever it was she was so glad couldn't see her.
Did I assist in the lifting of a truck, I have no idea. I'll just have to watch the court log I guess. So much for helping out huh? 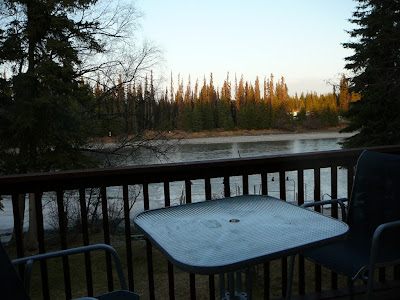 This post was born right here. Click to enlarge. Summer arrived late last week with highs in the 70's through the weekend. I know that sounds unimpressive, but try to remember that in all of last summer there was a week's worth of days where the thermometer made it that high. 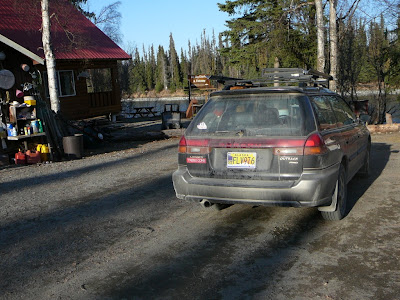 The Suby is officially Alaskan, I know finally right, it's only been like a year. The plates look good on her though.
I know, she needs a bath too.
Posted by Dante at 9:37 PM