Heavy snows and deep cold this winter caused havoc in the border town of Eagle in interior Ak this week.
Living on the shores of Kenai I was glad the river went out quietly this spring.
Flooding is bad news as it is, throw in icebergs the size of SUVs and you get all out obliteration. Photos and the stories from the Daily News-Miner sum up the situation far better than I ever could.
Eagle is over 600 road miles north east of Sterling, and sits just a few miles down stream from the Yukon River after it passes the Canadian border.
The reason I'm taking a moment to write a little bit about Eagle, a place I've never been to and probably won't ever in the future, is a connection I feel to it. 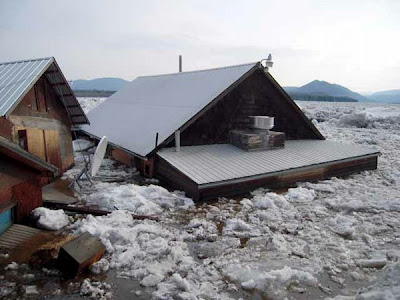 Yukon River ice spills over onto Front Street in Eagle, Alaska, on May 5, 2009. Taken from the newsminer.com.

Earlier this winter I read John McPhee's, Coming Into the Country.
McPhee spent several years in Alaska in the 70's when the state was going through a massive transition period of influxxing modernity caused by the development of the Alaska Pipeline. Meanwhile, the many old timers of the young state were reconsidering the decision to join the union as they found millions upon millions of acres of it being "locked up" in federal land.
McPhee spends time examining the many sides involved in the changes, including an entire section on living in Eagle.
McPhee doesn't talk about his experiences in Eagle however, he instead talks about its inhabitants. He does so by spending time in their homes, on the river and in the bush.
With words he literally brings the life of the town out of print and into your reading chair.
Reading the book, and having been raised in a small town, I soon felt like I too had spent a year of my life in the town of 70 something; that I'd come to know its inhabitants, and more importantly their plights, their dreams and their quirks like McPhee had.
This week, looking at the picture of the massive white chunks of ice sweeping away cabins and structures from like dust from a table, I couldn't help but feel my heart raise when I saw a quote from one of the character's McPhee wrote about, and then sink when another was quoted as saying that the town would never be the same.
As the days grow longer, the sun warms up more and life springs anew from the ground and sky, it's easy to forget what a difficult and harsh place this can be to live in.
Posted by Dante at 7:08 PM