Farther, muddier, harder, more bears and more epic Alaska backcountry mountain biking. I can't stay away from a good thing, so I headed right back to Resurrection Trail this weekend, this time with the intent of pushing about 13 miles in to Swan Lake.
I didn't take any pics from the trail head to Trout Lake other than one since things look pretty similar to last weekend, so see last weekend's post for those photos if you missed it.
The trail had hardend up quite a bit in the last week, and combined with not stopping for photos, I was able to make much better time to Trout, arriving 40 minutes faster. 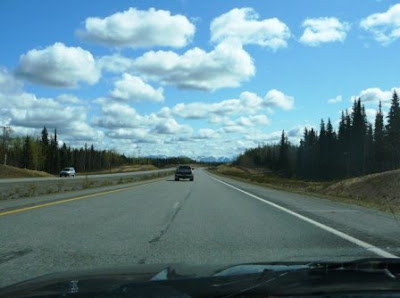 The top of the hill at the edge of Sterling headed into the hills. As was typical of life on the peninsula, clear skies in Sterling gave way to in-and-out rain showers in the mountains, but the sun made spotty appearances through my five and a half hour ride. 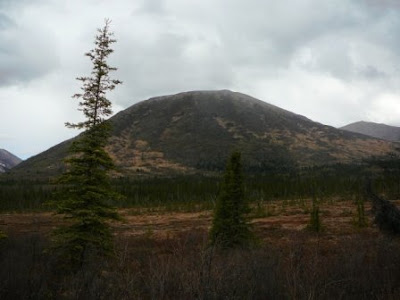 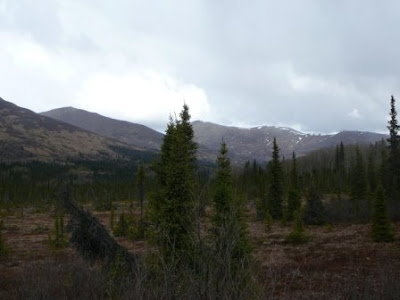 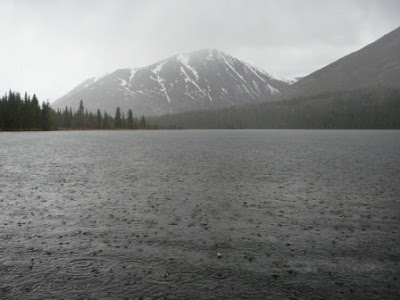 The trail hugs the steep sided shoreline of Juneau Lake. Just as I hit the lake, a hail/heavy rain shower broke out so I hunkered down under some stunted spruce growing on the bank, ate some food and waited it out. Resurrection Pass, like Turnagain, has different weather every 15 minutes, but with the right clothing and the right attitude it's more than comfortable.
A short clip of the rain and hail falling into Juneau Lake from my shore side shelter under a few stunted spruce. 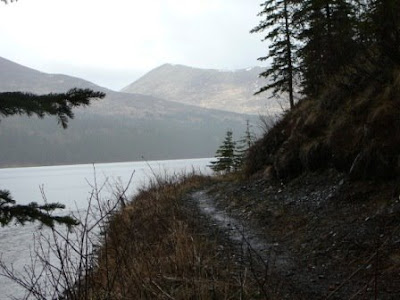 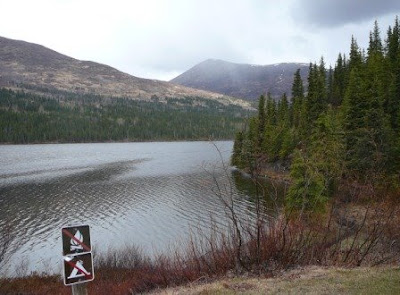 Back on my way, overlooking Juneau Lake from a Forest Service cabin's front yard. 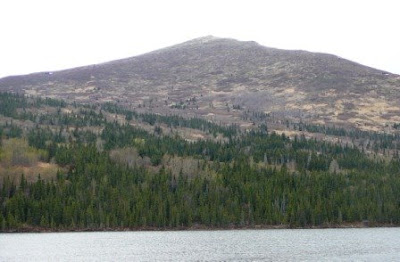 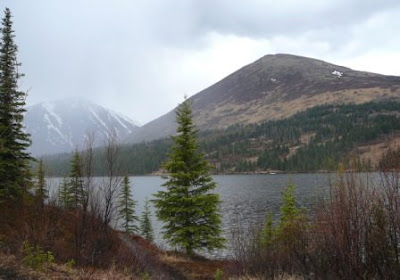 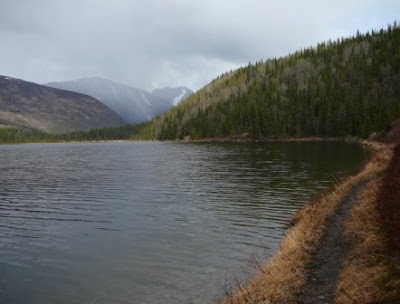 The Juneau Lake section of trail is a segment of single track every rider should hope and dream to ride once in their lifetime. 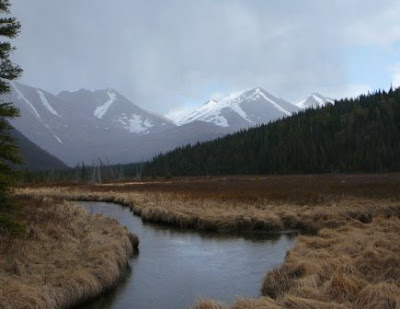 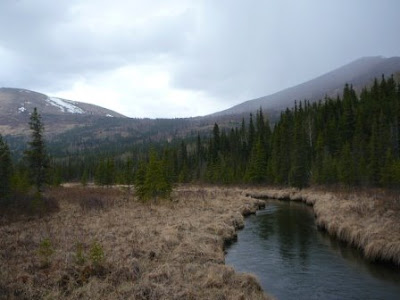 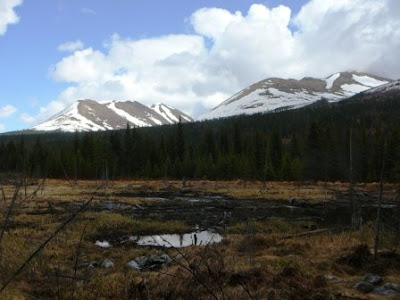 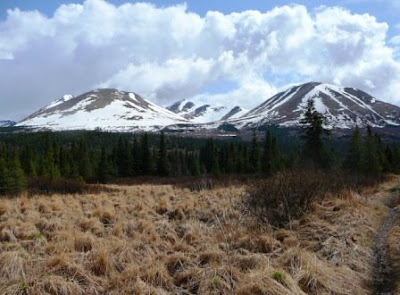 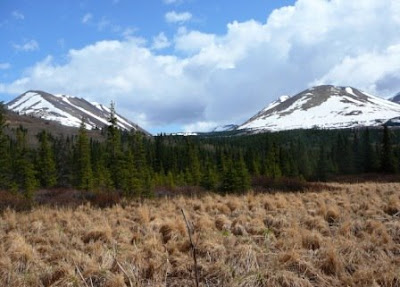 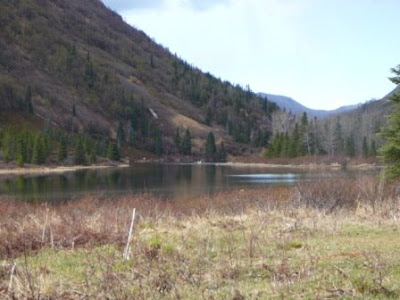 Swan Lake, a paddler rows the boat the Forest Service left on its shoreline into the mountains. One of the wild things about riding in Alaska that I guess I still haven't goten over yet, is that for every mile I ride, I'm usually one mile farther from civilization. When I stood on the shores of Swan Lake, I was about 10 miles from the nearest road as the crow flies, and that crow better know how to get some altitude as there's some pretty good sized mountains between it and a lonely stretch of the Seward Highway. Amazing still is that 10 miles is just a drop in the bucket by Alaska standards, but I can't think of anywhere else I've ever ridden where I could get that far away from everything. 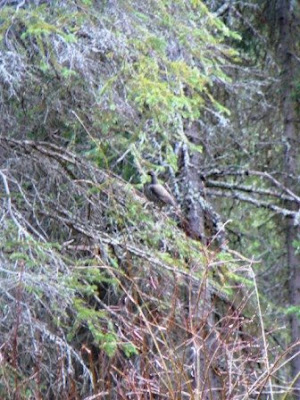 Spruce Grouse! This place is crawling with them right now it's awesome. I saw more birds than I could count and had one nearly fly in my face. I'm sure they'll be all gone when the hunting season reopens in late summer just to spite me, but I may bring a small pistol along on some fall rides. Once I passed Trout Lake the bear sign went out to wazoo as well. Last weekend I saw one set of black bear tracks, this week who even knows how many I saw of both black and brown. Most were old, but I did come across some fairly fresh scat near Swan Lake. I filled up on Way-Ohs! for breakfast though and made a lot of noise. 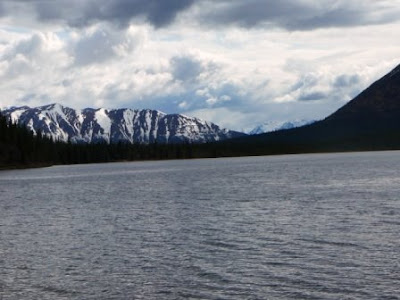 Heading back out, looking south from Juneau Lake. 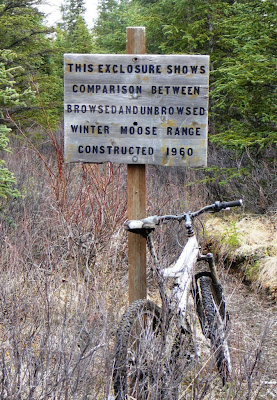 Biology lesson. Between Trout and Juneau Lake, a short spur trail leads to an ~one acre fenced in enclosure that shows the difference between browsed and unbrowsed vegetation. I climbed up the 50 year old rickety wooden ladder at the northwest corner of the enclosure and got atop the 10 foot fence to take these two pictures (click either to enlarge). The first is inside the enclosure, the second just feet from the fence. Inside, the willows have grown upwards of 20 feet high, and while they appear dense from above, notice that they're all centrally rooted. Movement within the enclosure would be nearly impossible however as the stalks grow so densely. Outside the enclosure, the willows are dense as well, but none make it much more than five feet high, and can still be waded through. The moose are so thorough they even trim the willows tips that try and grow through the fence. 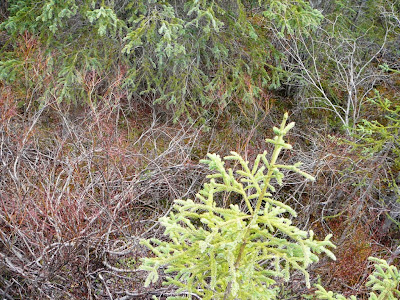 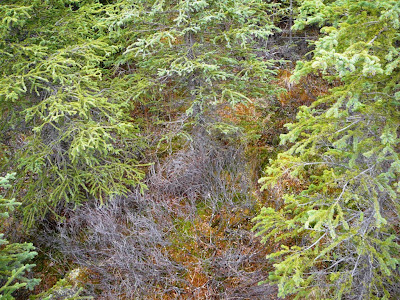 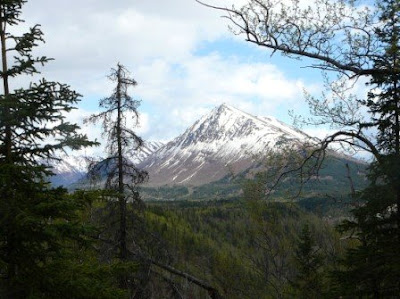 One last closing shot before I began the ripping decent back to the Sterling Highway. Notice the green line. Spring is still another week or two off from where I was riding in Resurrection, but Cooper Landing is looking bright and green.
Posted by Dante at 10:14 PM