This weekend, racing through the brilliant fall foliage on two knobby treaded tires, a friend told me I needed to get my priorities straight.
The situation momentarily caught me off guard.
I went back up to Anchorage on Thursday to bring my friend and former co-worker Matt to the airport. Matt was departing for the east coast for a little time off before starting a new job as a sports reporter in Hawaii.
Matt's announcement and pending departure for his equatorial leap has left me digging even deeper at a few prying questions about my own future; so much so in fact I awoke to a start one night a week or so ago convinced it was I who was making the leap.
Alas I've no such plans for the immediate future.
I suppose it's more than just Matt's decision however that has me realizing I have to make some of my own as well.
It's been almost a year now since I started working at the Clarion and essentially locked myself in for the winter up here, something I didn't intend for when I left in May '08.
It's obviously been pretty good, but it can definitely be tough.
The comment that spurred this post was made by my friend Tony and was entirely contextual and friendly in nature.
We were ripping along on a hammer fest of a ride (hence the lack of pictures) on the trails in Palmer.
Tony was doing his best to set the hook and get me to race in the 24-hour event held on the same trail system in June.
As I said to him, 'I'd love to, but late June is a busy time for me at fish camp.'
Part of the reason I took the job at fish camp was I felt it would force me away from the intensive amount of riding I was doing by my senior year.
That it certainly did.
Cleaning fish is a pretty intensive and doesn't leave me with a lot of time or energy for much else. This summer I was able to ride once a week from mid June to the third week of July. I didn't touch a bike again until late August.
Now though, the fall season is rapidly progressing, and I'm trying to squeeze in as much riding as possible before the snow starts to fly (any day).
This has left me wondering, do I want to do fish camp again? Clearly the break has done well by me. I feel completely recharged on riding.
Working at fish camp has given me far more than a needed break from pounding the pedals though.
It has let me explore new activities like skiing and hunting while I've learned more than I could have ever imagined about fishing. I have the priviledge of catching fish all summer that others will pay thousands of dollars for just a week.
In the meanwhile it's afforded me the chance to live up here essentially free of charge. I pay my rent for the year with 6 weeks of hard slimy work.
But that's not going to last forever either.
I can’t spend my summers cleaning fish and winters writing for cheap until the end of times.
As a result the wheels of change are in motion and I feel confident when I say that this time next year I’ll be in a different place or on track for a big change.
The specifics of those changes are fodder for another post though.
What was still unanswered as Tony and I buzzed in and out of single track and double track trails, was whether I’d be riding the race next June.
The result, very unlikely.
Yep, fish camp is hard sometimes, and it doesn’t let me ride much, and gosh I really do want to ride my bike more.
At the same time, I’m positive that in 5, in 10, in 30 years, I’m not going to look back and say, ‘Boy am I glad I gave up that one last summer I had to work at fish camp so I could ride my bicycle more.’
Somehow I have a good feeling that in 5, in 10, in 30 years I’m more likely to be thinking that I wish I could go back to fish camp. If you need furthur evidence of why, see the link below.
Non-face book users may view my summer fish camp photo album here.

Signs of the season Earlier and earlier sunsets, as seen from the hillside trails overlooking Anchorage on Saturday evening on my second ride of the day. 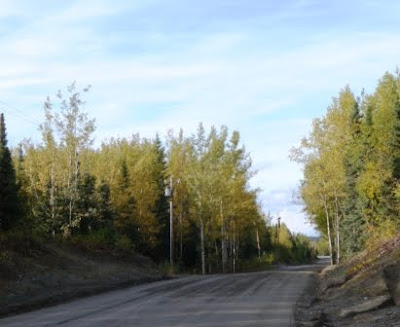 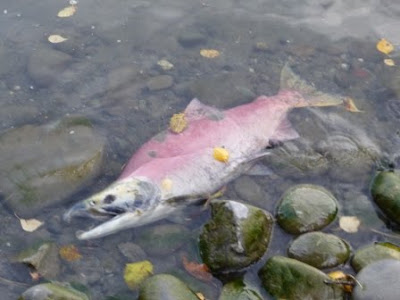 A dead spawned out sockeye beached in front of camp.
Posted by Dante at 9:10 PM