To Hope and back

To Hope and back, kind of epic sounding. Another title for this post might have been, "The full Resurrection." Also pretty out of this world.
Both are fitting.
On Saturday I went for it, and took off 40 miles one way on the bike from the Resurrection Trail Head in Cooper Landing north bound to Hope, no return shuttle.
The original plan was to go there and back, all on the trail, +/- 80 miles of Alaska backcountry single track riding through peak foliage.
While I made good time from Cooper Landing, climbing a little over about 15 miles with 2,200 feet of elevation gain to the pass in just under three hours, the 25 mile descent to the northern trail terminus took another two hours.
I found the north side of the pass was soaked compared to the very dry south. The trail itself is also rootier.
While 40 miles in five hours is pretty good on fat tires, it was 2:40 in the afternoon when I hit trail's end, and I knew the climb back up through the slop was going to be much slower.
I made a few mistakes on this trip.
First, I really should have started much earlier, I rolled out at 9:40 a.m., way too late to be trying to push such a big day this time of year. With the sun setting at 8:15, I knew I'd be just getting off the trail if I could make the same time on the way back, and that dusk period is a time of the day I also refer to as bear:30 around these parts.
More to the point, there was no way I was going to make the same time going back. The best advice I've ever been given about long rides is this: try to to envision yourself powered not by a truck motor, but a rechargeable battery.
It's 100% true, nurse your juice and use power wisely you'll go far, but eventually you'll drain. I was definitely more than half done when I hit the Hope side.
Second, the trail was slimy and with a low profile tread on my rear tire, I'd be spinning my wheel or chugging real slow, not to mention all the roots would be keeping my momentum down on any dry sections.
On top of all this, I needed water and had no purification tabs. Up high I don't worry about filling up from smaller streams I can see pouring out of steep gullies, but down low its a real crapshoot, no pun intended.
Going a few more miles down the road to Hope to fill up would guarantee a long climb back to the parking lot and an assured ride in the dark with the bruins.
The other thing that could seal the deal on that trek in the dark was the always possible mechanical, and looking at the coating of mud from the descent, I knew my chain would have plenty of time to slather itself in more clay muck on the upward slog. Bringing a sport bottle to fill with stream water and spray off the grime might have prevented that.
Maybe next weekend?
I had no choice but to hit the highway and take the road home.
While riding next to Anchorage-ants hauling arse through the mountains at mach-10 in their Ford and Chevy monster trucks is just as scary as being caught in the dark in bear country, not to mention longer mileage wise, I could make better time on the asphalt and knew I'd get back to the car before dark.
While the map below says the route is 90 miles, it quite clearly fails to take into account the switchbacks and contouring of the trail, and having done many a long ride, I'm comfortable saying this was a 100+ mile day, 40 trail, 60 road.
On the plus side to the highway ride, I got to see Hope. It would have been a real shame to ride all that way through so much country just to miss it.
I've never been to the little town, pop. 137, accessed by the Hope Highway which spurs off the Seward Highway between Turnagain and Summit Pass. The other pupular route to Hope is the the the Resurrection Trail.
Think about this, I've never visited this town, so I got on my bike and rode 40 miles through the backcountry over a mountain pass to get to it; where else can this happen?
Hope is one of the few places you could ride a bike past and never see if it weren't for the fact that the road ends. 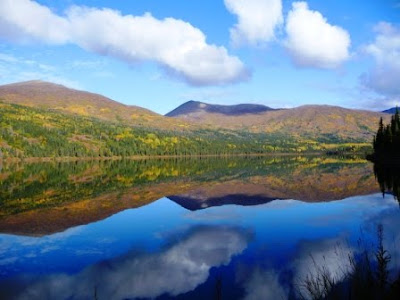 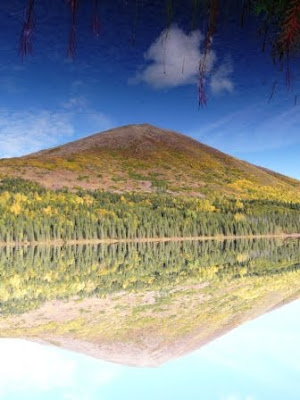 Weeds growing from the sky. To see how much the camera can wash out the sky, I rotated this shot 180 degrees. The reflection on the water's surface is certainly more reflective of reality. This is the only shot posted that's upside down, but I'm leaving it. 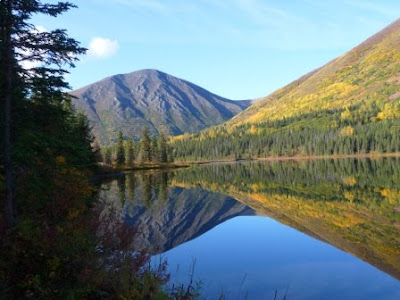 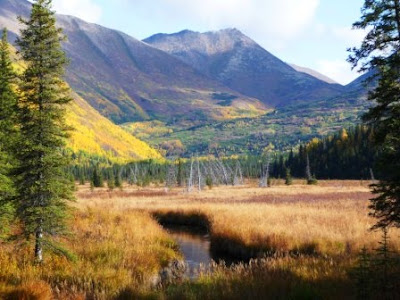 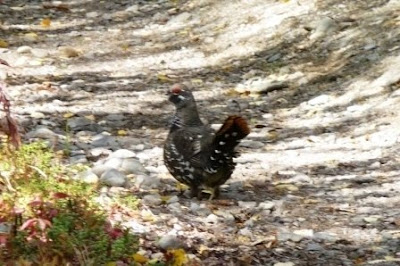 Spruce grouse. I saw over a dozen on the whole course, 10 in one five mile stretch. If I had a sure shot I could have brought home a bag limit. I may be back next weekend 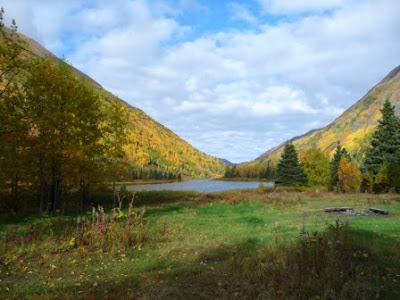 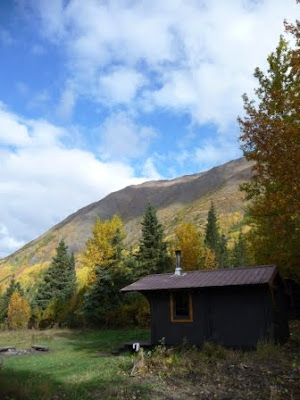 See anything interesting on that hillside? 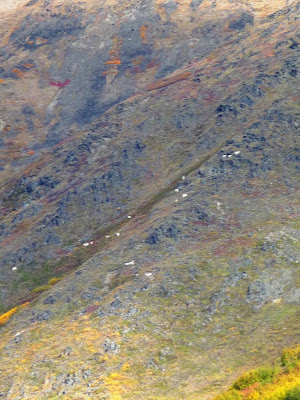 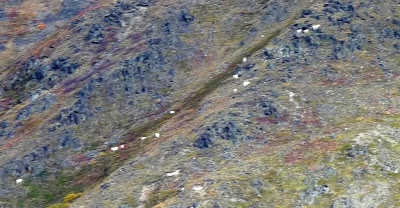 This is as good as it gets with a limited zoom, but the slope was covered in grazing sheep. Both pictures may be enlarged. 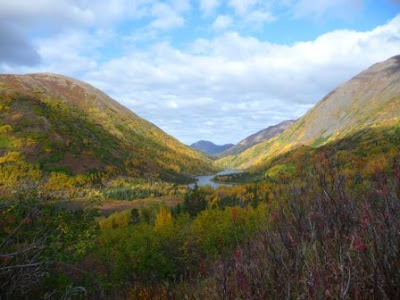 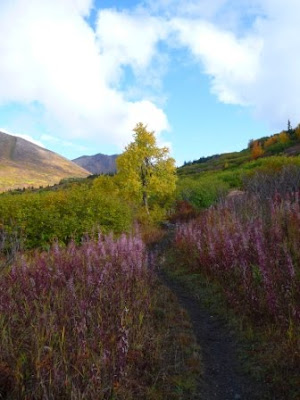 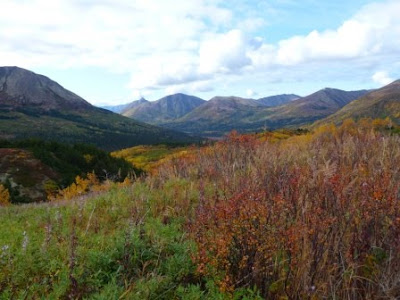 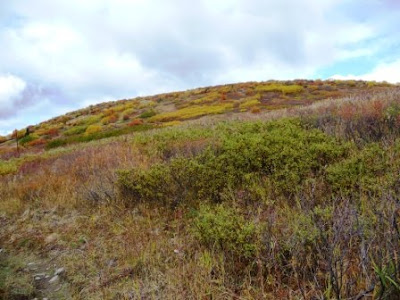 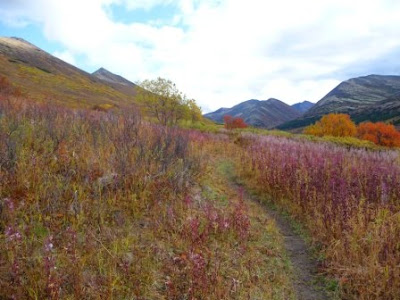 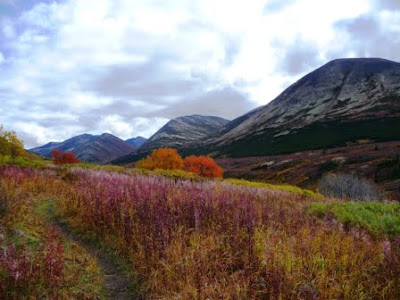 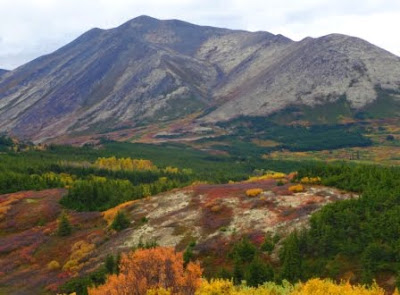 Check out the tie-die colored out wash at the base of that peak. 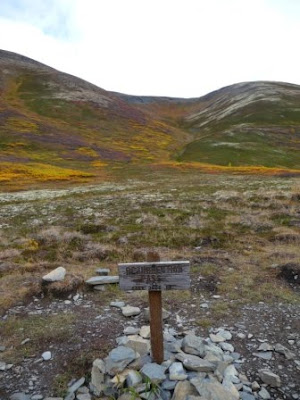 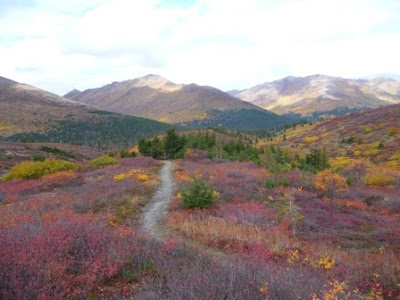 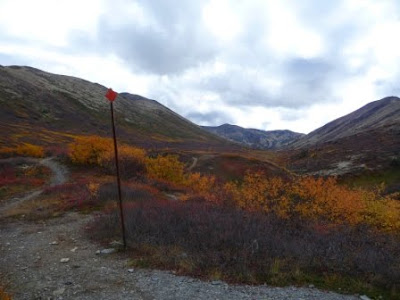 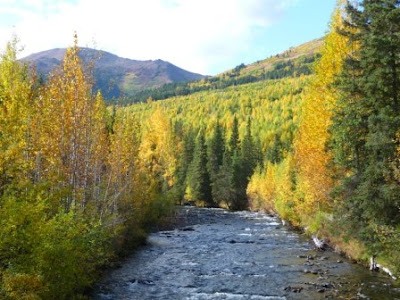 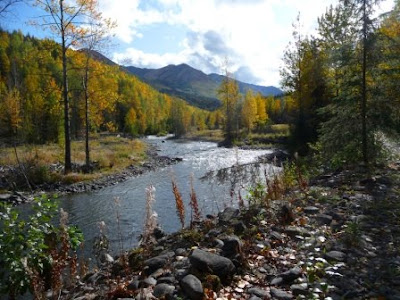 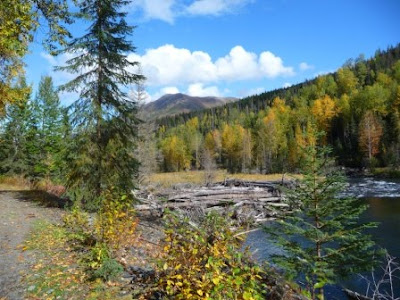 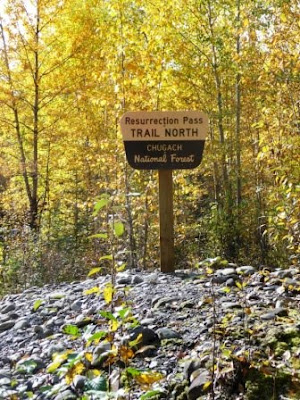 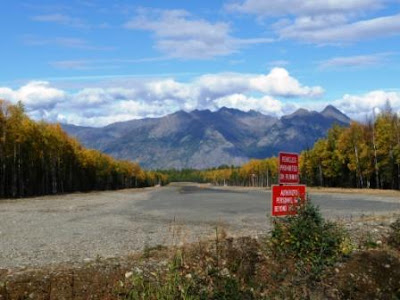 Hope airstrip. The mountains in the distance are on the other side of Cook Inlet.
Posted by Dante at 11:04 PM