Winter drifts in the cold fall winds and white coats on distant peaks tell of a frosty future.
There's still much to do before the cold sets its teeth over this place, and with the weather looking foul on Thursday evening, I pulled two smoker loads worth of mostly silver and some sockeye to smoke this weekend.
I'd never smoked any meats before I moved here, but it seemed like something I might enjoy both doing and eating, so I gave it a try my first summer and found I was right.
More, Joe really enjoyed the product, and not paying rent and all, I figured it was a small way to repay the favor.
I like smoking this time of year, after the last of the salmon have come in and the freezers are humming and full, its a nice way to feel reconnected to all the work of the months gone by.
While I much prefer a piece of fresh salmon on the grill, there's nothing like reaching into my pack on a long day in the saddle or on the board for a smoked salmon and cream cheese on a bagel for a mega calorie and morale boost.
Here's how I smoke my salmon, the pictures are not from this weekend, but sometime last fall.

The ingredients call for the obvious, fish, and a brine mixture consisting of kosher salt, dark brown sugar and garlic. 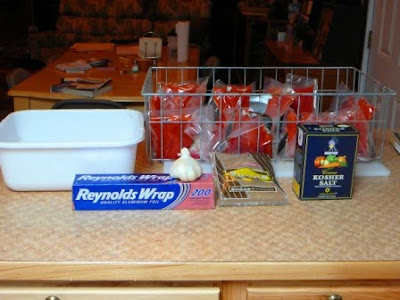 Usually I try and shoot for one smoker load of fish, but it's a pretty arbitrary measure. This weekend I was looking to get a lot done so I pulled a bunch.
I much prefer to smoke tail meat for two reasons. The tail meat is tough and dries easily when grilled, it's just not as good as the shoulder cuts. Since smoked meat is inherently dry and tough, it makes sense right? Additionally there are no pin bones, tiny bones that point off at an upward angle from the spine on either side of the fish. They're a real pain to remove, but when plucked make for a cleaner product.
I usually like to pull the fish the night before or in the morning so it's thawed by dinner. After, I'll begin preparing the cuts. 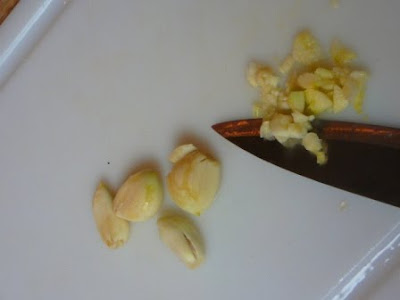 I'll take care of the garlic first, chopping it finely. 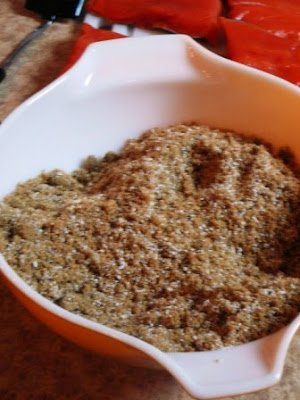 The garlic is added to a dry brine of sugar and salt. I've tried several different proportions ranging from 1 part salt, two parts sugar (very salty fish) to 1 part salt, 4 part sugar, fairly sweet. This past weekend I did a 1:3 proportion. I do about three pieces of garlic per cup of salt. 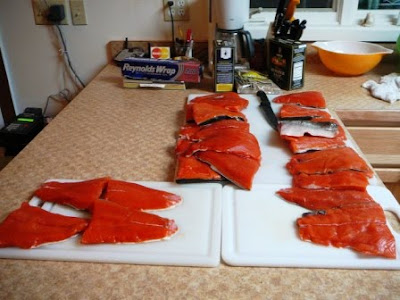 Then I sort and organize my cuts by small medium and large pieces. This is important for placement in the smoker. 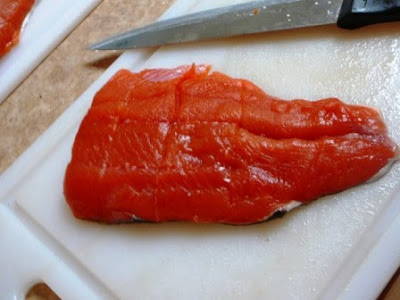 The pieces are cut into candy bar sized vertical strips that go through the meat but not the skin. 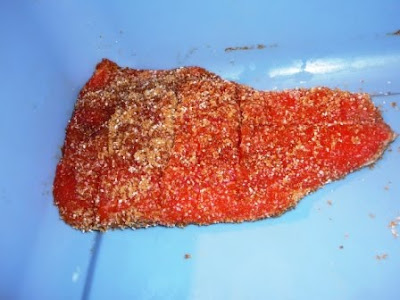 Each piece of meat is coated in the brine mixture on both sides, making sure the to get in between the strips. 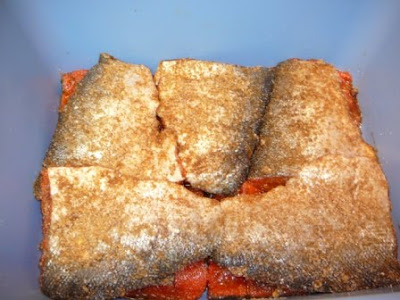 The cuts are laid out in a plastic or ceramic, though never metal, container, skin to skin, flesh to flesh, three or four deep. The containers are covered and stored in a cool place for 12 hours or more. You cans see already timing is everything. If the preparation is started at night, the fish will be ready in the morning. 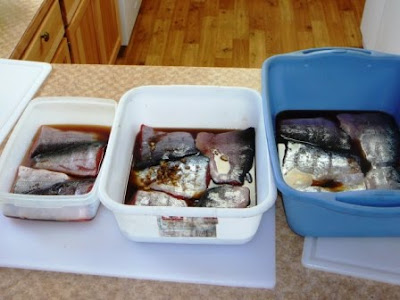 Almost immediately, the brine begins to draw the juices out of the fish, making a dark syrupy liquid that surrounds the fish. After 12 hours the meat is removed and gently but thoroughly rinsed. I usually prefer to do this outside at my cleaning table where I don't have to worry about making a sticky mess. 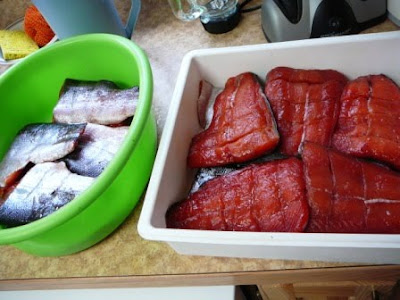 All rinsed and clean. 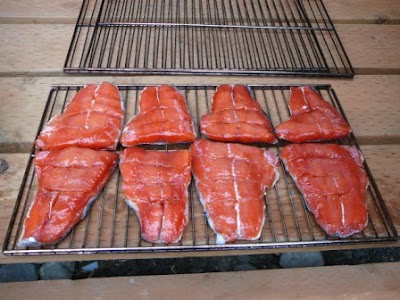 The cuts are then laid out on the smoking racks. This is where the size organization comes in. It helps to keep the bigger pieces together so they can all go on the bottom where the heat will be strongest, while the smallest pieces go up high where it's coolest. I prefer, if not packed tightly, to keep the tails pointed outward as well, as the edges of the smoker are often cooler and will be less likely to get crisped if done this way. 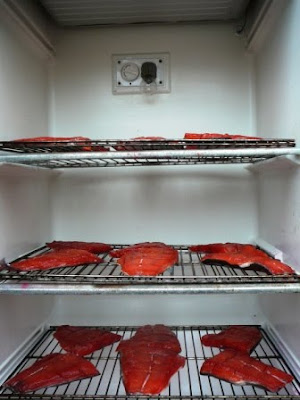 Once laid out the meat needs to be left in a cool dry place for at least an hour to an hour and a half to air dry. When the meat's ready it will have a tacky feel to it when touched with a finger. 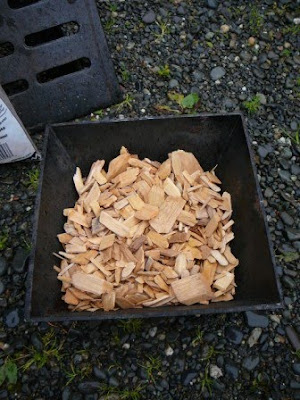 After a half hour to 45 minutes of air drying I get the smoker going. I start with a wood chip mixture. For salmon I'm a big fan of a 3/4 inch layer of hickory for its richer flavor, blended with about two and a half inches of alder, which makes for a clean crisp flavored smoke.
I fire the smoker up on high and run it for about a half and hour with nothing in it. It takes about 10 minutes before it even gets the chips going, and then gets dark and foul.
After 30 minutes the smoke will be clean. That's when I put the racks of fish in. 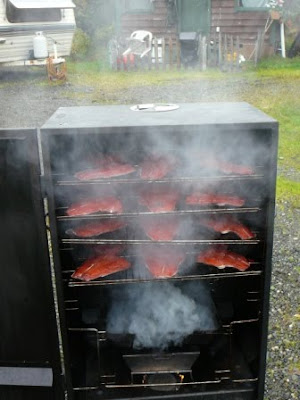 Water is added to a pan above the chips to make steam, which helps the smoke penetrate into the meat I think. 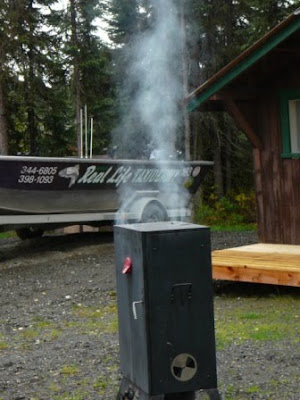 With the fish in I close things up and sit and watch until the smoker is holding steady at 200 degrees. Depending on the wind and the weather, it may take several adjustments of the knob and the vents to get this right and the smoker is sluggish to respond, so I pull up a chair.
After that I let it go for an hour and a half after the fish initially went in. At that point I take a look and make sure nothings burning. If the fish needs more time then such is the case. Usually two hours total does the trick.
For much of the time the fish is smoking there won't actually be smoke, which is fine. Think how quickly and how permeating the smell of wood smoke is when near a camp fire. The meat only needs a little, the rest is sealing that flavor in. 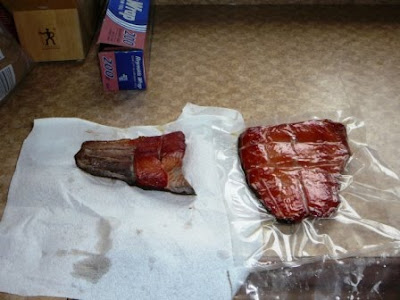 I usually kill the smoker and let the meat cool for 20 minutes, then vac pac and freeze it right away. Usually one piece just ends up being a piece of skin by the time I finish, strange how that happens.
Posted by Dante at 10:51 PM

Dante, I think you have the smoking "program" down pat.
Kyle and I will try your system.
Sounds really good.
Jim Leland
See you next year.

Thanks for this system. I was getting ready to cure some of the fish you sent me, and the process seems similar to the first part of your smoking system, although it takes a bit longer. I'll let you know how it turns out!

That looks tasty, Ill have to send some fish to laurens dad so that he can smoke some for us. fall is coming quick here. the temp are going into the 35-40 range at night The morning are clean and crisp. Some smoked salmon would make a nice treat during the day.
Scott-