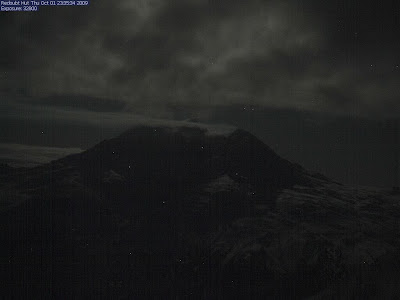 The slumbering giant in the night appears so peaceful, seen from AVO's Redoubt Hut, approximately 7.5 mi from Redoubt's summit crater. (click to enlarge)
Posted by Dante at 10:09 PM

Sorry to hear that that particularly fertile story has dried up for you, but I remain envious of the diversity of stories you get to cover up there.

P.S. I tried to serve some King at Jamie's birthday dinner last night -- some of the guests turned their noses up at the "fishy taste." Ingrates.

And isn't fish supposed to taste like fish anyway?