"Where else can you watch eagles lock talons and free fall, see an erupting volcano and ski some of the best snow of the season in the bright warm sun on an April morning?" -Justin
True life in rugged Alaska.
I live a tough life up here, just so stressful sometimes its amazing I even wake up in the morning. To break the tension I like to "get away from it all," which in a place like this, is tough, but you do what you can.
Friday was pretty gross -- really -- windy, snowy, not good for much, so I decompressed a little. Saturday I woke up to bright blue skies and a volcano spewing ash on the southern peninsula. So much for getting one last skate in on the Homer trails.
I went over to the Tsalteshi after a light breakfast and skated for an hour on the freshly groomed snow that fell the night before while temps climbed into the lower 30s.
I eventually caught up with a couple other skiers and Bill, the groomer.
Hopefully before spring really kicks in here, I'll learn to drive one of the snowmachine groomers so next season I can pull some shifts keeping the trails in shape. 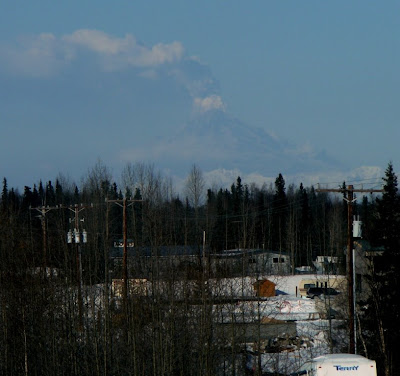 The view of Redoubt from just outside Soldotna a few hours after it popped Saturday morning.(click to enlarge).

After the snow got sticky a few other skiers and I talked up how tough we had it.
I headed back to the lodge, had a quick lunch, and threw together some hiking gear before departing for the Skyline Trail head.
I haven't been to the top of Skyline in about six months, and I decided it was time to bag another peak.
The Kenai Front Range doesn't get a lot of snow, and the peak to the west of the trail gets a lot of sun and wind, so I decided to go nail it and see what kind of views it offered of the volcano. 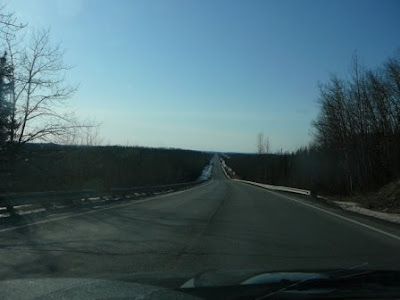 Obviously on such a nice day, everyone else wanted to get out of the big cities of Slowdotna and Kenai, and it was bumper to bumper the whole way out of the city. Oh my god, look at the ashhole on my tail, he might just as well park in the back of my car! Crazy traffic, it never ends. 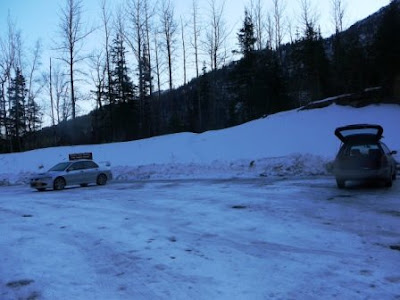 I was lucky to squeeze into the parking lot at the trail head. People everywhere. They're going to have to build a new bigger lot I think, like Wal-Mart sized lot. Heck, they ought to just build a Wal-Mart at the trail head so I can do my shopping while I wait in line to get on the trail. 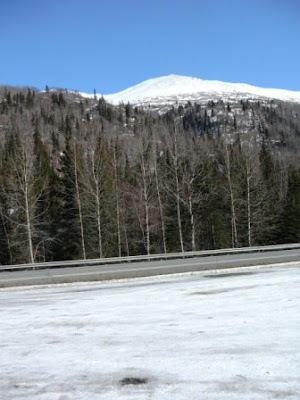 From the trail head. 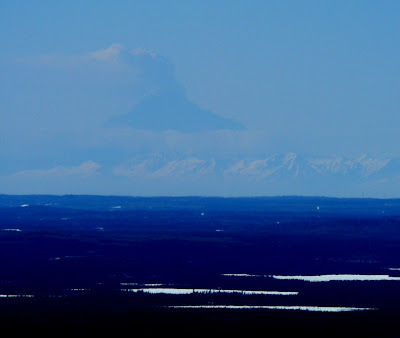 Redoubt viewed from the trail. 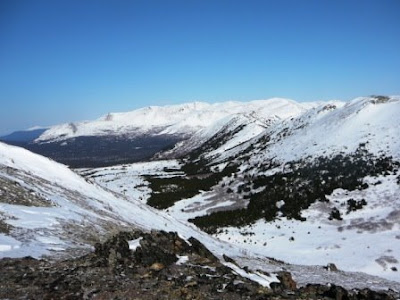 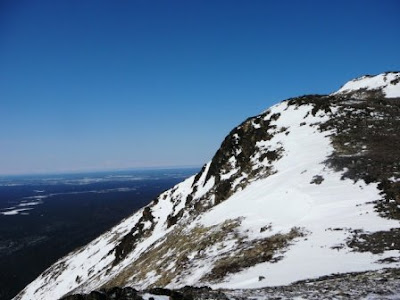 I sort of used my equipment in reverse to summit. I was able to bare boot a little ways, but overflow left sections of the trail covered in sheet ice so I strapped on the crampons. I'd forgotten how awesome it is to wear a spikes. Just below the col where the trail ends, I put on the snow shoes and climbed to the summit crest, before snow cover thinned out to nothing but a few little drifts, bare booting the rest of the way to the top. 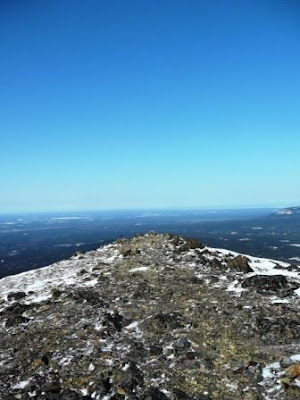 Ripping wind and a 360 pan from the summit. 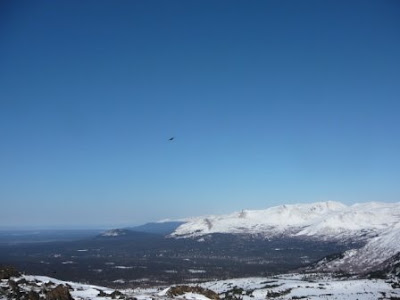 After summiting in about an hour and a half I walked back down into the lee side and crashed into some bare tundra for a little siesta. Sometimes I just try and imagine what this place would have looked like fore all the people got here...wait 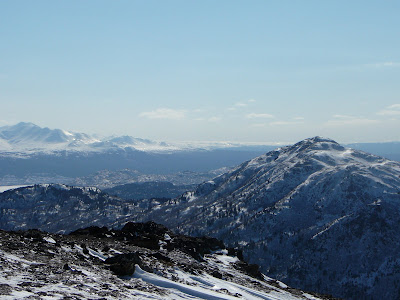 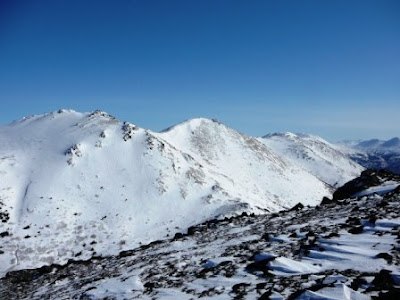 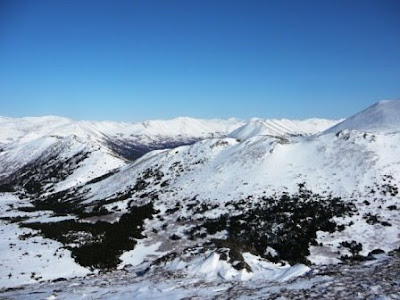 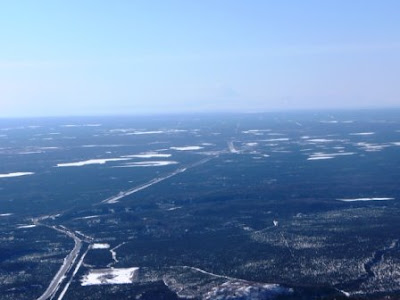 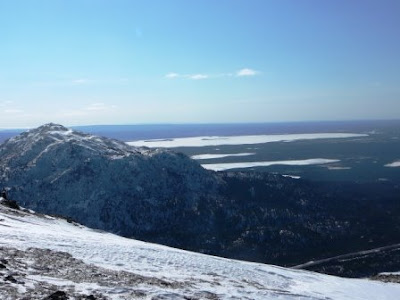 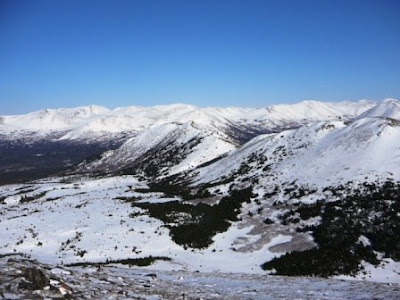 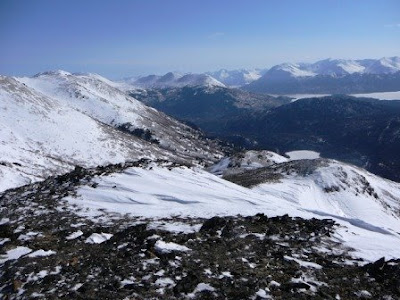 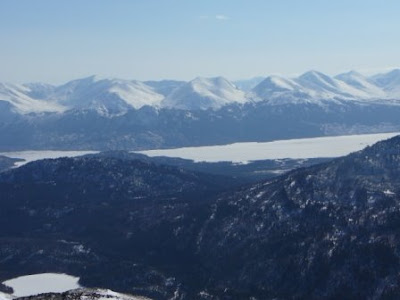 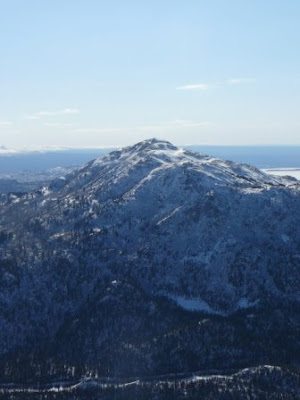 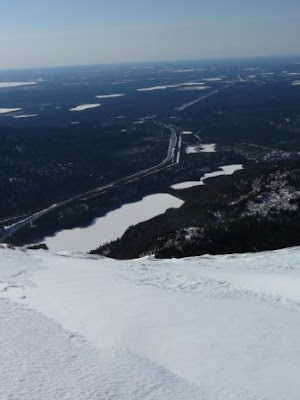 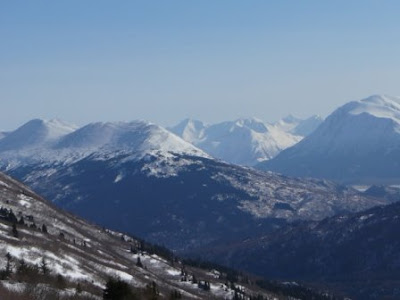 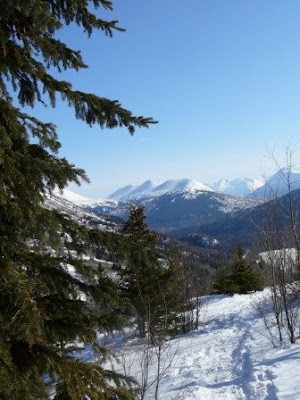 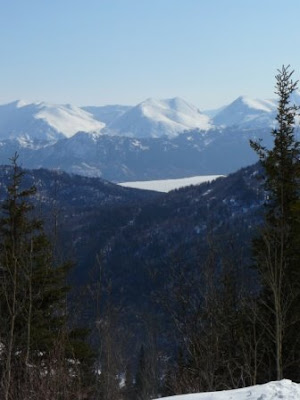 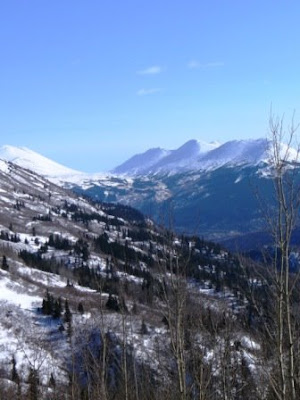 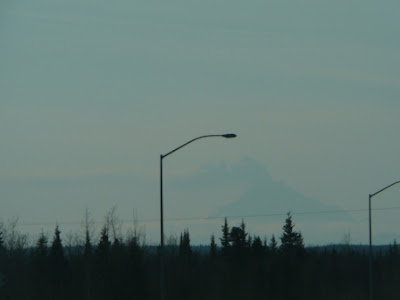 A hazy view of Redoubt from Sterling on Saturday afternoon. The emission of sulfur dioxide, carbon dioxide and tons of particulate matter leaves a familiar east coast summer haze over the peninsula these days.
Posted by Dante at 9:25 PM