Last night I was captured in sleep by one of those extremely vivid dreams. I was skiing trails I knew well on a full moon night, conditions were windless, the sky cloudless, the snow fast and firm.
I dreamt however, that the snow would all melt at sun up, and I'd never see conditions this good again for months to come. When i finished my long lap around the trails I was inclined to keep skiing through the rest of the night knowing what awaited the next day.

With the end of every season comes a bitter sweet time of looking back and looking ahead.
Of course, with snow still on the ground, I'm still on the skis on the weekend "harvesting corn," soaking up the extended rays and enjoying warmer weather, at least by Alaska standards.
All the same the riding season is in full swing as noted by my earlier post, consuming my energies, both physical and mental. Typically I've shifted out of my winter routine at the beginning of March. The obvious length of Alaska's winters, paired with my new found love for skate skiing, lead me to extend my season into April this year.
I could have pushed it farther too I suppose, but at some point summer will show itself and I'll be glad I've got some base miles on the bike.
That being said, looking back is sometimes easier than looking ahead.
This was a banner year for XC skiing and me.
I said that of last winter too, that's true, and it was.
What came out of last winter however, was that I wanted to be a better, stronger, faster XC skier.
I was pretty sure this time last year however, that was just a pipe dream.
In the four years I lived in Saratoga, my final one was the only year the area had consistent snow coverage through the whole season.
East coast skiing I think is also more supportive of classic technique.
One thing that came out of last season as well was that I wanted to learn to skate ski.
Doing so would have been far more difficult on the icy Saratoga trails, and perhaps I would have had a chance closer to home in Middlebury with two ski areas nearby, but the Tsalteshi are groomed by a skate skier and skied mostly by skate skiers.
The track is set when conditions permit, but in the six month season that wasn't all that often.
I forced myself through the painful beginnings of learning a new sport.
I almost quit when my shins burnt to the core, when I felt like vomiting because from going full bore everywhere since that's all I knew, and yet for all the energy I blew with poor technique, I was destroyed after only a short distance.
A daily internal argument ensued each evening at the trail head convincing myself not to just hop on classic skis, on which I could go much farther and for a while, faster.
I didn't appreciate having the temperature dive a few degrees and make my wax job worthless either. On Monday conditions could be amazing and I could ski a loop effortlessly, only to have a new layer of snow and a new storm system push through and make the same loop a living hell.
I could have just rode a bike in a trainer each night; it would have been warmer, easier and more consistent.
I knew nothing, but just doing what felt right, slowly building up muscles that had never been used before, but just kept going each day after work.
In the process I became more proficient at dressing for the varying degrees of cold, learning to get a full workout down to negative 27 degrees.
By the end of December I was skiing faster on skates than I could on classics, at the end of January I found I could finally ski longer more satisfying distance before burning out, and by the end of February signed up for two races.
Suffice to say, my results in the races are still a source of pride and something I never could have imagined in the beginning of the season.
So now reflecting on on my achievements from the winter, and knowing that I could still in fact be coasting on the snow after work instead of taking a literal and figurative gritfull of sand in the face on a road bike, is a little tough.
At the same time, I've always said, whether for the summer or winter, the best thing you can do is leave a season with a sweet taste in your mouth, ready to go back for more in a few months.
I'll probably squeeze just a few more skates out of the year while I'm at it as well, like say, about the time most my east coast readers are wrapping up lunch Friday. 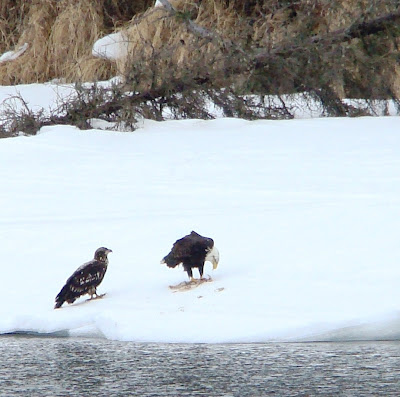 On Tuesday morning as I headed out the door I noticed an eagle flapping about in the water on the other side of the river. At first I thought it might be injured, but quickly realized it was probably up to something and grabbed some binoculars. Sure enough the bird pulled what I'm pretty sure was a duck out.
Ducks have been hanging out in the open water in the slack eddies of shore ice since breakup, and the hapless fowl are easy targets above for the famished raptors. I used Joe's camera with a better zoom and higher resolution, but even so it was a distant shot, this is about as good as it got.
Posted by Dante at 8:34 PM