With the weather only moderately cooperating so far, I'm now into my third week on the bike and equally, off the skate.
I'll talk more about the transition later this week, but for today I thought I'd share a story from my ride Friday, which from its getgo, looked to be one of the most comfortable road rides I was set go on this year.
In an event rarer than a 70 degree day, there was almost no wind.
Additionally, the thermometer in camp read a whopping 45 degrees.
Though dressed in more layers than my riding buddies in the Lower, I felt scantily clad with knee warmers in place of tights and arm warmers in place of a thermal and a long sleeve jersey. A typical peninsula rain was typically falling, and then not, and then falling, but in these parts, such rain is "dry."
I had to start my ride by hiking out of course.
Although Greatland St. is largely broken up and ice free, the driveway is still locked up in the winter's wrath.
Making it up the hill in cycling shoes on ice requires an interesting climbing technique where I put all my weight back on my heel, the only part of my shoe with any traction.
I made it up with no backward flips, bounced down my road through the glacial melt filled potholes and hit the highway west toward Soldotna.
Everything was looking good for the first 15-20 miles or so.
Then summer ended.
The Kenai Gods, struck with rage at the sight of my exposed pasty white flesh, unleased their fury.
Down came the mercury and the white stuff.
The temperature took a 10 degree dive and light snow started coming down.
Perfect I said, I love riding my road bike in a light snow, it adds flavor to the ride and makes them memorable in that way. Plus, you know, it's badass.
I smiled for a second, thinking, "This is the definition of early season road riding in Ak."
Then I suppressed an afterthought that went, "This is the definition of time to go home, things are about to turn sour."
Light snow became steady snow after a few minutes, soon morphing into white out conditions.
I hooked back up onto the highway heading back to camp, but as I came to the juncture of the beginning of a ~ 10 mile loop, the cold must have got to me; I turned off.
I think I figured that with the poor visibility, I'd be a little safer off the main drag.
Maybe I thought the added half hour plus of exposure would put some hair on my chest too. Wait, I’ve got enough as is, hmm.
At the very least I decided, the snow wasn't sticking yet, and that's the only thing that could have made the ride even more ridiculous.
Oh, guess what? The gods listened.
A mile or two later, the biggest flakes I've ever seen started tumbling out of the sky.
These things were albino Sumatran Jungle Moths tumbling out of the heavens.
When I caught a flake in the face, it easily covered an entire lens, giving a new definition to the term white out. 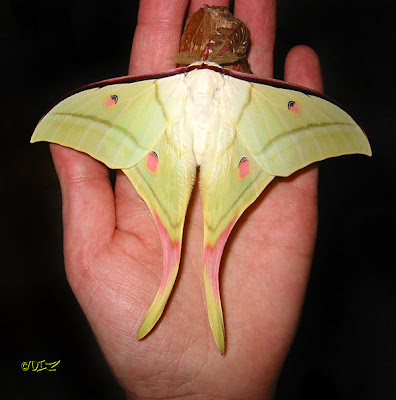 This is what the snowflakes I was riding through looked like, except, white. www.dannesdjur.com

With such big flakes falling this intensely, snow started sticking while my tires did the opposite. Additionaly up to an inch of snow/sluch/ice hung onto my helmet, the front of my bike and exposed skin.
My uncovered shins turned a deep shade of hot pink - nothing like frost nip.
I went into survival ride mode, firmly agreed with myself that this would be a ride to remember if I could ride out, and bailed; numb in all senses of the word.
The stares I got from passing motorists were priceless however.
As an extended ending to my little winter outing, I cast aside all that I know about cold weather care and jumped into a piping hot shower just the second I made it in the door. In about 30 seconds my legs started to itch so severely I thought I was going to cry when suddenly I realized I was burning myself but was too numb to tell. 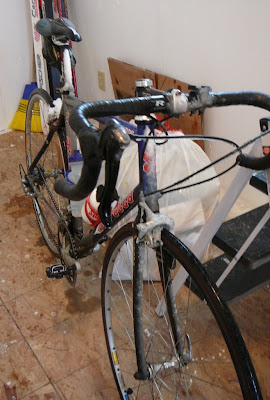 My bike doesn't have any white on any of its components. Ice, already starting to melt off, clings to the entire front from the bottom the the fork up to the head tube, while even more sticks to the seat post and rear brake. 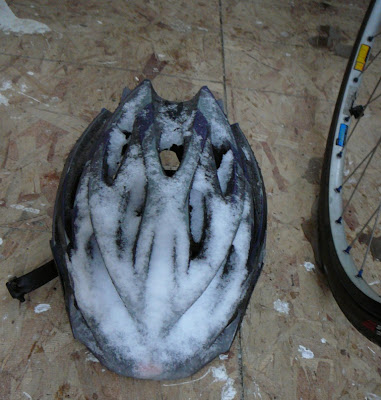 Good thing I have lots of vent holes in my helmet to fill up.
Posted by Dante at 10:13 PM

These are what we call "character building" days Dante.

Much respect for getting out there and giving it a go.