The people that live here

I dropped the ball on my ride Friday to Crescent Lake. It's been a year since I last made it up there, and this time I was excited to take a few photos as I forgot my camera last time.
I forgot the battery. Oops.
We had some pretty wild weather this weekend with winds gusting to 90 mph in Turnagain Arm and the mountains. Temps warmed to the 60s and the air felt dense and tropical with moisture jetted north from the south pacific.
The narrow Crescent Lake was a frothing bath, with waves over a foot high pounding into the shore like an incoming tide.
By Saturday morning the bulk of the storm had passed and though it looked like blue hell in the sky in almost every direction, I went for a ride on Mystery Creek Road.

MCR, a primitive dirt road with few bridges, lots of mud and pond sized puddles, runs north from the Sterling Highway along the base of the Kenai Mountains, connecting with the Enstar natural gas pipeline right of way and continuing on to Chickaloon Bay, 40 some odd miles from anything to the south, but only a few miles from Anchorage on the other side of Turnagain Arm.
It's strange country.
On the one hand, its incredibly remote. When's the last time you were legitimately over 20 miles from anything but your car?
On the other hand, MCR is opened up every fall to public access chiefly for hunters, but anyone with the vehicular means can use the road.
In the winter, when enough snow falls, it's opened for snow machiners.
This means that this lonesome place is accessible to anyone with four-wheel drive or a snowmachine. Both are pretty common in these parts.
In truth, MCR is really only drivable by a stock 4x4 for about the first 15 miles or so. After that there's a few mud pits and stream crosses that you don't want to be messing around with in your average grain-fed urban SUV.
The first 10 mile are, in good weather, even accessible with my car, if you don't mind a little mud. I don't, thank you.
What this all means though, is even though your way out, there's signs of people, and with that idiocy everywhere.
Crumpled cans, beer packaging and even piles of human feces swaddled in toilet paper were more common than animal tracks.
More on this behavior later.

I drove about 10 miles out and parked at a side trail that leads to an airstrip before hopping on my hard tail.
I saw one truck near the highway and didn't see a single person for the next two and a half hours as I made it closer to Anchorage than home. 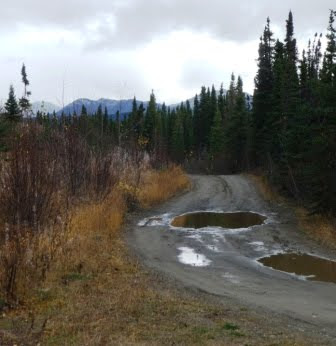 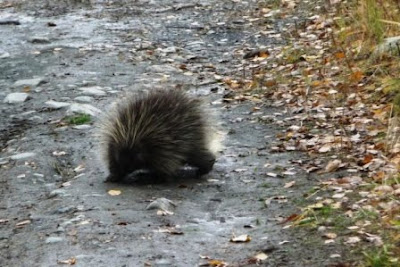 After an hour I came to an overlook where I could see the Alaska Range in the distance. That was good enough. 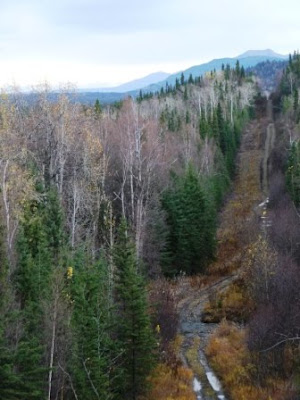 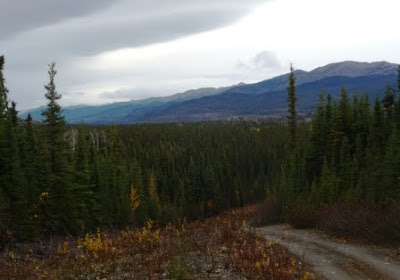 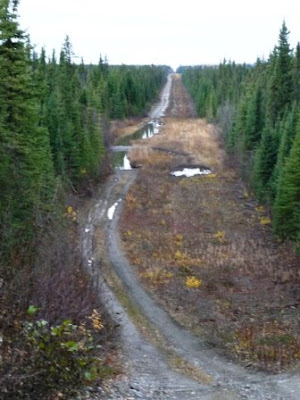 Long sections of the trail look like this. The mud hole in the foreground is about 3 feet deep and has a 1 foot diameter culvert at the end that's been washed out. You better have a skid plate and some solid treads if you want to get through. 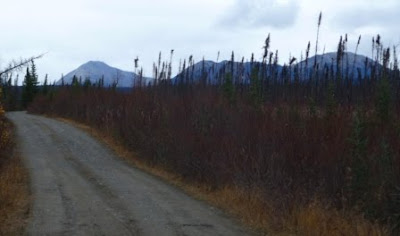 Here's a different looking view of the Kenais from one of the many large burn areas.

When I got back to my car a newer looking pickup came down the trail from the airstrip.
It was the first car or persons I'd seen in about 3 hours at this point.
The truck stopped 40 feet away, and I assumed probably because they thought I might be headed towards them.
They stayed put though even after I dismounted, and I went about what I was doing, wondering why they were waiting.
KAPOW-KAPOW-KAPOW
Holy sh!t I thought as I ducked my head and waited to hear the shattering of my windows or ricocheting of bullets.
Nothing, I looked up to see a rifle sticking out the drivers side window pointed towards a stand of burned spruce, and caught the spiraling motion of a grouse falling from a bent over tree.
Whew, I thought, even smiling, momentarily glad I hadn't just been caught in some kind of Alaskan version of Deliverance.
I waited to see if they would get out and retrieve their quarry, even if illegally gotten.
Nope, they laughed and drove on by.
What the hell?
Really?
I listened to the sound of their truck fade in the distance as they headed for the highway.
I guess I got a free dinner I thought to myself.
I was still wearing thin spandex and didn't want to wade through the sharp undergrowth though, so I changed first, knowing the bird, if not dead but just wounded, would limp to denser cover and likely be even harder to find.
Sure enough, when I went and looked I found I was the only thing up for dinner, as the flies, awakened by the warm weather, built up their swarm.
This is the second event of this nature I've witnessed, two weekends in a row. I drove by the bear that was shot in the aforementioned story minutes before it was shot in front of a group of onlookers feet from the highway.
While this is not everyone, these are people who call this place home, like it or not.

The buffoons can't have all the fun though. While my offroading days are long gone, I still love stomping my fossil fuel powered feet in the puddles from time to time. 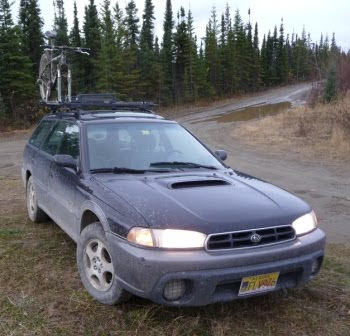