In a place that's so big and wild, whenever I spend the weekend in, or have a camera technicality n a trip like last weekend, I can't help but feel a little guilty.
Part of the guilt with staying in is that even though it doesn't appear that I'm going anywhere anytime soon, I still can't help but feel that I'm missing something I don't have a lot of time to see.
It does seem like every two weeks here is different than the last, either with the weather, the scenery, the snow conditions, etc; but there's also a sense of urgency I can't shake.
It's a sense that this place is all going to fold up to the sound of a buzzing alarm, and I'll wake form my dream to find it's no more.
That's not a bad thing I guess.
I also hate when my camera's not there to capture the scenery, even if I'm visiting a place I frequent often.
For whatever reason though, I often find my biggest concern when any of these things happen, is that I won't have an adventure to write or post pictures from here.
It seems like every time I hit the trail, or make my own, I come back with photos that melt my computer screen, and more often than not, a have a story to tell.
Last weekend when I went up to Crescent Lake, excited to get some art from the rarely visited locale, the second I realized I forgot a battery, the first thing I thought was: "Damnit, now I won't be able to post photos from this ride to the blog."
Seriously?
That's what I'm thinking?
I'm riding a sweet windy little trail that goes to a beautiful aquamarine lake sandwiched between snow capped peaks, and I'm annoyed that I won't have blog material?
That mentality often follows me out the door, and I have to say, this blog has lent itself to making me more prudent on taking the camera on more trips than I probably would otherwise.
That's made apparent when I cram a weekend full of adventures. Usually once I'm happy I've got a nice post, the camera may still go for a ride/hike/board, but it gets pulled out of the bag a lot less frequently.
Don't get worried though, I'm not about to say that I'm going to try and change this quirk.
I'll still make a habit of checking twice, even thrice, before I leave, that I've got a camera, and a battery.
After all, these photos get me through the week sometimes.
Just know that when I'm taking it easy, laying around the lodge on every odd weekend or so, the little hamster wheel upstairs is spinning at the red line trying to come up with post content. 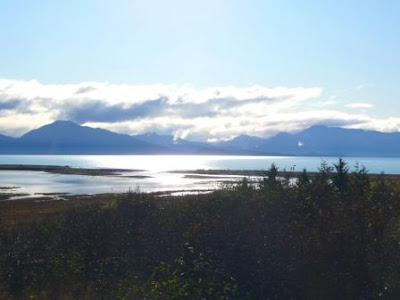 Scott and I went to Homer and Anchor Point today to do two schools related stories. We enjoyed lunch, nice weather and nice views across Kachemak Bay from the Alaska Islands and Oceans Visitor Center.
Posted by Dante at 10:14 PM