On my run Tuesday after work I had some unexpected but pleasant company.
A massive German Shepperd came bounding out of some one's yard as I ran past and decided to join me for the rest of my jog.
The dog was hanging out in a neighborhood that has a few dogs, one of which is a real prick and snarls and snaps when I go by.
Fortunately I didn't see the others around, but being such a big dog I slowed down to a walk.
The big shepperd just wagged his tail and even lightly grabbed my sleeve as I scratched his ears, as though to lead me off.
I started up again and he took off in front of me.
I've had a dog or two follow me on rides and runs before, and on the latter I'll usually stop so the flustered owner can retrieve their pet before their pooch follows me to the other side of a pass.
I figured this dog would turn around once I rounded the next bend as most do, but instead he just kept on going.
It's not really my problem if someone can't keep track of their dog, and I figured eventually this dog would decide to go its own way on its wandering, but when I returned to the highway he was still a few feet out front waiting to see where we were going next.
Eventually I got back to camp, the dog still wagging his tail excitedly, overjoyed by all the new sights and sounds, and clearly clueless to his location.
Sure enough he followed me right down to camp.
The big dog was so trusting and people friendly.
He responded in a snap to a whistle, and when I opened the door to the lodge he went right in.
As tempting as it would have been to adopt him right then and there, he had a collar and a tag, and I was sure someone somewhere was probably starting to wonder where he was at, so I went and grabbed my keys and a coat.
When I opened the trunk to the suby he leapt right in without hesitation, and I drove back up the road to where I'd found him.
He'd hardly jumped out when a man emerged from the house I'd stopped in front of called "Barron," and the dogs head looked up.
I talked with the owner for a few minutes, told him his dog had gone for a nice run and what a nice looking dog he was.
The owner was gracious and friendly, and said he'd just had surgery, evident by his noticeable stiffness and limp.
I felt bad for the dog, which clearly needed to get out and stretch.
When I walked back to my car he trotted after me, not towards the house, and I had to turn around and walk back so his owner could get his collar.
I'd love a big dog to run and bike with on the weekend and keep my feet warm while I write these posts, but I can't, and I saw that evidenced by this dog's situation, which is sadly to me, so similar to many other dog's situations.
First and foremost, there's no dogs allowed in the lodge, so I just can't have one right now.
There's more than that though.
To most people, I think, pets like dogs are just a fuzzy form of furniture. They're something you keep in your home or yard to warm it up a little, add some character.
Sure, the average pet might get walked from time to time, but most, like their owners, are over wight and out of shape.
For some types of dogs that's OK, but for others, its evidently not, and they're noticeably depressed or ill behaved as a result.
Fortunately it doesn't take a lot to make most dogs happy.
Feed them, pat them on the head, let them out when they whine and they'll love you.
For the dogs this works for, great, but that won't likely be the dog I want.
The dog that can follow me from one end of the Resurrection to the other can't spend everyday of the week couped up because I only have time for my own workouts.
That same dog needs to be loyal and trustworthy to not disappear over a ridge or come tearing back with a brown bear in tow.
That dog can't take off for Nome because it's gun shy, nor can it eat whatever I might be so lucky to line up in my gun sight.
I clearly ask a lot of my best four legged friend, and so I think it's reasonable to return the favor.
I know I can't do that right now, I couldn't do that if I was living in a little apartment in a big city.
I don't see how it's fair to not make sure a dog isn't as happy as he or she makes me.
So while Barron wagged his tail wondering if maybe I'd take him into my home, or just go back and explore more of the neighborhood with him, I knew there was no room for him, or any other dog in my life right now, but if he wants to go running again, and his owner wants to throw me a leash, I'll take him with. 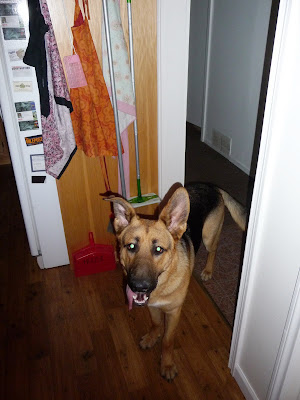