Ferreting out a problem 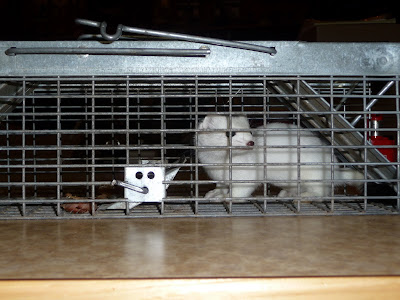 A couple weeks ago I posted that the lodge had a new resident.
I nearly fell off the breakfast bar stool when I saw a little white ermine peering at me through the slats of a cabinet door.
Since his most recent sighting he's seemed to stay away, likely striking fear in the hearts of the little voles that live under the building.I’m sure all the noise of construction and renovation above ground has helped to keep the curious critter subterranean as well.
On Sunday however, Joe said he was up stairs watching some TV when he thought he heard me downstairs.
That was impossible of course since I was at work, and when he yelled and no one responded he went and peered over the railing.
The ermine was back, and furiously tearing through the many boxes stacked on the floor.
Joe said he chased him around, finally striking him with a wooden dowel. The little weasel rolled over as though he'd seen his last, but when Joe gave him a nudge with the stick, the ermine sprung back into animation, and careened off for the nearest shelter.
Eventually it found its way back down the vent hole in the floor under the cleaning closet, but later that afternoon Joe said he saw it on the front deck trying to get into some garbage.
When I got home I found the Have-a-heart trap baited with a chicken wing in the middle of the living room.
I won't question Joe's trapping expertise, but I decided to move it into the closet next to the chosen entry point.
A few hours later, actually, while I was typing up Sunday's post, I heard a strange noise from the hallway, followed by some rattling.
When I went to look, sure enough, the snow white ermine was locked inside.
He was actually quite calm given his dire predicament, far more relaxed than either Joe or myself, that's for sure.
After snapping a picture and debating what to do we decided to try and drown it since that would be the quickest way to go.
I suppose we could have driven it off somewhere and let it go, but a moment later I was glad I didn't.
As the sink filled up, Joe picked up the cage to put it in, and the rattling finally got the better of the little guy, who made a pannicked loud chirp.
That was about when I noticed how bad the kitchen smelled. I assumed at first maybe it was Joe. He'd been working all day on the renovations, but holy smokes, this was just horrible.
The trap was too big to fit in the sink, so I moved it outside for plan-b; all too eager to get away from Joe.
When I came back inside to load a bb-gun though, I noticed the whole downstairs kind of smelled, and it wasn't really body odor so much as "skunk-lite."
I commented about it, and Joe said ermine's in fact had a scent gland much like a skunk. The ermine had skunked the kitchen.
I felt a little bad to have to dispatch the guy, after all, it wasn't his fault the crawlspace below the lodge was also full of ermine food; food that I'd just a soon have in his belly than creating havoc and digging tunnels.
It also wasn't his fault there was a perfect little hole to climb through that lead to a warm wonder world that surely had food as well.
Coexistence wasn't an option though, especially not if he made a habit of skunking the place.
More, there was no way I was putting his smelly butt in the car where he could blow a load again in a small space.
Anyway dispatching him was clean and simple and he was out before he knew what hit him. Meanwhile, de-stinkifying the countertop was a little more difficult. Let’s just say that the swiffer wetter pad I used, heavily loaded with fragrance, was neutralized by the time I was done. I haven’t caught anything else since then -- though despite my instruction not to, Joe ate the rest of the bait. Oh well. As far as I know though, ermine's are usually solitary creatures, so he was probably on his own down there.
Posted by Dante at 9:57 PM

That is truly disgusting. He didn't really eat the chicken wing did he? I love the wildlife stories.