There seems to have been a number of unwelcome house guests dropping by the lodge this fall.
It started with the aimless buzzing of a few lost gnats, or fruit flies, sometime in September.
The hapless bugs buzzed mostly around the kitchen, showing up almost on cue at meal time, particularly when salad or fresh broccoli was on the menu. Otherwise they lingered around the trash and reminded me to keep moving it out on a regular basis.
Then in mid-October their population blew up overnight.
Hundreds swarmed around the lodge. 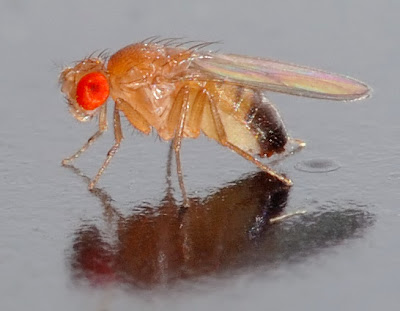 Photo courtesy of wikipedia.com
We went on a rampage, taking the trash out every day, dousing counter tops with chemicals after every meal, stowing anything even bagged and bottled food and condiments in the fridge, and killing hundreds a day.
In one night alone I left a partially full bottle of beer out and found perhaps one hundred of the pests drunkenly bobbing in it the next morning.
Soon the ceiling of the kitchen looked like a battle field with the carcasses of dozens smeared on the bright white paint.
Yet for all that I killed, the little bugs kept coming in force.
I tore open shelves looking for something, a forgotten piece of fruit or vegetable rancid, rotting and ripe for the eggs, but found nothing.
After two weeks of battle I was growing weary.
We had fruit fly infestations almost every fall in Vermont, but eventually we got rid of the food source -- a compost bucket -- and they were gone soon enough.
Here however, they continued to proliferate with seemingly no end and no source.
I grew fearful the bugs had found something rotting in a wall and this battle would never end.
Then one evening I noticed the giant bag of bird seed by the glass door.
I'd seen the bugs by the door, but that's what bugs do, hang out by windows and doors right?
I didn't even think they could breed in seeds anyways.
Curious though, I opened up the plastic bag.
A swarm of several dozen flew out the top immediately.
When I looked back down, the 25 pounds of black sunflower seeds seemed to be moving themselves as hundreds, if perhaps not a thousand flies began emerging from the seeds.
In a flash I was twisting the bag shut and running to the door before any more escaped.
At 20 degrees out that evening, I knew the bugs had enjoyed their last.
Since then, the survivors have steadily disappeared and the kitchen ceiling has been swiffered clean.
This morning however, a new guest showed his face.
Sitting at the kitchen bar eating my oatmeal and staring into a newspaper, I heard some rustling in the nearby cleaning closet.
When I looked up, a small white furry head was poking though the closet door peering at me.
For a second I stared confusedly back at it; when the white head's body slunk out the door and in a flip, turned back around and scurried back into the closet. 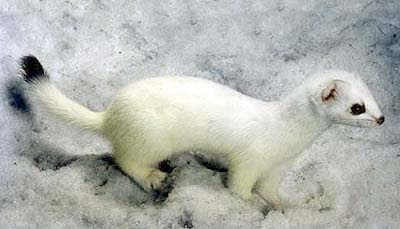 Photo courtesy of borealforest.org
"What the hell?" I murmured as spoonful of oatmeal spilled out of my jaw set agape.
For a second I thought we had an albino red squirrel in the house, but the black tipped tail belied this was an ermine.
The critter was probably preying on vermin under the lodge and had wandered up through a vent.
A few minutes later I heard a rustling again, this time from the two seat couch by the stairs.
There, the ermine peered at me from under the sofa.
This time I needed no direction.
I grabbed a broom and charged the little critter.
In a flash of white it was gone.
In a single bound the erimine could leap three or more times its body length.
There was no way I was going to catch this thing.
It later made a sprint in front of me at full speed across the the living room touching the ground perhaps three times before finding safety in the piles of junk and tools scattered about.
I bought a trap on the way to work, but since I got home this evening, I haven't seen my fuzzy ferret friend.
Hopefully for his own good, he found the door and won't be returning.

This week I've been skiing on Arc Lake after work since the trails don't have enough snow yet.
Temps have dipped as cold as -10 for the skis, obviously its been even colder in the mornings.
Anyhow, normally these temperatures would make skate skiing nearly impossible, but the crust ontop of the ice seems to hold enough moisture to make it more than possible as long as I'm layered up.
Lake skiing isn't the most fun, but it's been good for working on technique and meeting up with others.
It also makes for a unique photo opportunity.
I stopped by the lake tonight towards the end of the ski club's practice to take a few pictures using my camera's "starry night" feature. 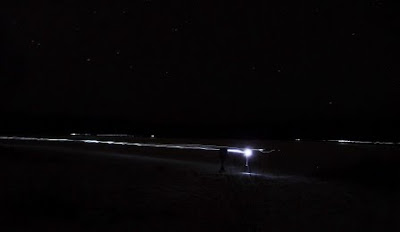 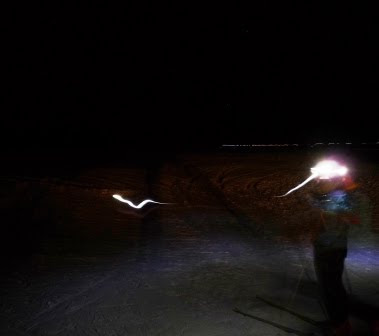 Driving through Soldotna I shot a few more. 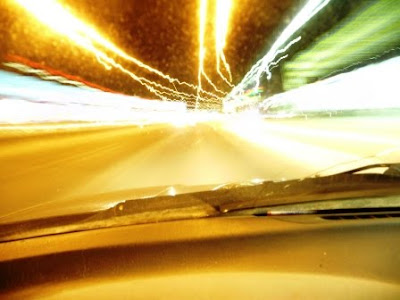 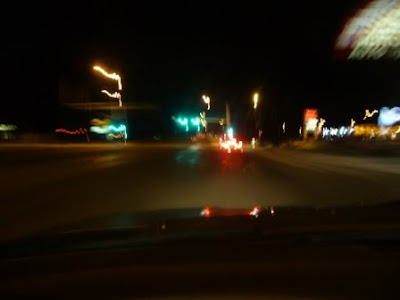 Just so you know, it likely was not a simple ferret. Your photo looks more like a polecat. Ferrets are extremely social and would have likely come running up to you at some point. Polecats, the wild variation ferrets were domesticated from are much more antisocial.