We still don't have much snow in the central pen, but the cold temps have set a hard layer of ice over the lakes and streams and the hoar frost that's built on top of the meager snow pack has made everything nice and sugary. It's kind of cool, there's no reason to go anywhere to ski since there's so many lakes in Sterling.
I went and did a four laps around Bottenintnin Lake (map) Friday just off the beginning of Skilak Rd. The 1 by half mile lake with little back bays made for an interesting circuit. 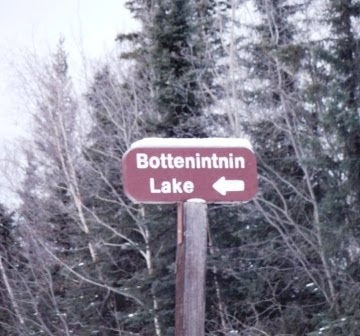 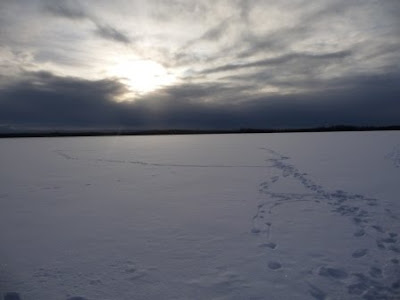 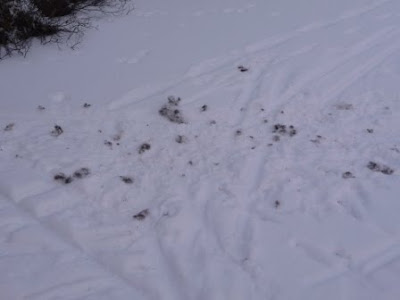 In one of the little corners of the lake I found the remains of a freshly killed rabbit. The first time I went by the rear legs and spine along with balls of fur were scattered about. Two hours later when I came back on my final lap and had my camera with me I skied over to the site and found something had been working on the bits and pieces while I skied. The sugar snow did a poor job holding prints though. Probably an ermine or something small and hardy. 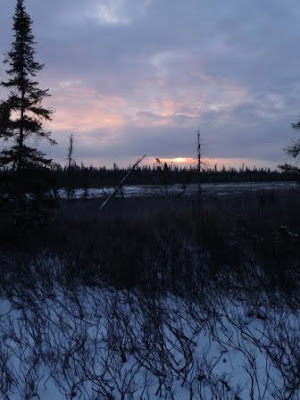 Saturday I had a bunch of errands to do, but I still snuck out for an hour and a half of kick ass crust skiing on the Moose River (map). I felt kind of silly driving a mile and a half to the the boat launch, I could have walked to the confluence from camp in about the same time, but I didn't want to subject my ski boots to the hard river stones, nor my rear end to the chance of slipping on any glaciation.
The windy stream was really cool to ski. Once past the power lines the meandering buries your sense of direction and it starts to feel like you're totally out there. If you look at the map and follow the river upstream, I skied to about the point where it makes its first split around a very small island.
I started to ski through the area but recent overflow had weakend the channel ice and the sun was down at that point.
I hope I get a chance to go back up there when its not overrun by snowmachines, what a treat.
Oh ya, the sunset and temps up in the mid-teens was all OK too I guess. 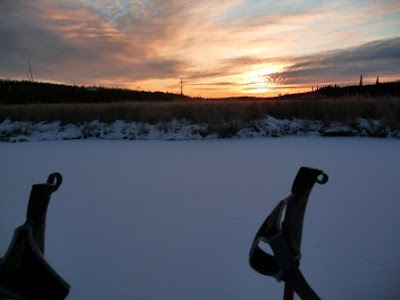 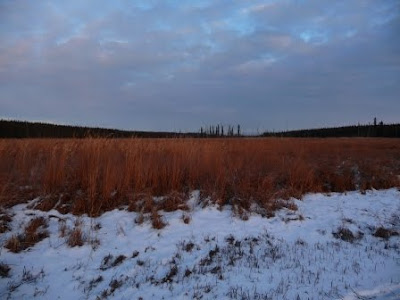 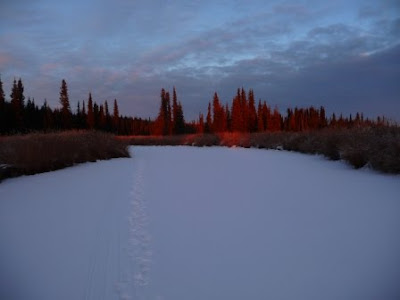 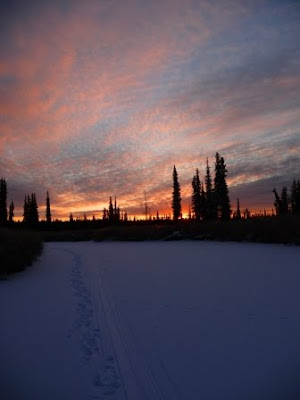 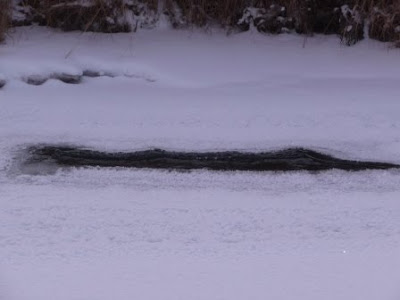 This was the only open water I saw but it was enough to make me nervous. At that point the stream was only about as wide as a trail and there was no way to skate without pretty much being in the center. 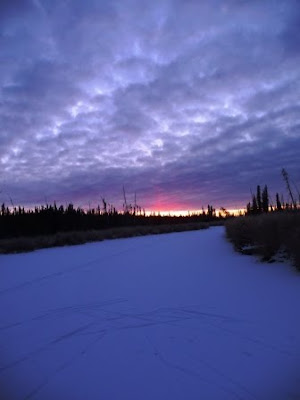 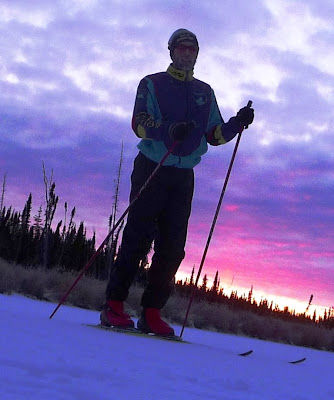 Skate skiing the Moose. It's far from perfect I apologize. It's really rough in the beggining but hang in there, once you see the ski pole stick out front I get a hold of the camera and it gets better. Also, not to stroke my own ego but... watch my shadow go by early on, and note that I'm only skiing with one pole. I'm not even pushing things and its still a good clip. What did I say about my ego?
Posted by Dante at 10:25 PM