Cooped up last weekend from lousy weather, I've been getting angsty for a big spring adventure to make up for the lackluster cold season and get the next one started off right. As the weekend rolled out Saturday already looked to be a loss as a little mini storm spit all forms of precipitation and wind on Southcentral, and the as-of-late unreliable forecasts showed only a hopeful glimmer for Sunday.

I had initially planned a little Valley adventure to the north with some skate skiing and road biking, but when I woke up Saturday morning I had a text on my phone from Jack about slamming the Bomber Traverse in one go on Sunday. That was all I needed to see.
A rest day was a good call and I kept it simple with only a short afternoon mountain bike ride up Canyon Road in a snow squall. Gotta love AK.

The Bomber Traverse is a Southcentral backcountry must-do. An all-season 18 mile trek through the southern Talkeetnas that rolls over at least two mountain passes and two glaciers, in winter it is often attacked as a 2-3 day mountain ski tour. Wwith the long daylight hours, Jack wanted to forego heavy packs and the leisure of time for a blitz style grunt. 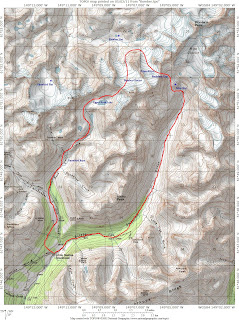 There are many variations of the traverse, Jack printed out the above map of our route, which ran counterclockwise from the Motherlode Lodge (Little Susitna Roadhouse).

After departing our redevous in Eagle River at 7:30, Jack, Kruz, Eruk and I were on trail by 8:20, heading out from the Gold Mint trail up the 8-mile-long Little Susitna Valley.

For the first two miles we sought out the best lines on the otherwise well-tracked and iced-over trail, but after that, the alders started to open up and the valley floor became more accessible revealing prime crust conditions. With just a thin layer of fresh snow frozen to the otherwise frozen crust, it was hard to just have to trudge across on heavy boards knowing full and well skate skiing would have been rocket fast.

Veering climbers left from near the base of the valley's head wall, we headed up a south-facing slope known as heartbreak hill that lead to a bench we were able to follow around a large and prominent knoll.
Though we had intended to climb to the Mint hut, we overshot and climbed about 2-300 feet above it, making it not worth our while to descend to it.


At four hours in, the steep and sun-cooked Backdoor Pass loomed above.

From the get-go, I felt like we couldn’t get up over the top pf Backdoor Pass fast enough. Roller balls and old slough debris littered the steep slope. While that evidenced that it was likely stable, it didn’t make it an appealing place to hang around. Pair that with the sun beating away on it and I really wanted it to be over now!

We set off and I started tracking a near SFU line on the saturating snow trying to make the most of it’s natural elevation.
About a third of the way up Eruk, who we could see on the bench below, Radioed jack and said he was going to head back out.
At a crux point in the trip, we decided to go onward.
About two thirds up, Jack, taking advantage of some earlier ferckling about the route, as well as my sun-cooked and sugar-low brain, yelled that he thought we were headed up the wrong pass.
I took the hook, line, and sinker and nearly turned on my skins to glide back down and punch him in the face.
Continuing on, the shade cast by the cliffs forming the upper pass’ southerly wall, and the sound of crumbling rock on the sunny side, drove Kruz and I to transition over to kicking steps.
Though steep, the snow was more than deep and soft enough for even my soft boots to get good purchase.
Mentally getting out of the broiling sun probably made an even bigger difference.

After popping over the pass at about 1:30 we were treated to a long sweeping view down the Penny Royal Glacier. We discussed moving southward to get at some higher elevation and more protected areas that probably would have held better snow, but after over 4 hours on the go, we were all ready for make a descent. 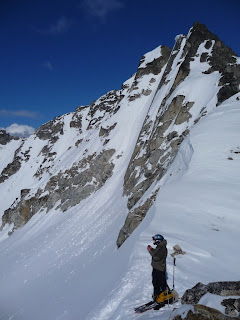 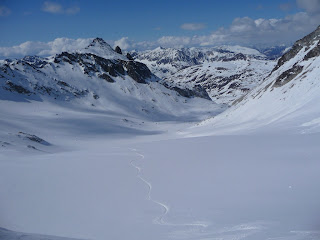 The Penny’s snow was wind-effected, with an inch or two of dust on top of a breakable crust. On a board it was quite alright as long as I carried speed, which was sort of a necessity given that most of the Penny falls at an angle of 25 degrees, if not less in places. We bottomed out and started our traverse back around the buttress that separates the Penny from the Bomber Glacier.
The Bomber Glacier climbs extremely gradually, but fools with your head.
Though we made practically no vertical change, we stared at our pass back over to Reed Lakes for about two hours.
Though sunny, we had pretty reasonable temps, and the closer we got to the pass, the better the snow quality seemed to get.
This fueled some angst on my part as I began to think we should have made the tour in the normal clockwise loop. You can imagine how that sat with Jack, whose skied these mountains for longer than I've been alive, when I told him so! It's OK, he had a another one in the bag for me.


As I stomped in the kick turns up the pass, praying I would hold my stance and not fall back down (I was feeling strong, but I didn't need this climb twice) Jack yelled about how surprised he was the snow was this easy to climb on.
"Then again, I'm not breaking trail," he added.
I shot him a look that said a few different things at once but mostly said, "No shit!."
I knew what he meant though and I had to agree, it could have been a lot worse.
The final pitch up the pass was just as steep as the Backdoor, but only a fraction of the vertical and on excellent snow.
A few brutal kick turns and one neat one that nestled into the side of a cliff face got us up and over.
Below we could see our route out, with the Reed Lakes dropping life a frozen staircase below.


The drop down the wet and gloppy head wall had everyone on their toes, but Kruz made a few ski cuts and the slope held. It turned out to be really excellent fresh corn conditions all the way down past the first lake. 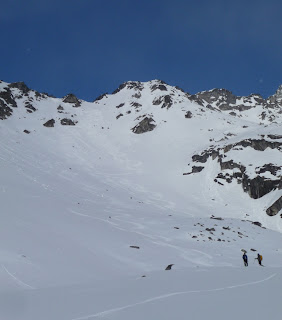 Looking back up at our tracks laid. 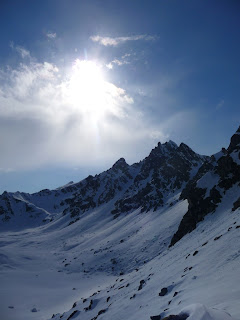 Once we made it to a certain point the angle of repose fell off at too low of an angle to keep boarding and I began a long tele-palooza descent. With such great snow and mostly gradual terrain, I had a blast just cruising along. I snapped it back together for the final descent down Reed Creek. As we neared the floor of the the valley the corn turned bottomless making the going pretty treacherous. If you could double pole and find an old ski track or snowmachine track though it was possible to keep up enough momentum to float.
We hooked into the groomed Archangel Road a couple miles later and rode that most of the way back to the road before turning off and skiing a gentle slope back down to the car on 8 inches or less of slush for coverage. It was almost easier to ski the dead vegatation.
At 11 hours round trip, we managed to capture ideal conditions through and through, nailing down a trip that takes most people two days at least, in just one.
I'll do it again.
Posted by Dante at 11:57 PM

You think this same trip is possible in 12 hours in the summer? Very cool looking trip. Nice work

I would say yes, but probably only if you're looking at it as a mountain run, not a hike, and are comfortable moving fast over uneven terrain. The advantage to summer travel is you can take less gear and move up valley faster than you can trudging along on fat skis, but you lose out to the speed skis cary on the descents, and the ease of winter travel crossing scree fields, glaciers etc.

This looks like a tremendous trip from the photos I've seen. I'd do it this year, late June as an overnight trip staying at the bomber hut. Would you recommend clockwise or counter clockwise? Is it a pretty safe area to leave a vehicle overnight at the trailhead without a breakin?