I forgot two things recently. Actually, didn't really forget the first, but two weekend ago I made a "semi-solo" sojourn back to Pastoral Peak, but never got around to posting any photos. This past weekend I did, however, forget to bring my camera along on Sunday when Coast Guard Jared and I rode the south-end of Resurrection.
I thought as we left the lot that it wouldn't matter as it was spitty and gray in Cooper Landing, but of course, the weather broke up while we rode, making for some epic scenery of clouds parting over the still snowy mountain-sides.
Conditions were slightly better than expected though, but mostly typical for this time of year. The section of trail from Juneau Falls to Juneau Lake is still wet and sticky in the usual places with a few hike-a-bikes, mostly near the Trout Lake Junction. The climb out of Cooper as well as north of Juneau Lake to Swan Lake is excellent and dry, as was expected. We stopped at Swan Lake and enjoyed some sunshine while we had it, but the south-facing benches leading up into the pass looked greener than the valley floor and I'm sure we could have made it up the next pitch no problem before seeing snow.
The one big surprise was remnant ice cover on Juneau Lake. As we rode the shoreline stretch, a southwest wind was pushing the detached ice up onto the trail. Pretty trippy to watch as, though it moved slowly, the process was very loud and inched along steadily. Interestingly as well, Swan Lake was ice-free. I'm curious why that would be. I would think it would be subject to the same deep cold temps in the winter and probably even less wind to help break it up. 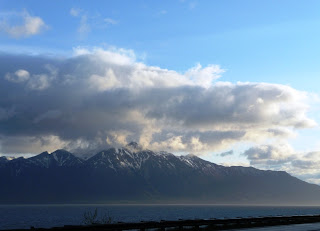 On May 7, I made a "semi-solo" sojourn out to Pastoral Peak in Turnagain Pass. For a map and more on Pastoral itself, check out the TR from last May (LINK)
Jack hit Pastoral, solo as well, on Friday (May 6), but even though in retrospect I should have called in sick, I decided to be a good employee and go to work on what was a beautiful day. Jack tracked in five runs, and called that evening to report conditions that were about 95% as good as the previous year, and that was a week later in a snow year that was 50% under last year and 25% under average.
Unfortunately, Jack was out of the game on Saturday and gnarly weather was supposed to move in Sunday. Unable to get anyone to rally, I did something I don't normally like to do when it comes to backcountry skiing: I went alone.
I don't know why certain activities, mountain biking for example, I almost prefer to do alone (though company is always nice in any pursuit)﻿, but backcountry skiing alone just drives me nuts. Anyhow, I went for it.
From the parking lot, there were several groups headed up Taylor Creek, and initially I thought Pastoral was going to be a mini-Tincan, but at the top of the bench, the majority of the skiers headed up the flanks of Sunburst on a corn snow mission, laving one solo skier not too far in front of me and two other much farther up the pass.
I got up to the solo skier, who's name I think was Paul. Paul, in his 50s and an Anchorage native, has been skiing Turnagain for longer than I've been alive back when wooden skies and pine tar were the go-bys. We ended up syncing up, hence the "semi-solo" of the sojourn.
We reeled in the two others at the top of Taylor Creek Pass. The two, who looked about my age, were none to pleased to see that Jack had skied Pastoral hard the day before, nor that two others were overtaking them.


The two disgruntled skiers at the Pass eventually headed for a mellow slope below Pastoral, though we were later joined by a couple who came in about the time we dropped off our first run.

With Paul's encouragement, we skied down the steep north face of Pastoral (picture below), a run we eyed last year as well.
Paul was going to call it one and done, but with the snow so good and the powder season in its finale, I got him to commit to one more, burning legs be damned.
We skied under window of clear skys all day. To the east, a wall of snow moved back and forth all day threatening to overtake us seemingly at any minute with gusts of wind, but always backing off. The the west the sky was dark blue and looked like rain.

Letting go of winter is a hard thing to do. Skiing may not be over just yet, but other than throwing down mucho dinero for a flight into the Alaska Range, the powder season is.
Singletrack is good and all, but summer is too long, winter is too short; praise Ullr.
Posted by Dante at 10:54 PM

As a Kenai bluff dweller, I ask, "What summer?" Summer, like winter, features cold, wind and, now that the seagulls are back, white stuff falling from the sky.