I admit that from time to time I find myself missing my old Sunday to Thursday work sched at the P. Clarion. The Friday for a Saturday just about guaranteed that I would have the trails or the mountains to myself for at least one of my off-days.
This past weekend though, I have to admit, working the more conventional Mon-Fri was pretty nice, as I was finally able to fully enjoy a Memorial Day weekend for the first time in many years.
In keeping with full entertainment value and capitalizing on the peak of the spring transition season, many sports were partaken in in the course of the three-day break.

Collin, Amy and I met up Saturday morning in south Anchorage, hoping that our somewhat later departure would put some distance between us and the mad rush of "Anchor-roaches" (can I still make fun of "Anchor-ants" even if I may qualify as one?) headed southbound Friday night and early Saturday morning.
The original plan was to head to the base of Manitoba Mountain for a bike-hike-ski mission, but headed through Turnagain Arm it was apparent that a gray and spitty system was making its way through and making things unpleasant at that.
In Summit Pass, with sprinkles falling, we decided to opt for plan-b, and take a ride up Devils Creek Trail.
The week prior saw temps rocket into the high 70s in Cooper Landing, and the meager snow pack wasting fast, so I was optimistic Devils Creek valley would be dried up relatively good for this time of year.
As we geared up, however, Collin and Amy discovered Amy was missing a very integral front wheel for her bike. Such is one of the pit falls of stuffing a car for a weekend of many different adventures: there's a lot to remember and plenty to forget.
Amy headed back north to retrieve her wheel while Collin and I headed up the pass. 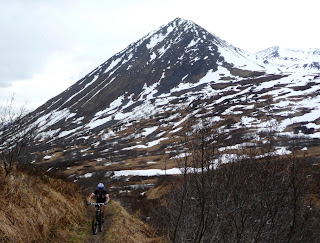 The trail just about qualified as bone dry except for a few wet spots and the usual stream crosses. We went in about 8 miles, crossing five snow patches in the process, before reaching a small bluff that overlooks the pass. From there, we could see that about another half-dozen smallish snow patches filled the minor gullies between us, but otherwise all looked clear. No major slides came down this year, as was the case last spring, leaving part of the trail blockaded will into June. The trail should be full clear to the Res Junction within a week or two depending on the weather patterns.


We regrouped in Cooper Landing where we found out that Amy had managed to get a hold of Michael, who was still in Anc, and got her wheel, allowing her to head to Alyeska and carve up some corn.
With rain falling in Cooper we headed for fish camp to sleep under rooves and in dry beds.

Sunday dawned with patchy blue skies and a promising forecast.
Kjell joined us and we headed to Cooper Landing to meet with Michael to ride the lower end of Russian Lakes Trail.
While earlier intel had reported a still snowed-in upper section, we later learned the entire trail was rideable. The lower section turned out to be a good option nonetheless. 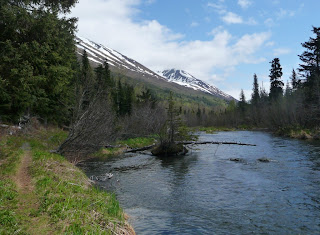 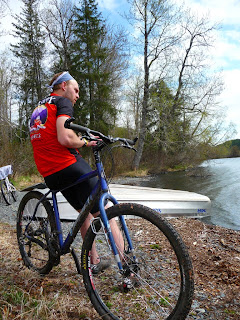 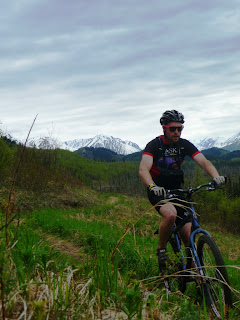 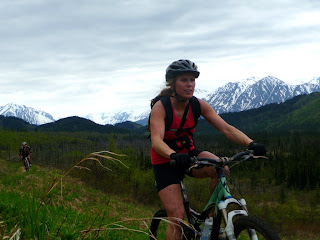 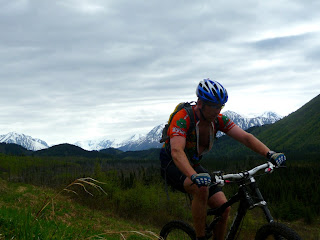 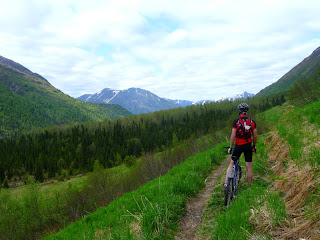 Monday, with skies clear and blue, and temps forecasted to get into the mid-70s, we did what any reasonable Alaskans would do: went skiing. 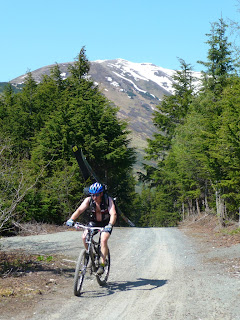 Tele-Pete gets continual credit for his triathlon approach to the slope of Manitoba, accessing the mellow ski field via bike up mining roads and a hike to snow line.
Narv and I did this trip in early June last year (LINK). We found a bit more snow on the roads leading up the mountain and the snow line much lower then. In another week, this trip will be hard to justify.
As is, this was all about the tour and had little to do with the actual turns which, other than a few near the top, were mostly on rotten mank. Had we pulled ourselves out of bed a little earlier we might have actually found some slightly better conditions earlier in the day though. We didnt' descend until 5 p.m. 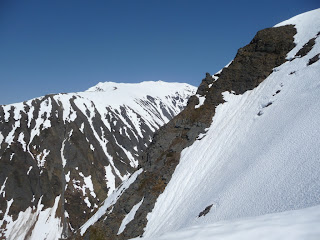 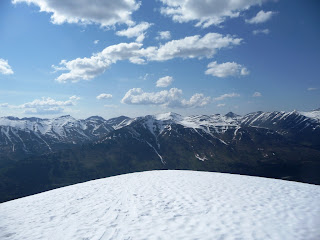