Get Up and Go

Last Wednesday I went for a hike up Flattop with a new friend. Flattop is that hike that every place has that everyone has done, except that being Alaska, it's a bit more of a steep scramble compared to most other place's "everyone's done that" hike.
I had not hiked Flattop, but as it turned out, it was the perfect spot to go for the evening. Crystal clear skies, low-level fog, and an October sunset made for vistas to Denali to the north and Iliamna to the south.
﻿

I had Friday off, and I planned for an early start to attack Johnson Pass from the north, riding it out and back. A check of the weather station near the northern trailhead at 10 am revealed an ambient of 19 degrees. That was enough to slow me down and think about maybe a more leisurely out and back to Johnson Lake, a mile south of the Pass.
﻿ 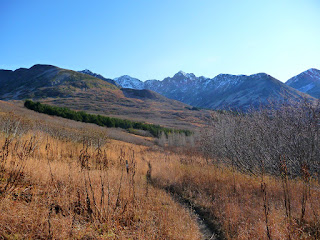 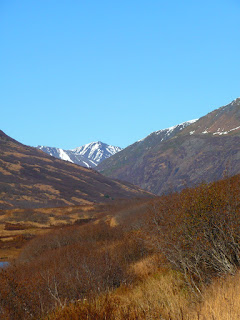 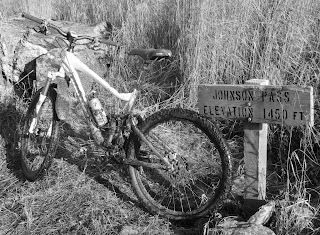 The trail could be described as 50/50: 50% fast, frozen hard pack; 50% other. Other consisted of freeze-thaw mud/slime, plexi-glass ice, hoar frost dirt (looks like its frozen but is actually crystallized and collapses like styrafoam), and a few wheel-swallowing muck holes that looked solid from above but were anything but that an inch or two below the surface. Going was slow, and I could not clean any of the technical sections. Vegetation was non-existent and the trail was dead quiet. I was glad I finally got to ride this section of trail, the only section of Kenai single track I had not yet ridden this year. It's a challenging, entirely different from the south end of the pass, and a place I wish I could ride more often, though the 6-foot+ tall stalks of cow parsnip reminded me of why spring and fall are the only times to come here. 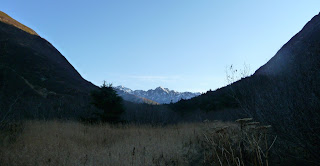 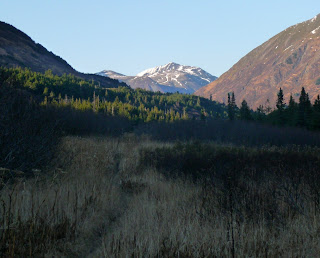 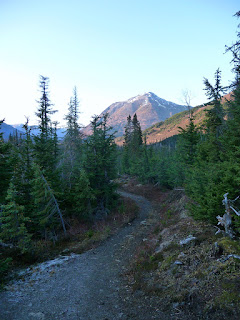 Cold and tired, I stopped into Cooper Landing for food, and carried on to Sterling to crash at the lodge for the night. After talking with Joe for a while on his efforts to retrieve his docks lost in the floods, I went to zonk out.
Nearly asleep, I started to notice my room was getting brighter and brighter. Light pollution is non-existent at camp, except for when ice-fogs set in, and then the ambiance id orange from sodium lights on the highway, not pale green as the rooms seemed to be.
I peered out the window and to the north the sky was alive.
I watched the aurora dance for a while before finally going outside and shivering for a bit. The show was awesome, but the pictures sucked. This was the best I got. Others are more talented in this arena than I: Time Lapse Video 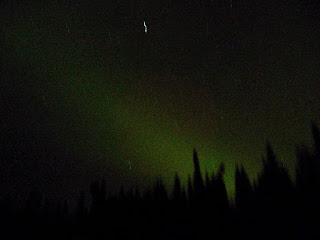 Saturday I rode Crescent Lake Trail. Skies had turned gray. I put together a 1-minute video.
﻿
On the way to the Lake I passed only 2 people coming down from a night at the cabin. When I reached the little shelter smoke was still whisping from the stove pipe, and with feet cold from crossing icy streams, I helped myself to the residual warmth inside. I spend a while there, enjoying the quiet, when I noticed it has started snowing outside, hard. The ride out was pretty. Big, fat flakes were falling hard, but only seemed able to make a dusting of a coating on a trail that was otherwise frozen hard. It was one of those rides that you know you're never going to forget.
Sunday morning I was up early to meet Adam. Earlier this fall I helped Adam put is duck hunting gear out on the Knik River just north of Anchorage. With winter moving in quick it was time to pull it, and a good tide early in the morning necessitated the dawn patrol. Fortunately quite a few others had similar ideas, and there was lots of help. Unfortunately, even though we had a pretty cool sunrise, my camera disliked the low light, so I have only a 10 second video. 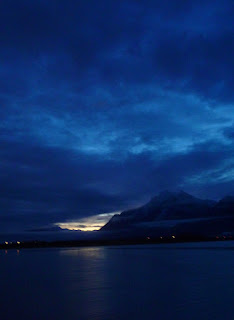