While the east coast is awash in the soaking torrents of a ghoulish winter hurricane, Southcentral has remained high and dry, though very cold.
I spent my birthday evening with a friend above Anchorage in the Rabbit Lake Valley, enjoying the moonlit snowy mountains and a camp-cooked dinner that went from piping hot to icy cold faster than we could move fork-fulls of food to our mouths.
I did not have a thermometer to confirm temperatures, but my camera battery would not stay on long enough to let the camera capture the long exposure required for a night shot so no photos, but it was a perfect way to enter year 27, and one that won’t be forgotten.
On Saturday morning Brian and I drove down to Moose Pass to Dave and Sharon’s cabin, and along the way my car reported a temperature of 1 whole degree Fahrenheit at Granite Creek in the shadowy and low south end of Turnagain Pass.

At the cabin, temps were in the mid teens. We drank coffee and let the weakening October sun climb a little higher before heading further south to the Primrose Trail Head off Kenai Lake to ride the Iditarod Historic Trail to Divide and back.

In the summer months this relatively new section of trail varies between wet and soggy to dry and loamy depending on the weather, though magical and beautiful every time.
I had heard stories though, that when allowed time to freeze before the snow falls, it was one of a kind.
The rumors were confirmed. The trail was 95 percent frozen up like concrete and completely mudless. A few sections were crystallized, though several riders who had come before had helped to smash the icy turrets back into the ground. The long bridges that cross marshy areas though this section were some of the most difficult features. Under the thick rain forest canopy hardly any snow covered the ground, but in the open, and inch or two of unbonded powder coated the wooden bridges. Even the studded tires spun.
The weapon of choice appeared to be a full suspension MTB with studded tires as I was on. Brian was on his 29r hardtail with studs and faired well, though the added plush of full-sus may have helped; and Sharon was on a snow bike. The snow bike struggled in these conditions, though did not complain.
A pair of meaty, unstudded tires would have been OK too, though the added grip of metal was helpful in more than a few places, including frozen creek crossings.
I didn’t have a camera, though my efforts to capture the beauty of this trail have never been successful.

Brian and I rode to where the trail crosses the highway in Divide and stopped in a sunny patch on one of the Seward Ski Club’s trails. The ambient was in the 40s as we snacked. Back in the much colder woods we were grateful for a few steep climbs to raise the thermostat a bit.

Sunday dawned a bit warmer, or at least it felt that way.

Theo, Sharon, Brian and I met up with Evie, who lead us on a 6-mile loop up and over the summit of Langille Mountain and back down Slaughter Gulch. 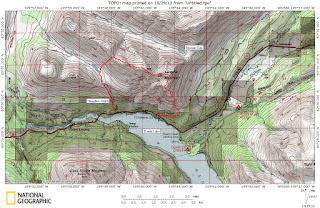 Evie, who lives in Cooper, gets creative credit for this loop, and guided us through the scree fields and gullies. Though a few times we goaded her when the "hardest part" turned out to be a plural description, this hike was a blast, and except for some 4x4 scrambling, avoided any exposure or cliff-age. 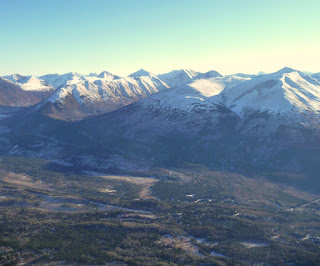 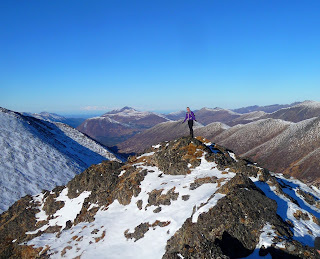 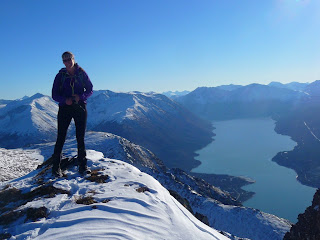 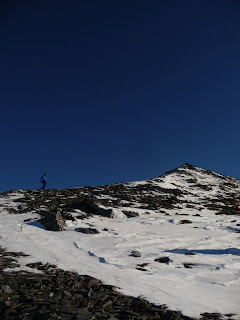 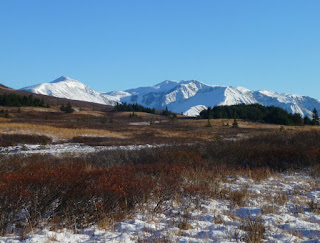 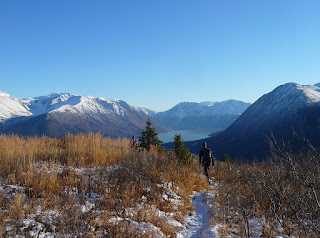 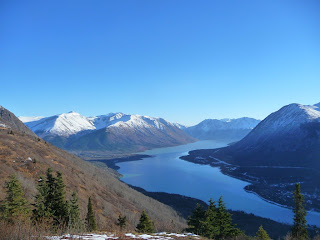