The Operation of the Crow Pass Cabin Kerosene Heater: A 3-Day Course

Someone hit the light switch. It's bright. The mellow days of incessant low-pressure systems drifting waywardly through Alaska packing gale-force winds has been usurped by success-driven, storm-blocking high-pressure, high-stress, corporate ladder-climbing ridging.
That means it's clear, sunny, and cold for the foreseeable future.
The skies began to clear last week and the temperatures dive bombed, but the passing of the storms has made for gorgeous evenings and after work pursuits.
I had Friday off, and after consulting with Keith earlier this week, a plan was set to join him and Mi Ke in Crow Pass and camp out and ski for the weekend.
Keith and Mike headed up on Thursday and enjoyed Friday on the sunny Summit Glacier mostly on their own.
I probably could have enjoyed a similar experience if I had risen at 6:30 when my alarm started buzzing, but I have been in a deep rut on early rising of late. Apparently sleep debt can't be ignored. I didn't hit the trail until early afternoon.

I was surprised to find skin tracks at the Crow Pass trail head on an optimistic two inches of snow, but coverage was enough to support it. I had my boards on within about an hour of slow trudging up the trail, happy to get them off my heavy duel-pack system.
The Crow Pass Valley was covered in wind-hammered slab on all sides. I just put a lift kit on the splitboard to give it more side-hilling torque while touring and appreciated it greatly.
Going was slow and painful. I hit the cabin around 4, and back-tracked toward the glaciers to catch Mike and Keith coming down the waterfall.


We were staying in the Crow Pass Cabin, an A-frame cabin maintained by the Forest Service the agency says can sleep 6, though we slept 10 cozily Friday and Saturday. The recently rebuilt shelter can be reserved  by the day from the end of May until the end of September. Outside of this season use is discouraged due to avalanche danger. As such, the cabin is free to use in this off period, but is first-come first-serve and at your own risk.
As the title of this post would suggest, the cabin has a kerosene heater that could best be described as finicky, but outside of this blog, I might use some more descriptive terms.
Mike and Keith hauled in a gallon of fuel on Thursday, but found the line from the 5-gallon welded tank outside the cabin frozen with settled water. The tank's fill inlet is a 3-inch 90-degree pipe with a hinged lid over the top that does not create a locked seal. After multiple storms with triple-digit winds and torrential rain and snow, it doesn't take a rocket scientist to figure out the tank probably got a fair bit of water in it, all of which ultimately settled into the low point on the copper feed pipe leading from tank to stove. After a short-lived success, the stove sputtered out on Mike and Keith on Thursday. With limited fuel for their cook stove, they didn't want to waste it trying to thaw the line and found themselves a bit more grateful for bringing their -40-degree sleeping bags as temps plummeted into the single digits overnight.
Not knowing of the problem, I decided to leave behind the -40 bag I had at my disposal in place of a lighter +20 bag and another gallon of fuel.
When I arrived to hear the news, I immediately got to work on the line with my canister cook stove trying to thaw the line to no avail.
Fortunately, Scott, a friend of Keith's who also came up Friday got the memo in a text Keith sent and brought vice grips and a small propane torch.
I took this to the piping, and after warming it enough it began to sweat. We undid a connection behind the stove. The line started draining ice and liquid that only faintly smelled of kerosene and quickly began to freeze.
Problem solved! We kept draining the line into a plastic bowl until we got sweet, sweet, hydrocarbons.
A few minutes later the stove was humming and we had heat, so we thought.

A half hour after we thought we had found success, Taro, one of our cabin mates, noticed the stove's carburetor was puking out fuel on the floor. Not wanting to make the feature story in the paper for burning down the brand new cabin, we shut it down. After dinner, Taro spent an hour rebuilding the the carburetor, and we had heat, again.
Of course, the line refroze, again, after the stove was shut off that night.
We were forced to repeat the thawing process again on Saturday night, sans the carb rebuild.

I think by day three we successfully earned our Crow Pass Cabin Stove Operator's Certs. Wish we had known these were required.


On Saturday I made laps on the Summit Glacier. The snow was soft, dry, and fast, underlain by a rock-hard icy base. By one count, there were 22 other snow seekers on the Summit/Jewel glaciers on Saturday. By the end of the day things looked Alyeska-like. 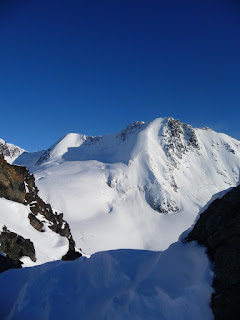 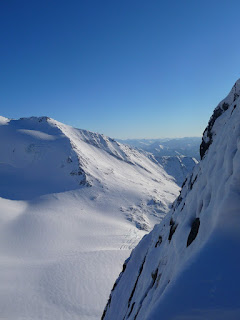 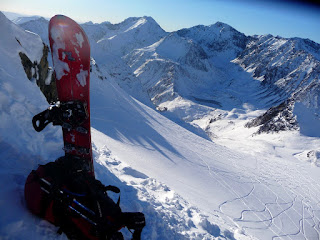 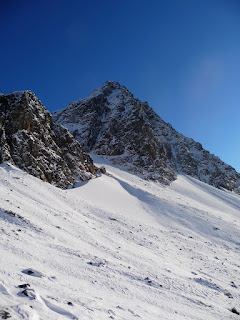 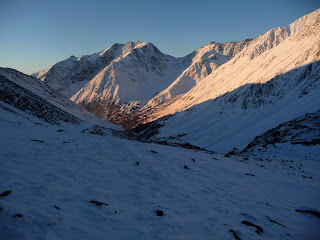 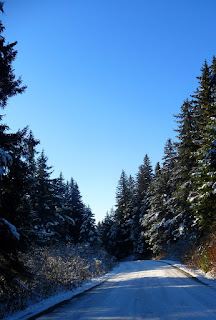